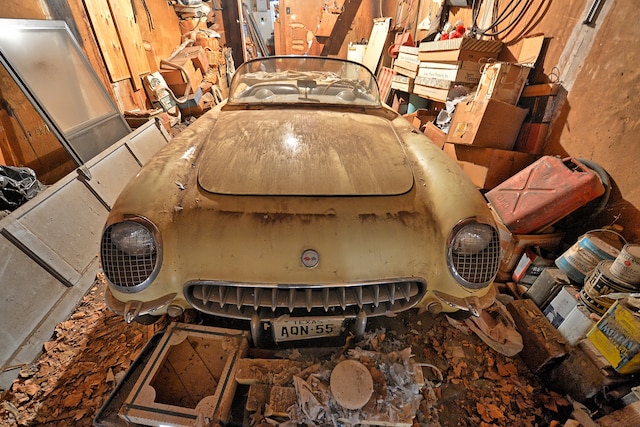 Bob Doucette has four grown children. The youngest two, who are 38 and 42, were asked if they’ve seen this Corvette? They have never seen it driven because it has been parked before they were born.

Bob agreed to take us where few people have gone, the car’s “at-the-moment, final resting place,” a single-car garage in his dad’s house.

Seeing this 1955 Corvette in a house of its same vintage, in the stewardship of an owner of 50 years, not for sale and never for sale, is a stark contrast to seeing a 1955 at a car show with no hint of a history.

“I was born November 13, 1950, and this is where they brought me from the hospital. I was raised here,” Bob said as we walked up two steps of a small concrete porch, flanked by tall evergreen trees.

“I kept this since my dad passed away. It looks inside like it did when my dad had to leave to go to the nursing home.”

Bob showed me the house key, worn almost paper thin from 50 years of use. Inside, the house was cluttered and a time capsule, from an antique stove, working in 1953, to the ornate 1950’s TV cabinet in front of which Bob sat as a kid and in his mother’s words, “too close to the set, you’ll ruin your eyes” to watch shows like Captain Kangaroo, The Mickey Mouse Club and The Wonderful World of Disney.

The ’55 was last registered in 1977 and has been stored inside in various locations through the years, and since the late 1990s in this garage.

When Bob’s father passed away in 2004, Bob simply locked the doors and left the place as is, which included safe storage for his 1955 Corvette.

We entered a small living room, turned left into a kitchen and opened a door to a single-car garage, completely dark. Bob flipped the switch to an overhead garage light to reveal the back end of a partially covered 1955 Corvette.

Maybe it was the vintage of the house. Maybe it was the dust on the car. Disbelief struck my retinas as much as light waves. I expected to see a 1955 Corvette as I had seen many times; but, the sight never struck me like this, in multiple freeze frames over a period of a second or two until my brain finally linked early Corvette images with what was before me, a vision from the past, transposed in the present.

Bob Doucette, seen here in 1974 with a couple trophies he won with the 1955, enjoyed autocrossing, drag racing and showing his Corvette for the first 9-10 years.

That sight was incredible. Never in my life had an old car jolted me into a distant past so resoundingly.

Bob drifted back 50 years to 1968, the year he graduated high school. His dad harbored a fascination with the Corvette from that first 1953 model, which was continued into 1955 with small changes and one big change, the Corvette’s first V-8.

In 1968, one of Bob’s friends spotted a for sale ad in the Amarillo, Texas, newspaper for a 1955. The price was $600, not exactly cheap for what it was, but not expensive either.

Doucette is quick to point out the black interior is not stock, same for the aftermarket steering wheel, which is vintage late 1960s. The seats are original, but not covered with stock upholstery.

The 1955 was not a creampuff. The numbers-matching V-8 was gone, replaced with a 283 bored to 301 cubic inches and timed by a Duntov cam. The car had “stalled out” from an amateur restoration, including a repaint, which explains missing trim on the sides, front, and stone guards over both headlights.

Although a graduation present for the son, the 1955 delighted the father, as well. Bob drove the Corvette 60 miles home to a small town in West Texas, and over that summer he and his father got the car ready for Bob to drive.

His college ride was a ’66 Caprice two-door, but Bob rented an old garage in the college town of Canyon, Texas, out of which he drove his sports car in the dual-use manner that Chevrolet intended, for street and track. He also joined a local Corvette club and participated in many shows throughout the next 9-10 years.

Originality does not matter with a car that the owner loves and never plans to sell. This 283 is not original, but came with the car in 1968.

The car’s last registration was 1977, when “raising the family” duties arrived. Once the kids were grown and gone, Bob never got the car out again, which begs the question. Rather than store the 1955, why not sell?

As Bob sorted through his mixed emotions, he said, “Let me think about that.”

Bob cited many reasons not to sell, starting with being a “pack rat” and a “holder-on’er.” He still derives enjoyment from owning the 1955, and is “comfortable” the car is “safe and out of the weather.” He also takes pride not to have “relinquished it and felt remorse selling,” as he has done with other vehicles over the years. Finally, Bob has recently retired and will have more time to get the car out of storage and running again as a driver. He has grandkids that are approaching prom days and have “expressed real interest to be delivered to the prom in the 1955 Corvette.”

“I never did change it paint, even though it wasn’t a super duper paintjob. It was presentable and very functional, and that’s what it still looks like,” Bob Doucette said. Originally red, the ’55 retains the pale yellow (perhaps 1966-’67 Corvette Sunflower Yellow) from the repaint done before Bob bought the car.

In the final analysis, this car is not for sale and cannot be bought. The memories are too strong. The car will one day go to his heirs.

“I’ve been saving it. Let them worry about it.” Vette

Bob Doucette held onto an amazing amount of paperwork and artifacts from 50 years of owning this 1955 Corvette, including his Corvette Club jacket, which still fits him.

Time Capsule 1955 Corvette That Runs and Drives Like New

Classics like this 1955 Corvette endure the test of time, despite many miles and many smiles along the way, it drives like new!

This Sebring 12-hour veteran, known as "The Privateer," is actually a 1955 Chevrolet Corvette. It was the only privately entered Vette in the 1956 race.

» Read More
1955 Chevy Corvette - The Corvette Is No Dog Anymore

See how this 1955 Chevy Corvette change the image of the Vette forever. Only at www.superchevy.com, the official website for Super Chevy Magazine.

It's the 50th anniversary of the 1955 Chevrolet Corvette that had the distinguishable gold v on the V8 emblem. It also received a Top Flight from NCRS, and is scheduled to be featured at Corvettes at Carlisle and Bloomington Gold displays this year for the 50th celebration of the '55 Corvette. - Corvette Fever Magazine

Check out this month's Right Hand Drive as we check out The British Classic Corvette Club UK and other European COrvette events. - Corvette Fever Magazine