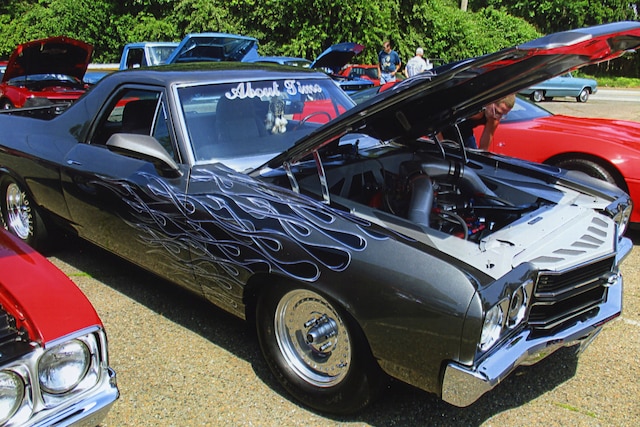 What an adventure it’s been for Steve Johnson and his 1970 El Camino. The Parkville, Maryland, resident had to endure over seven years and several fits and starts with shops that disappeared before he hooked up with Bob at Advanced Automotive Concepts to finish up his dream ride. After that long wait, Steve christened his Elco About Time ... fitting.

This is Steve’s second 1970 Elco. He got his first one in the ’70s, but had to part with it to pay some bills. It wasn’t until 2010 that he was able to start looking for a replacement. He found a 1969 model but it was deemed too far gone, so the search continued until he found this second, 1970 model, which was in much better shape to start his build.

Steve says he’s taken home awards from every show he taken the Elco to so far, and it’s easy to see why. The body has been coated with a base of Tunnel Ram Metallic Gray from Eastwood. The custom flames lick across the cowl-induction hood and down the sides to mid-door.

Under that hood is a Dart-based engine that cranks out over 640 horsepower at 6,400 rpm on C12 race gas. For a little extra kick when he needs it, Steve added nitrous. An MSD 6AL box lights the fire and Hooker Super Comp headers expel the fumes. A 4.11-geared 9-inch sends power out to the 15-inch Center Line wheels wrapped in Hoosier Quick Time Pro 28x11.50 tires.

Extra bits to up the go and whoa factors include Wilwood brakes, trans brake, line lock, and parachute.

Though Steve as yet to take his Elco to the track, he is confident of low 11s if he doesn’t smoke the tires. To help him extract all the horses from that Dart bullet he can flip a switch and run the headers wide open. What are you waiting for, Steve? It’s About Time!