This shoebox Nova has led many lives; this is the best of all 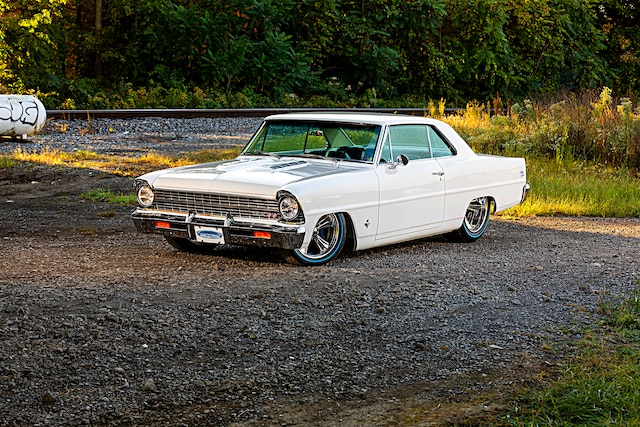 There’s always a story to a hot rod build. The story behind this 1967 Nova SS owned by Mike and Jennifer Rutter of Rutterz Rodz sure has an interesting heritage. “I’ve held the title to this car for over 20 years. It was purchased in Soddy-Daisy, Tennessee, as an uncut, original, true SS car, Butternut Yellow paint with black interior,” says Mike Rutter.

The plan for the car when purchased was to perform a true-to-form original restoration, and it sat for a long time in the garage awaiting its turn alongside a black/black ’67 Nova SS that was already disassembled and stripped. “As a hot rod builder, it’s sometimes hard to find time to work on your own projects,” he says. Time goes by, customer jobs get priority due to the requirement to keep the lights on, and before you know it, a quarter of your life has passed.

A few years back, the shop had completed a ’32 Ford Roadster for a customer—Mike Bunch of Tennessee—which went on to perform quite well at car shows and NSRA events in its first year on the circuit. The car won several awards, was a finalist for the Street Rod of the Year in Columbus, and appeared in several magazines, gaining Rutterz Rodz enormous recognition in the process. Then it was time to drive the ’32, and start on a new project. It was down to two options: a ’59 Impala and a 1966-’67 Nova SS. You might see where this is going.

Well, maybe not. Since they searched and searched for a ’59 Impala and were unable to locate what Mike Bunch was looking for, they turned to the Nova concept. At the time, Rutter was totally uninterested in selling the Butternut Yellow car that had been sitting in the garage all this time awaiting his deft touch. But reality dictated otherwise, and eventually he realized that if he wanted to see the car finished, the best course of action was to pass it along to Bunch, who had the ability to bring it to life.

Remember back at the beginning where we said the car was uncut? To bring Brockmeyer’s rendering to life, the floors, firewall, trunk pan, and wheelwells were all removed, leaving the outer shell and skeleton of the car. “We cut up and threw away some really good sheetmetal. But I’m a firm believer if you’re gonna cut one up it might as well be a good one,” says Rutter.

With a new frame from Art Morrison underneath the shell, all-new pans, transmission tunnel, and wheelwells were constructed to fit all of the custom pieces Bunch wanted. However, the stock lines of the Nova were basically retained, with the exception of the rear wheel openings in the quarter-panels, which were stretched 3/4-inch to accommodate the larger-diameter rear tires. The stock fuel filler panel in the left quarter-panel was removed, and a concealed filler was added at the top of the quarter-panel, with bodywork completed by Jonathan Tolley at Rutterz Rodz. The hood was designed to resemble other muscle cars of the time, yet retain its unique looks. As such, a combination of ’67 Chevelle and ’67 Nova lines were chosen, and Clay Cook Machining manufactured one-off aluminum hood inserts.

The Art Morrison frame was equipped with the company’s tubular A-arms, parallel four-bar rear suspension, power rack-and-pinion steering, Aldan coilover shocks to get the ride height correct, and Wilwood brakes to bring the car to a stop. Since this car had sat in the garage for all that time, Rutter had collected a myriad of N.O.S. parts to be installed: grille, bumpers, bumper guards, emblems, headlight bezels, driprails, and more. Bunch was able to convince him to part with those in the interest of building the nicest car possible. Dan’s Polishing Shop of Adamsville, Tennessee, tuned up all of the chrome. Eventually, the body and car were completed to the primer stage, where it was just about ready for final disassembly and paint. And then the phone rang. It was Mike Bunch. He had located a ’59 Impala and wanted to place the Nova build on hold. Rutter had Eric Brockmeyer do a new rendering, and a year later, Mike Bunch had his show-winning big-block Impala. But this story is about the Nova. After the decision to build the Impala was made, Bunch asked Rutter for help selling the Nova.

“Heartbroken, I said yes. I hoped to find someone who would allow us to finish the car since all the hard work was done, but knew there was no guarantee,” Rutter says. Just a few days later, Bunch asked Rutter why he didn’t buy the car back. “I obviously knew the asking price and said thanks, but I could never afford it. A few more days went by and he kept calling wanting to sell me the car. Long story short, Mike Bunch went above and beyond, working with me until he saw it through that I got my car back,” says Rutter. Since the car wasn’t paying the bills anymore in the form of an ongoing build, it took another three years until Rutter could clear enough time in the shop’s schedule to push it back to the head of the list—and as we can all see from the final result, the wait was worth it.

“Although the plan had been for black/caramel, I decided to flip the page and do something I had never dreamed—paint the car white! I chose the colors of the then-new 2013 anniversary 427 Corvette and off we went,” Rutter says. 1967 Nova buckets were covered in blue leather, custom door and side panels were finished for the car, and the original four-speed console was modified. Upholstery was done by Paul Atkins Interiors. The audio system includes a Pioneer CD/DVD head unit and a full complement of Memphis Audio speakers, amplifier, and subwoofer, all installed by Benny Broyles at Rutterz Rods.

Rutterz developed a set of custom headers, sent them out to be coated by Performance Coatings in Georgia, then did up a set of mandrel-bent tubes out of 16-gauge ceramic-coated mild steel to get the fumes back to the 2.50-inch Flowmaster mufflers, where they exit into the atmosphere, screaming “’Merica” all the way.

The rest of the drivetrain consists of a five-speed TREMEC transmission built by Silver Sport Transmissions, which feeds the power through a custom driveshaft from Bowman Driveshaft of Johnson City, Tennessee. The 3.70:1-geared Ford 9-inch housing from Currie Enterprises features a limited-slip differential and a polished center to give it exceptional good looks.

Custom, one-of-a-kind wheels were manufactured in 17x7 front and 20x9.5 rear dimensions, and wrapped in BFGoodrich g-force KDW tires measuring 215/45R17 and 265/50R20, respectively, to finish off the car’s dazzling appearance. At the end of the five-year build process, Mike Rutter ended up with a Nova to be proud of, even if it didn’t fit his original plan of an original restoration. Ultimately, this car doesn’t come to life without the support of Mike Bunch, who was willing to do what it took to get Mike Rutter’s name back onto the title of this stunning hot rod.