1962 Corvette Restored and Customized for Show and Go 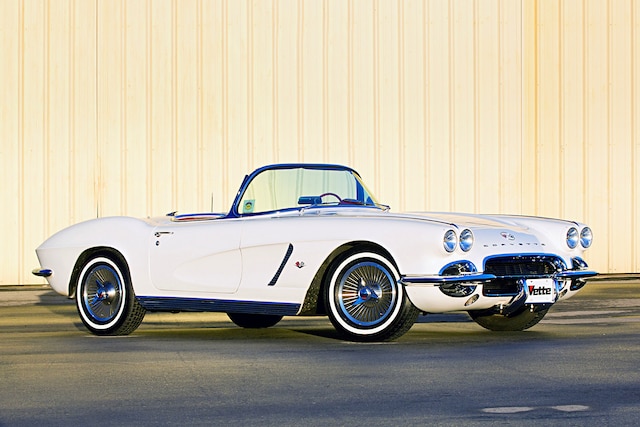 There are car guys and then there are Corvette guys, but that doesn’t mean a car guy can’t become a Corvette guy. Take, for example, John Gendelman of Flemington, New Jersey. John owns what might best be described as an eclectic mix of mid-modern American automobiles, with representation from both Ford Motor Company and General Motors: a ’57 T-Bird, a ’50 Cadillac and a ’62 Chevy stepside pickup just to name a few.

This is not to say John’s desire for a Corvette is a recent development. On the contrary, he’d been searching for a 1962 Corvette for quite a while. It was a different ’62 model on eBay that lead John to the Ermine White ’62 featured here. John told a friend about trying to deal with a cantankerous seller on eBay with a chronically listed car and the friend told John of this ’62 Corvette, which was located just around the corner from John’s office.

John met with the seller and it didn’t take long to split the difference between John’s offer and the asking price. It was an unmolested driver in good condition that was still in the original owner’s family. It was perhaps being equipped with a Powerglide transmission that cast the ’62’s fate as a good starting point for what John had planned. Typically, Powerglide Corvettes aren’t exposed to the type of service a stick-shift car sees. Under the hood, behind the last year for a cast-iron case Powerglide, was a first year SD code 327 with 300 horsepower.

John drove the ’62 for a brief period of time before he decided its primitive qualities needed modern enhancement, but no modifications could take place that couldn’t be reversed. Enter Paul Comeau and the Corvette Shop of Montgomery, New York. The Corvette Shop’s first tasks were to upgrade the suspension, steering and brakes. Adhering to John’s keep-it-reversible mandate, the stock ’62 Corvette IFS with recirculating ball steering and drum brakes hung from spindles on bushed kingpins was removed as a unit and replaced with Jim Meyer Racing Products 1953-’62 bolt-in front steer crossmember.

Under the hood where a 300-horse 327 once was there’s a 1971 350 with a mild bore out to 355 inches. Chevrolet Orange engine enamel with a stock ’62 Corvette air cleaner helps to impart an original look and to conceal the FAST EFI on an Edelbrock Performer intake manifold. A stock, polished stainless steel ignition shield conceals a Delco-Remy points and condenser type distributor upgraded with PerTronix inductive-type ignition with a mechanical tach drive Delco-Remy generator completing the stock look. A DeWitts Direct Fit aluminum radiator in conjunction with a six-quart finned aluminum oil pan keep the engine cool.

The Corvette Shop looked to Al Knoch Interiors for the ’62’s interior restoration and upgrade needs. At the Corvette Shop, a foundation of Dynamat was laid over the floor and transmission tunnel followed with underlayment and red loop pile carpet matching 1962 OEM specs. The stock red vinyl buckets were replaced with a pair of Al Knoch Interiors complete bucket seats upholstered in red leather. A pair of new door panels, sill plates, cranks and knobs completed the doors. The almost undetectable from a stock Corvette radio is a RetroSound AM/FM head unit.

Having been repainted only once, the paint was in great condition when John bought the ’62. The original owner stuck with Ermine White, but opted for a more durable, glossier basecoat/clearcoat done in PPG urethane. The Corvette Shop did not restore John’s ’62 all at once. In between driving the car quite a bit, John would bring it in to repair a road scar or keep making improvements. At one of these times all of the chrome and stainless steel was removed and sent to Virginia Vettes for re-chroming and polishing.

John Gendelman has the Corvette bug now and there’s no turning back. He recently added a 1965 Sting Ray convertible with a 365-horse 327 and a brand-new C7 Z06 to his mid-modern mix. Having the new Z06 doesn’t mean the ’62 doesn’t get driven. On more than one occasion, including a 2014 jaunt down to the National Corvette Museum in Bowling Green, Kentucky, John recollected pulling down the highway miles and feeling like he was Tod or Buz driving on Route 66. Vette