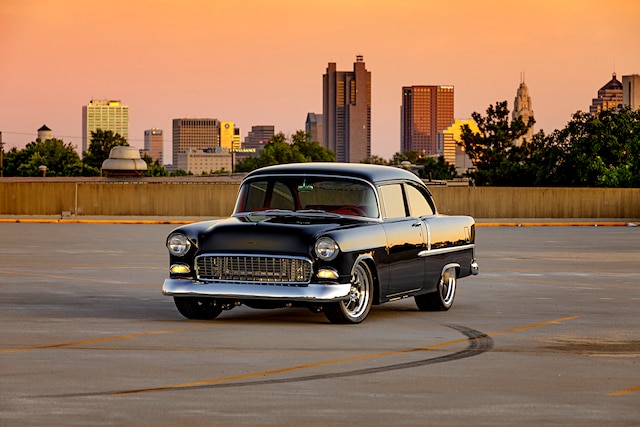 The 2018 Danchuk Tri-Five Nationals in Bowling Green, Kentucky, was a testament to the copious amount of surviving Tri-Fives. With nearly 3,000 examples of the breed hogging nearly every square inch of Kentucky green grass at Beech Bend Raceway Park, it was clear the species is far from extinct. Tri-Fives produced over 60 years ago continue to be American icons.

A staple of the event, now in its fourth year, is the building, and subsequent giving away, of a Tri-Five Chevy to one lucky attendee. Previous giveaway cars have included all three years of the Tri-Five. This year, the build, backed by Golden Star Classic Auto Parts and Woody’s Hot Rodz, was another 1955 Chevy. It was awarded at the show and the lucky new owners are Florida residents Charlotte and Phillip Reedy. The couple was picked at random and are now the proud owners of this vehicular masterpiece. But, there’s something a little unorthodox about the car the Reedys now have in their garage. You see, this ’55 Chevy isn’t 63 years old. Sure, it looks the part, but the ’55 you see before you was built in 2018—out of 100-percent new parts. No, that doesn’t refer to only the chrome, body, or ancillary parts, but the whole shoebox enchilada.

As many 1955, 1956, and 1957s that are lovingly restored and maintained every year, there would be far, far less without the aid of reproduction parts. Without them, such restorations simply wouldn’t be possible. “I remember being a kid and my dad dragging my brother and I to the junkyard,” said Woody’s Hot Rodz owner Chris Sondles. “I carried the acetylene bottles, he carried the torches, and we would cut parts off of ’55 Chevys. Today, you can pick up a magazine or go online and you can build that car. It’s amazing!” For the Golden Star Classic Auto Parts giveaway car for 2018, the Woody’s Hot Rodz team took the concept of reproduction one step further. Rewinding to the beginning of the 2018 calendar year, this is how they built the first-ever 100-percent reproduction ’55 Chevy.

The build began with an official Chevrolet licensed frame, built by Woody’s Hot Rodz. This is the second licensed frame in the world (the first is at the General Motors tech center where it was officially certified). Naturally, an officially licensed ’55 Chevrolet body was the only option to set atop it. The body was assembled panel by panel by the skilled hands of Jerry Taylor, and the silhouette of a ’55 began to materialize. Once assembled, Tim Maurer and Brian Graber perfected the bodywork. Brian then expertly laid down a slick black paintjob using all Axalta products. Finish brightwork was installed, bumper-to-bumper and is all direct order from Danchuk.

The Tri-Five Chevy gained notoriety not on looks alone, but on the potency and easy-to-add horsepower of its small-block Chevy heart. With this in mind, the powerplant of the ’55 had to follow suit. Ed Rinke Performance out of Center Line, Michigan, supplied a 435hp LS3 and 4L70E transmission. A Holley Dominator EFI system was added to the mix to deliver fuel and daily-driver reliability to the new-formed Chevy.

Inside the car, the Woody’s team strived to make the ’55 as ergonomically functional as the drivetrain and achieve a “new-car” level of refinement never before seen in this era car. That began with a healthy spread of Dynamat Xtreme to quell heat and noise and a thoroughly modernized American Autowire electrical harness to power the modern amenities such as the Vintage Air Four-Vent A/C system and Dakota Digital VHX gauges.

Next up was the interior, which is the cornerstone of this car. Rather than an expensive trip to the upholsterer, Woody’s turned to TMI. “What TMI has done is made a job that was limited to a very small number of craftsman upholsterers around the country simple enough to do in your garage over a weekend,” said Chris Sondles. “The entire interior was installed in about 12 hours and came headliner-to-carpet on a pallet straight from TMI’s Corona, California, facility.”

Dressing up the immaculate interior even further are accouterments of billet: Eddie Motorsports hinges, handles, and assorted bling. All of the precision driving controls, such as pedals and shifter are courtesy of Lokar Performance, with an ididit tilt column providing the steering action.

As a car that could be daily-driven, powertrain and creature comforts are key. But to truly be a driver, even the subtleties of function needed ironing out. For that reason, a Raingear wiper setup, which moves the wiper motor under the dash and makes the wipers far more functional was instituted. No one plans to drive their ’55 Chevy in the rain, but such is life and this one is certainly ready for whatever Mother Nature throws at it.

Countless man-hours went into the Golden Star Classic Auto Parts Giveaway Car, which when combined with the best parts in the business, yielded an inspired recipe for a car that never was, but now is. Where there were bits, pieces, and parts now a beautiful, recently re-homed Tri-Five exists.

So how does the Golden Star ’55, a car birthed by hot rod hands out of a wish list of parts, drive? Does it live up to the standard of a 21st century Tri-Five? You better ask the Reedys as they just drove it 510 miles home. Oh, if you want a brand-new ’55 for your stable, Woody’s Hot Rodz will soon be building them from scratch. More on that to come.