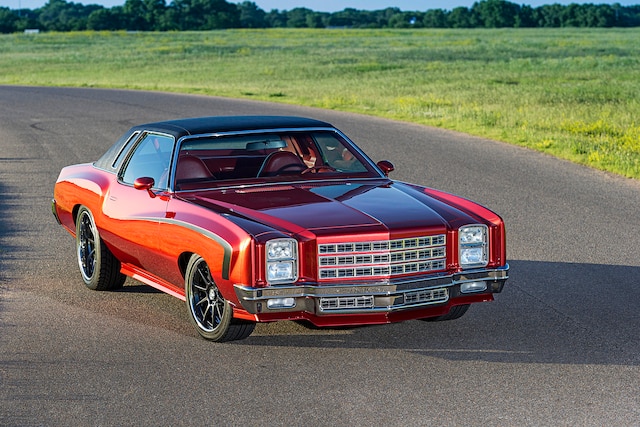 Brent Diel knows this firsthand. This 1977 Monte Carlo isn’t his first car. “When I was 16, I had a ’77 Monte Carlo,” he says. He was a high school sophomore. “I painted a stripe on the front fender and put on some wheels and air shocks. I had a lot of fun with that car.”

But as humans are known to do, he moved on just after graduating in 1980. “I bought a 1978 Mark V Lincoln,” Brent says (when we joked that the proceeds went to put gas in the Lincoln, he laughed it off … but he didn’t deny it either). “We kept that maybe eight or nine years,” he says.

Despite the procession of cars that followed, Brent says he never quite forgot about the Monte he and his now-wife, Leysa, cruised in high school (thankfully he had the foresight to see the value in that relationship). “We always looked around for another one like it.

“Then one day this really nice ’77 shows up at a Mecum auction in Kansas City,” he continues. “But it was on television and it was a replay—we missed the auction. We really wished we would’ve been there.

“Well, a few months go by and my wife was up real early one morning and saw it again on the Internet. A trader up in Great Bend (Kansas) bought it at the auction and he was selling it.” Recognizing the great fortune of their find, they loaded up immediately and made the drive up to buy it.

But just having a car like the one you had in your youth isn’t quite enough. Remember that the ’70s—particularly the late ’70s—were the peak of the Malaise Years.

During that period, the performance measure of an American car was set against the backdrop of emission-control disappointment. This was a period when the hottest engine in GM’s hot-car flagship, the Corvette, made only 210 hp. So any fun that Brent and Leysa had when Carter was in office was tempered by the notion that everything else sucked, too. And to make the case worse, the Diels grew pretty familiar with the performance gains achieved over the past four decades. Which is to say the car felt a little disappointing despite the 12,000 miles on its clock. This was a 170-horse engine on its best day. To paraphrase, there wasn’t much there there.

So they consulted Tim Devlin at Devlin Rod and Customs in Wichita, Kansas. “He’s redone some cars for me for seven or eight years,” Brent says. “We wanted to redo it but we weren’t sure what we wanted to do.” Tim had Tavis Highlander render the car with a few treatments.

The Devlin crew yarded off the front clip, yanked the drivetrain, and tended to the chassis, updating the suspension with a host of products from Detroit Speed and Hotchkis Performance. Though basically new, the 350/350 could never aspire to a fraction of the performance of the Don Hardy-built LS3 and a Phoenix-built 4L80E that went in their place.

The rest of the effort went into resolving the aesthetic issues. To tuck the bumpers, Devlin’s fabricators replaced the various filler panels that went between the bumpers and the body with steel ones that weld to the quarters and fenders. A hand-fabricated ground-effects kit visually brings the car closer to the ground. And yes, after Ryan James shot the custom-mix red finish, Justin Titus applied stripes in the likeness of those Brent whipped up decades earlier.

The interior remains basically stock with only gauges and a shift quadrant to accommodate the new drivetrain—after all, unless you’re racing, there’s hardly a way to outdo GM’s swivel seats. And Devlin went so far as to use the stock shift knob on the Lokar assembly. A RetroSound stock-appearing head unit belies a rather elaborate JL Audio system.

Though immediately recognizable and seemingly quite faithful to its original form, Brent and Leysa Diel’s remastered Monte is hardly comparable to the one they cruised in high school. But that’s the kind of overachieving pursuit it takes to restore the way we felt when we didn’t really know any better. Just the independence granted by a driver’s license is excitement enough to a newly minted driver. But there’s no doubt that this car is 10 times as fun as anything the Diels remembered.

You may only get one chance to have a first car. But sometimes, if you play your cards right, the one you get to replace it can be that much better. Just ask Brent Diel. CHP