Meet the Ultimate Sleeper 1966 Chevelle: A Sleuth With a Quad-Cam LS7 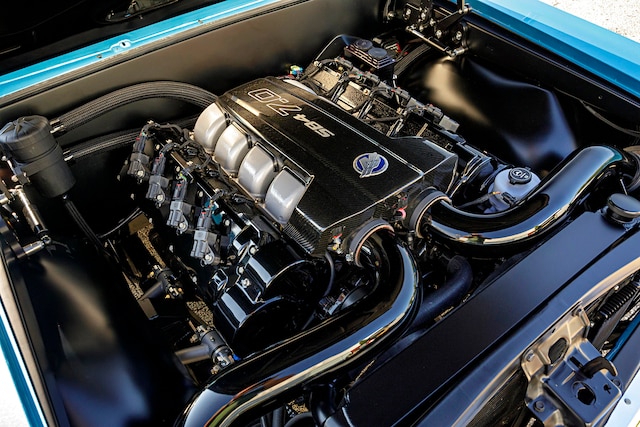 Things are often not as they seem. In the automotive world, that concept can be exciting or embarrassing, fun or infuriating. It all depends on which side of the unexpected you’re on.

William Fox is solidly on the fun side of the unexpected spectrum. His mild-appearing Chevelle, built by Roadster Shop and sporting a Mercury Racing 32-valve, quad-cam LS7 under its hood, is the sleeper no one saw coming. It’s an engine that walks the line between American muscle and fiery Italian exotic and makes the Chevelle a truly rare bird.

The Chevelle began—as many projects do—with a hunger for something cool to drive and a call to Roadster Shop. “I’ve been a car guy my whole life,” said Fox. “All the other kids would read comic books and I’d read the Car and Driver Buyers Guide and hot rodding magazines.”

This Chevelle wasn’t the first in Fox’s classic auto stable. He’d had many older, very original rides, but found that he didn’t drive them much. “They were way too nice to cut up, but they just didn’t drive that great,” said Fox. “I really wanted something that I could drive every day.”

An active dad with three kids, Fox needed a back seat, and had always had a penchant for the look of the 1966 Chevelle. He called up Roadster Shop looking for a shop recommendation to take on a build and “it all spiraled from there,” he laughs.

The specimen sourced to build Fox’s dream Chevelle was a 1966 model and a former Goodguys Muscle Car of the Year finalist. It was an older restoration that was in good shape and a perfect candidate for one of Roadster Shop’s Survivor Series builds.

“The Survivor Series is a full mechanical restoration where we don’t touch the paint, chrome, or glass,” said Josh Henning of Roadster Shop. “It still gives a vintage vibe, but you can drive it and not worry about rock chips. It’s also a lot more wallet friendly because we aren’t painting, doing bodywork, or tucking bumpers.”

The car arrived at Roadster Shop where it was stripped down and treated to a host of modern technical bits to make it a competent daily driver.

A Roadster Shop Fast Track chassis was slid underneath and on it were hung Baer 14-inch/six-piston brakes front and rear, a TREMEC Magnum six-speed transmission, and a Strange 9-inch differential. Penske Racing coilovers with custom valving handle suspension movement. To nail the stance and look, a quartet of Roadster Shop OE2 wheels, made by Forgeline sit at all four corners. “They give the car a steel wheel look—sort of a mid-’70s street-car vibe,” said Henning. We agree. We thought the Chevelle was riding on steel and had no idea they were high-tech Forgelines until we looked closer. Adding to this minimalist look is that the lettering was shaved from the sidewall of the tires.

Inside, Recaro seats and Dakota Digital gauges provide a subtle pinch of modern, while custom touches, such as machined air vents in the dash, set the Chevelle apart. Modern amenities such as power windows and air conditioning are also included. Rather than showstopping paint and smooth-as-glass bodywork, Fox instead checked all the boxes to make the car a great driver.

The aforementioned engine is inarguably one of the coolest, most unique elements of the build. “It’s a new-school take on the LT5 from the ’90s Corvette ZR-1,” said Henning. The engine spins to a stratospheric 8,000 rpm and delivers an eardrum assaulting 750 hp to the crankshaft. Codenamed SB4 by Mercury Racing, the engine is based on a GM LS7 engine block, but treated to a set of proprietary 32-valve cylinder heads. The heads flow significantly more air than the factory LS7 pieces—which are very good—and provide the necessary deep breathing to expel 750 hp at the engine’s 8,000-rpm redline.

“It plays with your senses,” said Henning. “Normally you shift by sound, and when you want to shift this—or think you should—you have about 1,500 rpm to go. You have to look at the tach and tell yourself not to shift. It comes on like a light switch at 4,000 rpm and does not stop pulling until redline!”

To somewhat mask, but also enhance, the sound of the engine, Roadster Shop rigged up a trick exhaust to deliver the best of both worlds. “We did dual X-pipes and staggered them at specific distances to give it a unique sound,” said Henning. “At idle it sounds like a cam’d big-block and when it revs it sounds like a Ferrari. It’s a lot like what 180-degree headers would do and it yielded the right sound—it’s wild!”

The SB4 engine was developed specifically for automotive use, and according to Henning, it’s pretty much like any other LS swap, minus custom headers, which Roadster Shop plans to sell.

With the car all put together, Fox picked it up at the Goodguys show in Fort Worth, Texas, and drove it back to his Houston headquarters. First impressions: “It’s amazing. It cruises down the freeway at 2,000 rpm, but I can stomp on the gas and it’s like a rocket. It revs to 8,000 rpm! With the Roadster Shop chassis and suspension it drives like a new car.”

Fox really does drive it every day, and his son especially, age 7, can’t get enough of the Chevelle. “It’s the ultimate sleeper,” said Henning. “It’s so unassuming on the outside. You wouldn’t think anything is done to it, and you’d have no idea what it’ll do once it revs.”