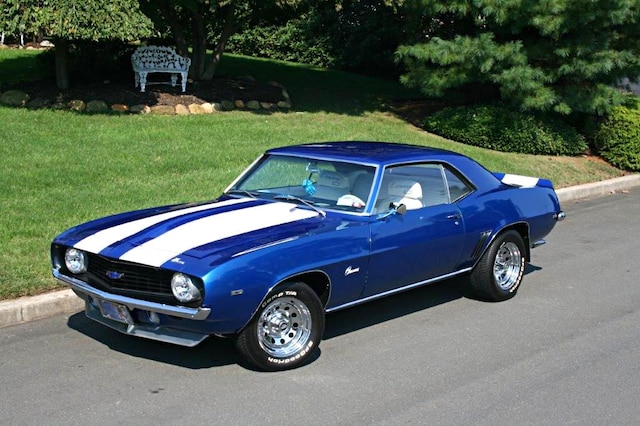 This 1969 Chevrolet Camaro is Jason Vendetto’s first car. Back when he was 16, it was grey with a blue interior. Over the last 24-plus years, Jason performed the restoration work and transformed the Camaro from an eyesore into a showstopping award winner. Among the many awards the Long Islander has taken home over the years include Best Chevy, Best Engine, Best Interior, and Best of Show.

John Rasmussen of Cedar Falls, Iowa, has fully embraced the “land shark” meme of his 1972 Chevrolet Monte Carlo. Built up over seven years in a two-car garage, John and his daughter Melanie got it on the road in October 2017 and have so far put about 5,000 miles it. They nailed the ’80’s period look they were after with the 2-inch cowl-induction hood and Weld Racing Double Nuckle wheels. Under that fiberglass hood is a 383/TH400 combo feeding back to a narrowed 9-inch rear. The interior has been treated to a custom interior and swivel buckets, with Melanie doing the sewing work. The paint is a combo of 1970 GM Black Cherry and a modern Black Cherry Pearl, with a 1/4-inch silver stripe to break ’em up.

Bert Smeets of Belgium stumbled upon this 1978 Camaro Z28 race car on a trip to the Netherlands. Research done on the Z28 revealed it was originally built to compete in the Dutch Touring Car Championship and the annual 24 Hours of Spa race for racing driver and car journalist Hennie Hemmes. The Camaro was actively raced in the DTCC from 1978-’86, winning the championship in 1984. The refreshed 355ci engine makes around 470 hp and 455 lb-ft or torque. The Muncie M22 gearbox sends power back to a 3.55-geared 12-bolt. It has been restored to resemble the livery it ran with during the 1979 season. The “big old girl” is back in action at classic touring car events, and was even reunited with Hennie for a few historic events.