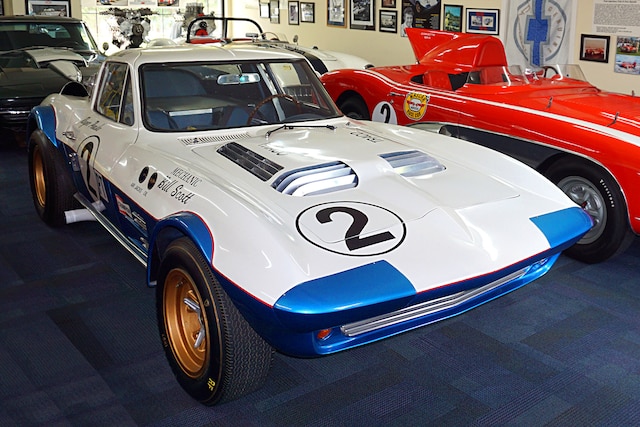 The 1963 Grand Sport Corvettes constitute the greatest of all Corvette legends, not because of what they accomplished, but for what they could have accomplished. Let’s go back to the original plan.

The 1957 AMA Racing Ban took the wind out of Chevrolet’s sails. Knowing that a full-out Chevrolet racing team could not happen. Zora Arkus-Duntov pitched a concept to Chevrolet General Manager, Semon “Bunkie” Knudsen. Duntov knew that Knudsen was an easy sell because Knudsen was behind Pontiac’s NASCAR effort.

Early in 1962, Duntov learned about Carroll Shelby’s lightweight Cobra. Duntov’s team was working on RPO Z06, but knowing that the Z06 would weigh 1,000 pounds more than the Cobra, Duntov proposed to Knudsen a lightweight Corvette with a tube frame structure, modified production suspension parts, Corvette power and a lightweight replica body. To qualify as a “production” car in FIA rules, Duntov needed to build 125 cars. Then, they would build 1,000 lightweights to be sold through Chevrolet dealers for around $10,000. The concept was to engineer a race car and let privateers do the racing. Knudsen approved the concept and green-lighted Duntov to get started.

All of the Grand Sports wore various liveries. The white and blue paint with red trim and the #2 livery is from the 1964 12 Hours of Sebring race where #005 with Penske and Hall driving took a class win.

The “Lightweights” were built on a round steel tube ladder-type frame with a built-in roll bar. The front suspension had thinner, lighted A-arms and an aluminum steering box. The rear suspension was the same as new Sting Ray’s, except for the aluminum differential and drilled control arms. Girling solid disc brakes with solid rotors were used. The interior looked like the new Sting Ray’s, but was all fiberglass.

The lightweight fiberglass body was similar to the Sting Rays, with the following differences: the headlight were built into the body and had plexi covers, the turn signals were built into the grille area, the rear window was minus the “Mitchell split” and the corners had a larger radius, there was a trunk area to store the FIA-required spare tire, the side pipes had small mufflers and the Halibrand knock-off magnesium wheels were shod with Firestone racing tires. Duntov had plans for double-overhead cam hemi heads and all-aluminum small-block engines. This was an all-out race car that looked almost like a stock Sting Ray, but weighed just 2,000 pounds.

By December 1962, five cars, now called “Grand Sport” were completed. Duntov took Grand Sport #001 to Sebring for testing. The car attracted attention and word got back to GM’s Chairman of the Board and staunch supporter of the AMA Ban, Frederick Donner. Knudsen was called in on the carpet and ordered to stop all work on Corvette race cars or sacrifice his annual bonus! According to Duntov, the Grand Sport project came to a screeching halt!

When Jim Hall had #005, Chevy R&D was building the engines. But when Penske had #005, he felt that Traco engines were better.

The story gets almost ghost-like with Grand Sports #003, #004 and #005 showing up at races in the hands of privateers with changing liveries. Duntov called the three cars back at the end of the 1963 season for some “upgrades.” When the three Grand Sports arrived at the Nassau Speed Week as Mecom Racing Team cars, they looked like bad-ass racing machines, sporting fat tires, big fender flares, scoops and vents. Best of all, they kicked the Cobra’s butt.

From the Nassau race forward, the Grand Sports moved from team-to-team, being bought and sold, each time with different liveries and reconfigured with different hardware. It’s not easy to follow the progression of #003, #004 and #005. But for this story, we’ll focus on #005 because that’s the Grand Sport that is currently owned by Bill Tower, of Plant City, Florida.

Of the five Grand Sports, #005 was the most winning, scoring its biggest win at the 1964 12 Hours of Sebring, taking 1st in class, with Roger Penske and Jim Hall driving. By this time John Mecom owned #003, #004 and #005. Before the Sebring ’64 race, Mecum sold #005 to Jim Hall. Recently hired Corvette development engineer Bill Tower and was part of the #005’s crew. Tower was so impressed; he wanted a Grand Sport. Later that year, Hall sold #005 to Penske who took the car back to Nassau at the end of the year and took 1st place in the Tourist Trophy race. Penske then sold #005 to his friend George Wintersteen (who later bought #002, the roadster) who raced the car at the 1965 12 Hours of Sebring taking a 2nd place in class.

Chevy engineers put the differential cooler on the Grand Sports at the 1963 Nassau race because the differentials were overheating. Later, they came up with better differential grease and didn’t need the cooler. Note rear fender vents and the vent holes in between the taillights.

When Dave Erwin saw the Grand Sport at Sebring in 1965; he too wanted the car, so he carefully followed Wintersteen’s racing activities. In the fall of ’66, Wintersteen sold #005 to Dave Erwin, minus the engine. The car was in pretty good condition, but missing the clear headlight covers, the differential cooler and air jacks. Erwin installed a mildly worked 327 with fuelie heads, a Crower Cam high-lift kit, an aluminum intake manifold, a big Holley carb and headers. Erwin did some restoration on the car and at one point, but he never drove the car on the street.

While Erwin was enjoying #005, Tower reached out to him, Corvette guy-to-Corvette guy, and would occasionally ask if he was interested in selling. Finally, in December 1978, Erwin decided it was time to sell and Tower was there to buy. On December 24, 1978, Tower drove up to Painted Post, New York, to trailer home Grand Sport #005.

The trip home was a nail-biter, as Tower had been warned about the dreaded northeast “black ice.” Tower recalls, “With all those overpasses I was scared to death. I knew if I could get past the Mason-Dixon Line I’d be OK.” After Tower got #005 home, he decided to just refresh the car. Tower recalls, “The car was basically intact, but very used up and hadn’t had much maintenance. The lower rear valance had hundreds of small holes caused by small rocks hitting the thin fiberglass. I had to Dremel out the holes and put glass in them to restore the back panel. There was also some minor damage in the front valance. I block-sanded the body to smooth it out and had it repainted the same blue and white combo as when I got the car. Then I had my artist friend Bernie Little re-create the lettering in paint, not vinyl. The car had no engine but I was able to get aluminum 377 from Chevrolet R&D, but it wasn’t easy. I got a set of fiberglass headlights covered from Jim Hall and clear covers from Bill Scott. The inside of the car is untouched.”

After #005 was completed, Tower trailered the car to Sebring to get some lap time. Tower said, “I didn’t do anything all out, just some laps. It handled great and was very strong. I just wanted to get the car on the track where it had won its class in 1964.” Since then Tower has taken #005 all over the nation: California, Mackinac Island, Texas, Amelia Island, Daytona, and regional car shows. Tower said, “Everywhere I show the car people say, “There’s that Grand Sport!” I asked Tower about the car’s worth, he said, “I have no idea. I didn’t buy it as an investment. I bought it to preserve the car’s history. This December I will have owned the car for 40 years.” Vette

As Grand Sports were being built, slight improvements were made as #005’s windshield is raked back slightly and the body about 7/8ths the size of a stock Sting Ray.

The all-aluminum 377 was exotic stuff in 1963. If aluminum alloys had been better, durability wouldn’t have been an issue.

The 58mm Weber carbs are mighty impressive. The bellhousing and transmission case are also aluminum. Steel versions of the 377 were used for the long races for durability and the aluminum versions were used for shorter races.

Duntov’s “upgrades” before the 1963 Nassau race included a lot of venting to allow air to flow through the car, and included front and rear fender vents and vent holes between the taillights.

The spartan interior is trimmed with blue carpet and a teak wood steering wheel.

Note the 200-mph speedometer. When Delmo Johnson raced #004 at the Carrera de Costa race in Mexico, he was clocked at 205 mph!

The replica dash is fiberglass.

Unlike modern race cars with gauges for everything, the only extra gauges in the Grand Sport are for differential and engine oil temperature.

Under the rear deck is a 50-gallon fuel tank. Note the movie camera mounted to the rollbar. Tower has some of the films.

There’s no comparison between the Grand Sport’s interior and that of a C7.R’s.

Jim Hall installed the aircraft fuel filler cap, the same as those used on military planes.

The rear fender scoops are ducted directly to the rear brakes.

The Halibrand magnesium wheels are 15x8.5 on the rear and 15x7.5 on the front and shod with Firestone racing tires. These were considered “big” back in the day.

When Dave Erwin bought #005 from George Wintersteen the differential cooler had been removed. Tower put the cooler and scoop back on the car.

Tower said that the scoop provided a little extra downforce.

Look closely at the vents on the passenger side compared to the driver side. The passenger-side vents are trimmed out to clear the stacks on the Weber carbs because the engine is offset 2 inches to balance the car’s weight when the driver is in the car.

The aluminum work is quite extensive for the hood vents.

The bracket in the center is for the required spare tire. Note how the battery is offset to the right. To the left of the battery is one of the car’s three air jacks that Tower reinstalled on the car.

This metal plate is riveted to the driver-side front doorjamb. The “100005” obviously refers to Grand Sport #005. Tower has no idea what the “30837X” means. The Grand Sports might have been coded as “Experimentals.”

Tower was instrumental in coordinating the Grand Sport Reunion at the 2003 Amelia Island Concours d’Elegance event. It was the first time all five grand Sports had been seen together in public.

At the 1963 Nassau Speed Week, Dick Thompson drove #005 as part of the Mecom Racing Team of Grand Sports that savaged the Cobras.