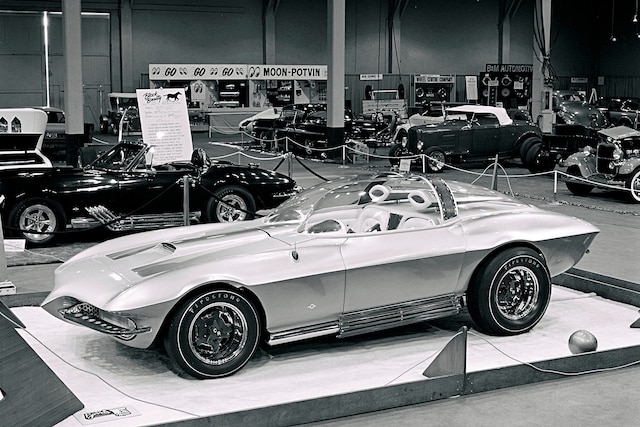 It took customizer Darryl Starbird six months to transform a 1964 Corvette into the wild, bubble-topped Cosma Ray. But for Bob Greenwade, who commissioned the car, those were six months well spent. The Cosma Ray would go on to nab multiple show awards, make TV appearances and be rendered as a plastic model kit.

Starbird “went all out, as usual,” noted Car Craft magazine’s feature story on the Corvette, which appeared in its July 1965 issue. This was actually the second time CC readers saw the car. It also appeared in coverage of the Winternationals Custom Auto Fair in the May 1965 issue, where these photos were taken, and where the car earned a Grand Sweepstakes Award for Best Custom.

Starbird handformed the custom body, with a sharply peaked nose (“gives the car tough appearance,” said CC) and quad headlights; an electric, front-hinged bubble top; radiused wheelwells; and “low lean lines” in the rear. Under the scooped hood (though not shown in either of the stories) was a 327 V-8 with an Isky 505 Magnum cam; Mickey Thompson 12.5:1 pistons, lifters, and rocker arms; and two Buick four-barrel carbs on an Edelbrock intake. “Car is drivable; handles well,” noted the magazine. The interior was upholstered in white Naugahyde and featured a custom steering wheel, cone-shaped headrests tucked under the bubble, and a Hurst shifter in the custom console.

Magazine timing can be a funny thing. Comparison of the car at the Winternationals to the feature story photos (which were shot by Starbird and so weren’t in the Petersen archive) indicates that while the feature ran two months after the show coverage, the feature photos were taken earlier. The car went through some changes on its way to the Winternationals. It had different wheels and tires, a new butterfly-like steering wheel, chrome covers on the side pipes, chromed split bumperettes front and rear, and a chrome band in the bubble top.

Those alterations, it turns out, were made by George Barris. In his book, Barris Customs of the 1960s, Barris said Greenwade brought the Cosma Ray to him “to do a little more customizing” after Starbird’s work was done. Until we learned that bit of the car’s history, we wondered why there was a Barris Customs badge visible on the front fender just above the side pipe. Vette