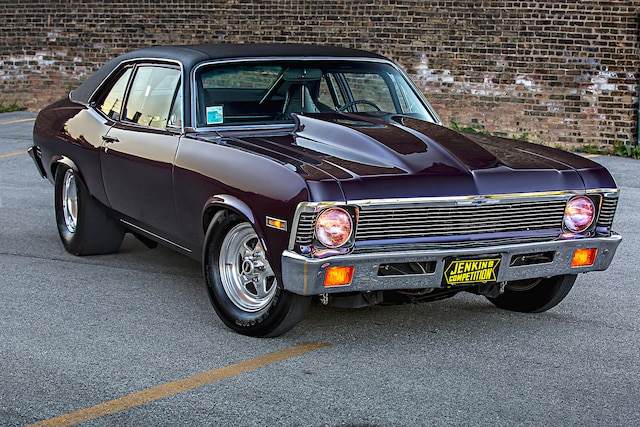 Phil Stoll told us a story we’ve listened to many times. About where he came from. “I guess this stuff’s in my blood. As a teen, my father worked for a high-performance shop and had a 1966 Nova race car. There were lots of cars? Yeah, he had more than 250 of them over the years. When I was one, my parents took me to the track … and the track seems to have stayed with me.

“I love cars, but I’m actually a motorcycle drag racer at heart. I started racing cars at 16 and a couple of years later went up on two wheels. I’m a world champion, too, in 1998. With all that said, cars are what I love most and enjoy and the people that are involved are my family.” There’s a YouTube video demonstration of him on the bike from a few years back; he runs a straight and true 7.05 at 205, the upshifts are quick, solid, and thump like a Lenco.

Phil stalked this car for a long while. “I always loved the Nova because that’s what my dad had.” It was about 80 percent done, and luckily to his taste. His vision was fairly simple: keeping it as stock looking as possible … with a little bit of muscle underneath. Phil and buddy Chris Walters began the work in 2004.

Though you could have fooled us, the Nova isn’t a hard-core racer. It doesn’t mind being on the street, either. He got aligned with Rick’s Race Craft for the chassiswork and problems so related. To foster public relations, he sat down to lunch a few times with Fast Times street car legend Chuck Samuel and the guys at AES Racing. Meanwhile, he would be trying to keep the budget in place, deciding against more than he really needed. He didn’t have an ego thing about how cool the equipment was or wasn’t; he made the basics work.

The chassis was one of those places. There’s really nothing to it at all. Rick’s notched the frame for tire clearance and while they were back there put up the mini-tubs. Phil decided to work the original leaf spring suspension with golden oldie Lakewood-like slapper bars, Koni 90/10 shock absorbers, and that’s it. To promote weight transfer to the slick rear tires, he put up another pair of 90/10s and Race Craft suspension limiters complete. Spindles are original. He upgraded to brakes that would fit beneath a 15-inch rim. In front, Wilwood 11-inch discs managed by two-piston calipers; Phil repeated the drill at the back end. Brake booster, steering column, and steering box are original.

When civilians hear tires squealing or, heaven forbid, see smoke churning, they tend to tighten up and get the willies, but they usually hang around to watch what happens because it’s not natural. That’s why Phil’s got those 10-wides and makes smoke pour off them like it was natural.

When it came to the motor, he got the good stuff. He got the benefit of centuries of experience from the storied high-performance mafia in the Chicago environs. He put the bullet together at his Stoll Racing shop with forged products from Callies, Manley, and CP. Chuck Samuel spec’d a camshaft for it but he won’t tell anyone the numbers. Just when you’d think of lightweight aluminum, Phil capped the block with oval port steel heads instead.

On the intake side, he wedged an Applied Nitrous 250-shot cross-plate beneath the big Dominator carburetor. At the other end of the trail, Hooker Super Comp headers have 2 1/4-inch primaries and the system is 3 1/2-inches interrupted slightly by DynoMax Ultra Flo sound deadeners. Without the power-adder, it makes 728 hp and 565 lb-ft. To harness the greasy grunt, Phil wanted a two-speed from DRC Transmissions, so the Powerglide is outfitted with a transbrake and a Coan 9-inch converter fixed with a stall speed amenable to the nitrous application.

After his exposure to and his mastery of the motorcycle, rolling on four wheels with all that metal surrounding him has got to seem tame to Phil, like he could almost relax while wheeling it around on the street. The very least, he feeds that snappy thirteen-and-a-half-to-one squeeze with race gas. There’s no inkling of high-speed cornering or of compliance with the autocross twist; the suspension is for going fast in a straight line. Hold the wheel and pedal it gently or hold the wheel and mat the pedal to the floorboard.

Slow or fast, the Nova’s low-slung stance and custom mix purple tend to make heads turn in its direction. Aside from the usual body prep, the rear wheel openings had been stretched to make it easier to get big tires on and off. Phil doesn’t know who painted it or when. The only thing left on it that isn’t steel is the Harwood ’glass 4-inch cowl hood. All other bits are original or N.O.S. Bumpers are not tucked, body seams are not down to the millimeter, yet the overall presentation is refreshing.

So is that it for flyin’ Phil? Nah. As a hired gun, he still races motorcycles at the dragstrip. He builds motors in his shop. When he thinks of the days down the road and what might be, he says “I’m an old-school, New Old Stock guy but I’m tempted. I’d love to put an LS turbo motor in it.”

What sticks in his head: He’ll never forget his surprise the first time he put nitrous to the 468 and put the car on the bumper. “Wow!”

This is tradition, wacky and wonderful old days that will never die. Street and strip’ll be here for a long time to come. CHP