This May Just be the Baddest Third-Gen Camaro Ever Built 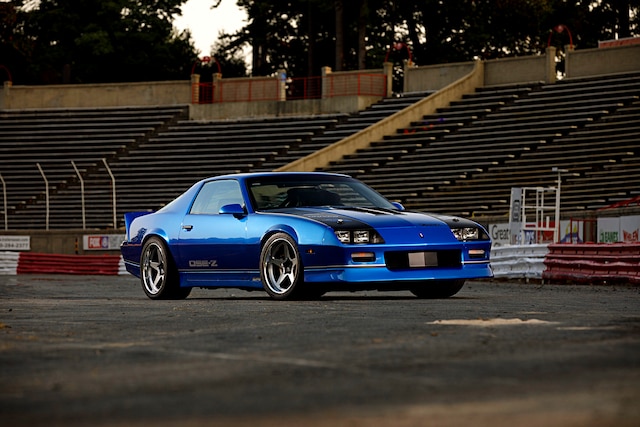 Editor Nick said to me straight out … “Kyle Tucker’s 1987 Camaro. This thing is the baddest Third-gen I’ve seen. The Third-gen Mafia used to come after me when I was on Camaro Performers magazine because I didn’t feature enough of them. Well, finally someone did one right, so those mullet-wearing ex-jocks from the ’80s now have a template to go by.” And then: “Wow … I sound a little bitter for a Wednesday.”

I remember the sentiment. From a metro area close to Manhattan and the millions of voices surrounding it, the Third-gen, and especially the tony IROC variant were mostly manned by a dude in a uniform: a wife-beater tee, gold chains settling in a nest of chest hair (if he was lucky), and maybe a “Mom” tat on his bicep. Where I was from, the mullet wasn’t common.

This is what Detroit Speed’s (DSE) president Kyle Tucker said about this car. “To be truthful, we built it to replace the first 1987 Camaro we built. It was crashed early on in our product development program for the Third-gen.”

Kyle didn’t put this one together by his lonesome; he’s got a company to run. Staff members clamored; Ryan Mathews, Matt Butts, and Andy Stapp did most of the build in the DSE race shop. Turns out Butts is a Third-gen die-hard and that he built a few of these along the way. Michael Neighbors and Austin Moore handled the body and paintwork inside and out and underneath. Though the metal might look untouched—it has a slew of subtle modifications—you’d need to compare it with a completely original car next to it to get the full effect. Stuff doesn’t shout; it whispers in your ears … and then tears them off your head.

Tucker got indoctrinated early, his father was a real car guy back in the day, and still is. He remembers being hunkered in the seat of the old man’s ’40 Ford coupe feeling him bang on a Muncie four-speed. “He took me to the dirt track Saturday nights. I loved the smell of alcohol, the hot brakes, tires, and gear oil. I was hooked somewhere between hot rods and racing for life at that point.”

He found the car locally. It was ugly, clapped out. It was red and it was cranking a V-6. The important things: the hardtop shell was intact and there wasn’t any rust worth mentioning on it. He gave $500, but recouped $600 on the parts he couldn’t use. The guys we mentioned blasted the shell, began installing the DSE product line, and building a rollcage. As per usual, all project car parts were mocked up and installed (less wiring) before moving the lump over to the body shop.

“During assembly,” said Kyle, “we wanted to have as many stock features as possible, so we found the original Camaro step and repeat fabric for the seats. Robert McCarter stitched it to the rear seats as well as the Cobra seats.” The lightweight Cobras are for track work. DSE quick-change seat tracks make it a snap to switch over to the street chairs.

To add to the IROC heritage, DSE’s social media and marketing team member Alex Stivaletti designed the DSE-Z font to replace the IROC-Z label at the bottom of the doors. He also did a Detroit Speed Equipped bubble decal to replace the IROC bubble decal on the rockers. “Customers who buy the speed kit get the decals, too,” said Kyle. “Pretty cool to a Third-gen dude, I think. We also have a T-shirt of the car. Very cool and a must-have for any mullet-minded owner worth their salt.”

Though the Camaro is a study in suspension and an education in power, the beauty of this conversion is that the extensive modifications maintain the original form. The hood is the only piece that doesn’t look normal. The factory bonnet hosts Trackspec louvers and a custom louver tray. It means hot air out, cool refreshing air in. The visual impact of that black on blue speaks sharply. Although the front bumper looks like nothing, it’s a heavily modified Ecklers fiberglass (buttressed with a crash bar structure), extended to fit flush with a custom laminated carbon splitter. Third-gen maven Matt Butts did all the custom fiberglass work, including the mildly flared fenders that abide 11-inch rims and 315/30 rollers without interference.

Mast Motorsports shakes up west Texas. They began with a 427 crate but had Callies build a crankshaft with a 3.625 stroke (stock is 4.00) to create a 388-inch displacement and a stinging 12:1 compression ratio. The Hooker BlackHeart extractors were built specifically to accommodate the DSE Third-gen LS engine swap and have since been mass-marketed. Kyle says the car sounds amazing and the destroked 427 has an 8,500-rpm shift point … and it’s hot rod loud!

“I think the best weekend with it was the Motor State Challenge in Michigan,” Kyle mused. “You run the Gingerman road course one day and then go to Tire Rack [in Indiana] and run at its test track set up for autocross. Stielow and I chased each other all day testing each other’s courage and best stunts we could think of while pushing the cars to the limit. The DSE-Z backed it up on the autocross the next day, running it up into the top of the field with the fast C5/C6 guys.”

Maybe some guys will look hard at this car, think they just got kicked in the head. CHP

How To Paint Your Car - Gun Control

We show you step-by-step how to paint your car on your own, making sure that you don't just have quality materials but a quality job done.

This 1987 Chevy Camaro was not only built for the street, but for the track as well. See what it has under the hood, with a full blown 357.

Check out this fully loaded 1987 IROC Camaro which features a 305 TPI mill, 440hp LS6, and much more! Check out other readers' rides along with vehicle specs and pictures at Camaro Performers Magazine.

Check how we install Edelbrock headers, a set of 3.73 gears and a Posi in our Chevy Camaro project car.