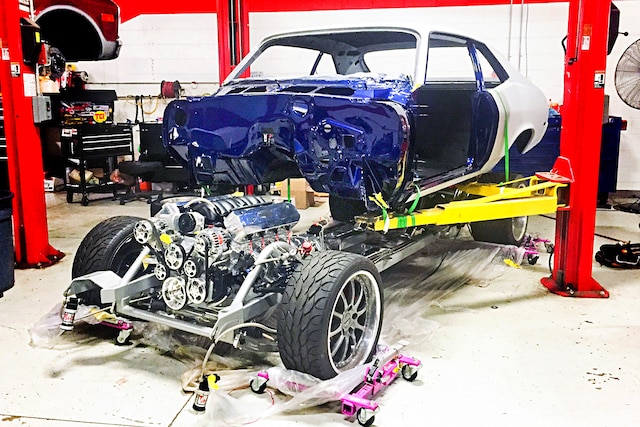 Randy Clark had a problem. You see, in high school he craved American muscle, but was stuck driving a VW Bug. Now, he had hopped it up and it was fun, but it just wasn’t what he wanted. Fast forward half a decade and Randy was finally able to pull the trigger on a sweet Chevy. Well, while the $600 straight-six–powered ’72 Nova ran, it certainly wasn’t up to Randy’s automotive vision, so the “sweet” part is subjective. He drove it like that for a bit and then gave away the six-banger in anticipation of a new driveline. Well, then the car sat.

Over time he scored a 350 small-block and got the car on the road, but still wasn’t making any sort of real progress. That changed in 2012 when he finally had the cash and time to do the Nova the right way. He recalls, “I started doing research on the different clips that I could put on it to improve the suspension. I then started thinking about a full chassis.” He also adds, “I came across the Schwartz Performance web page and I was interested in what they had to offer. I liked the look of their chassis and it seemed to fit what I was going for. I spent most of my time speaking with Dale Schwartz, Jeff’s son, and we put together the project. Originally I was just going to get the chassis, rearend, and front suspension from them.” Of course, he ended up getting much more, including a full-floating Moser rear and a complete LS drivetrain that included a TREMEC Magnum. In fact, he went to town upgrading the Schwartz chassis with all sorts of goodies, including RideTech triple-adjustable shocks and huge Baer binders.

The Nova, now mechanically sound, headed over to Bill Wood at Goodwood Customs to get sorted out in the sheetmetal department. New panels replaced the ones rusted out after years of snow and salt exposure. The trans tunnel was also enlarged to accommodate the new six-speed trans. The Nova then made its way to Gatton’s Garage in Virginia for the final bodywork and a luscious coating of PPG’s Midnight Rhapsody tri-coat paint from their Vibrance collection.

Right now Randy is finishing up the final touches and doing all of the assembly required to get this Nova back on the road. It’s even rolling on its new Forgeline ZX3P wheels (18x9 front and 18x12.5 rear). Look for a full feature on this thawed out and reborn Nova in a future issue of Super Chevy.