Randy Clark’s 1972 Nova is an exercise in determination, perseverance, and lots of cash 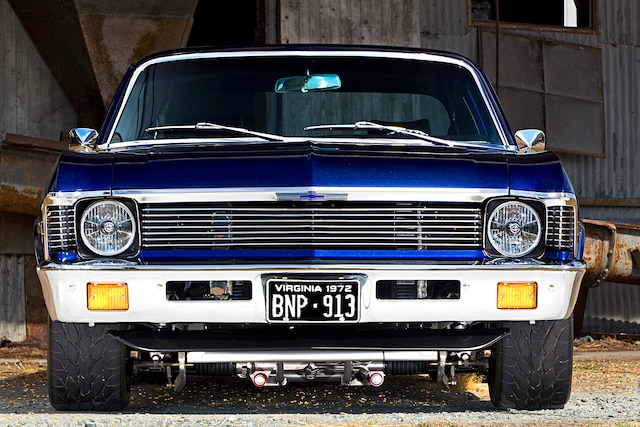 The story of Randy Clark and his 1972 Nova starts the same way as many others who at an early age develop an affinity for wrenching on cars. It’s a classic tale that spans a few decades and follows the all too familiar pattern where a youngster is really into cars but has limited funds to play with. The reality of that limited cash flow often dictates that you end up settling for something that you can afford, but not necessarily something that you really want. Randy recalls, “My high school car was a Volkswagen Bug that I hopped up. The four-cylinder was kind of nice, and I had a lot of fun with it, but I was destined to have a V-8.” By 1983, he was in his early 20s and was at a point that he felt comfortable in taking his automotive desires to the next level. That milestone came in the form of a ’72 Nova that he frequently saw parked at a local gas station. He notes, “I always liked the ’68-’72 Nova body, and at that point in my life I had a little bit of extra money, and I knew that I wanted a hot rod.”

The acquisition of the X-body set his finances back $600, and it did put him a notch up on the VW, but it was nowhere close to getting him into his coveted hot rod territory. Decked out in Gulf Green with a green interior, the Nova was sporting a 250ci inline six-cylinder engine mated to a two-speed Powerglide transmission. The paint was faded, but on the upside, the body was fairly solid, with rust in the usual Nova areas: the fenders and lower quarter-panels. “It drove fine, and I drove it for a few months,” he states. A friend was redoing a ’66 Chevy van at the time and was in need of an engine and transmission, so Randy pulled the drivetrain out of the car and gave it to him because he knew that he would eventually hot rod the Nova. There was just one minor issue with that plan—he didn’t have the time or the money to make it happen. Making the situation even more difficult, he became a homeowner. So that resulted in the Nova sitting for the next four years.

In 1987, his cousin tossed him a bone that would get the Nova project back on track. He gave Randy a small-block 350 and a Turbo 350 transmission. The only problem was that they were sitting in a truck, in the middle of a field, buried in mud. Undaunted by that obstacle, the engine and trans eventually made their way to the machine shop where both were given a full rebuild. As funds and time became available, the drivetrain came together. However, the body was still in need of attention. The rust issues with the fenders were sorted with a set of replacement pieces and the quarters were patched. The faded green paint gave way to a fresh coat of ’89 Ford Bright Blue.

The entire rebuild spanned almost two years and Randy kept the car in that configuration for the next nine years. But he points out, “I knew I was going to redo the car again at some point, and that occurred when I was still single. I had a girl in the car and I pulled a smoky burnout. I had three cops behind me when I did that and they gave me a ticket. At that point, I knew that if I kept driving the car I was going to go to jail, so I parked it and pulled the headers off so that I couldn’t drive it.” That sealed its fate as it sat under a car canopy, exposed to the elements, in his backyard for the next 15 years.

The next makeover kicked off in 2012 when he was in a much better place financially and was able to tackle his desires with fewer limitations. “I knew I wanted to take the car to the next level,” he recalls. “I started doing research on the different clips that I could put on to improve the suspension. I also looked at what I could do with the rear. I then started thinking about a full chassis.” He also adds, “I came across the Schwartz Performance web page and I was interested in what they had to offer. I liked the look of their chassis and it seemed to fit what I was going for. I spent most of my time speaking with Dale, Jeff’s son, and we put together the project. Originally I was just going to get the chassis, rearend, and front suspension from them.”

What Randy was eyeing up was their G-Machine chassis equipped with RideTech triple-adjustable coilover shocks; Baer 6P six-piston calipers and 14-inch, two-piece rotors; and a Moser full-floating 9-inch style housing with billet aluminum hubs, 31-spline Moser axleshafts, and a John’s Industries Truetrac 3.70:1 posi differential. Also on his wish list was their TREMEC T-56 Magnum six-speed that he was planning on using with his existing small-block because he was happy with its performance. That happiness soured in the end so he added a Schwartz Performance GM LS3 crate engine to the bill. Their LS3 boasts an upgraded camshaft, dual valvesprings, heavier rocker arm trunnions, and ARP bolts. It’s a combination that produces well in excess of 500 horses at the flywheel. In that list of parts, a set of Schwartz custom long-tube headers was also added.

Going with a new chassis and drivetrain was half the distance traveled. All that was needed was to drop the Nova body on it. However, its condition from sitting outside all those years meant that it, too, was in need of some upgrades. For that part of the rebuild Randy took matters into his own hands and tore the car down, mounted it on a rotisserie, and had it mediablasted. It was then sent to Bill Wood at Goodwood Customs in Sterling, Virginia, for some fabrication work. While there, a new floor and trunk pan were installed. The floor was altered to accommodate the TREMEC, while the rear pan was modified to accept the mini-tubs needed for the larger rubber he was planning on installing. The firewall was smoothed and new sheetmetal from AMD and Goodmark installed. When Bill was done, the only panel that was retained was the roof. That leg of the journey spanned 18 months.

From there, the car was assembled and transported to Gatton’s Garage in Montross, Virginia, for the rest of the bodywork and paint. Shop owner, Brent Gatton spent the next 10 months massaging all the new metal until he was ready to lay down the paint. When that choice had to be made, Randy had many flavors to pick from but decided that the Nova would again get painted in blue. After looking at many shades, he settled on PPG’s Midnight Rhapsody tri-coat paint from their Vibrance Collection. With the body wearing its new paint, the Nova was sent back to Randy. With this rebuild there was no longer any penny pinching, so all-new trim was sourced from the Classic Industries catalog. Along with all-new brightwork, he also installed new glass, a gas tank, and completely rewired the car in preparation for the final build stage: the interior.

That last hurdle was entrusted to Tommy Perkins at Seams Ridiculous Upholstery in Montross. Like the rest of the car, most of the interior hardware would be new. The foundation that Tommy started with was a pair of Cerullo GT Sport seats up front and a set of ’05 Pontiac GTO seats for the rear. They were covered in black vinyl, and the rest of the interior was built around them. The center console, along with all the panels were custom made and wrapped in black vinyl. Instrumentation was updated with a full complement of AutoMeter gauges, an ididit steering column with a CPP billet steering wheel, and a Pioneer sound system. Stylistically, the interior theme also carried over to the trunk area. With the car nearly finished, Randy took it back to his garage to finish the detail work. The custom 3-inch stainless exhaust and SpinTech mufflers were put in place and a set of Forgeline ZX3P wheels for all four corners chosen. At the front they measure 18x9 and are wrapped in 255/35ZR18 BFG g-Force T/A tires, while the rear measure 18x12.5 and wear 335/30ZR18s.

With the car finally at a point where he was satisfied, the only thing left was to log some miles on it. While it has been built to show car standards, make no mistake, it is regularly driven and enjoyed. As with any build, the question that lingers after it’s been completed is if there is anything that could have been done differently. The only thing that Randy can think of that he would consider is the addition of a blower. The Nova has come a long way from its humble origins. It sat dormant for many years, which is a fate that befalls many cars with well-intentioned owners who never end up doing anything with their cars. Randy gets huge props for sticking with it and building one killer Nova.