The L88 mystique. Why were these rare Corvettes so significant? 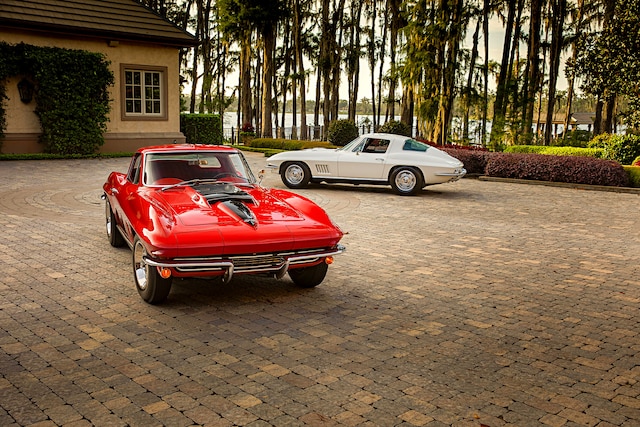 Our two stunning 1967 L88 feature cars are owned by the Rare Wheels Collection and Roger’s Corvette Center, near Orlando, Florida, area. To understand the significance of these L88s, let’s explore Corvette’s performance development since 1960. Today’s Corvettes are packed with high-tech electronic features that push comfort and performance levels to an all-time high. The ZR1 is packing 755 horsepower. To put that into perspective, the 1997 Corvette engine was rated at 345 hp! This explosive horsepower growth is similar to the one in the ’60s during the muscle car horsepower wars.

The top 1960 Corvette engine was a 283-cubic-inch, fuel-injected small-block rated at 290 hp (option code 579D). In 1969, the top engine was the 427-inch big-block rated at 435 hp. These horsepower increases were accomplished without the aid of electronic technology. Big cubic inches, big cams, high compression and large carburetors were the keys to improving performance. During the horsepower wars, the Corvette team was working hard to keep up with the competition, mainly the Ford Cobras. This lightweight Corvette competitor (2,000 pounds) was stuffed with a 260-inch small-block Ford engine that was rated at 335 hp. It was tough to beat it on the sports car circuits. In comparison, the 1963 Sting Ray weighed 3,015 pounds. Its weight and the 327-inch/360hp engine (option L84) wasn’t competitive against the Cobras. Corvette Chief Engineer Zora Arkus-Duntov knew the Sting Ray was outclassed, but due to GM’s corporate racing ban, his hands were tied.

Oddly, it was a NASCAR racing program that provided Zora with a possible answer to his Cobra problem. Chevrolet General Manager Bunkie Knudsen directed the Chevrolet Engine Group to release their “mystery” V-8 to select NASCAR race teams; it was known as the Mark II. Knudsen wanted to make Chevrolet competitive and he authorized the release of some of these engines to select racing teams. One of them was Mickey Thompson in Long Beach, California. He stuffed two of these engines into Sting Ray coupes and finished third at the Daytona International Speedway in January 1963. Duntov was so impressed that he formed a team of three design engineers: Fred Frincke, Cal Wade and Denny Davis to convert the Mark II into a street engine. Davis did the camshaft design and power development, Frincke did the intake, exhaust manifolds, cylinder heads and block and Wade did carburetor flow design, pistons and oil pumps. The completed engine was named the Mark IV and engine production began in January 1965. In April, it was available for Corvettes, Chevrolets and Chevelles. Chevrolet limited their intermediate models to 400 cubic inches, so the Corvette Mark IV was produced with 4.09x3.79-inch bore/stroke, or 396 inches. The strong compact engine weighed 680 pounds with all of its accessories and was rated at 425 hp. It was a superb performance engine for Corvette; it also became the foundation for the RPO L88 engine option.

The birth of the L88 began in early 1965, after the 396 engine went into production. Due to GM’s anti-racing policy, engine development was done in secret by the Frincke, Wade and Davis team. Their goal was to develop a production engine option that would devastate the competition. With Zora’s knowledge and blessing, they had the secret engine ready for testing in October 1965. According to the late Fred Frincke (whom this author interviewed in 1993) the L88 block was the same as other 427s with some internal differences. It used a forged steel cross-drilled crankshaft and secured with four-bolt main bearings. The connecting rods were shot-peened and fastened with 7/16-inch bolts. The piston pin floated in the rod. Cal Wade worked out a special tin/lead coating on the rod surface so it could float instead of being pressed on. Wade designed this system to reduce friction and make the rod more serviceable. The engine was topped with an 850-cfm double-pumper Holley carburetor with an engine intake at the base of the windshield.

One of the myths about the L88 concerns its special heads. Frincke remembered that his team did not tool up special heads. What was different was its aluminum construction, which saved about 70 pounds. Fred said when the engine was equipped with Thomas headers, output was between 550-570 horsepower. Duntov offered this engine to Roger Penske for the 1966 24 Hours of Daytona. Penske had just retired as a race driver to become a race team owner. Frincke called it the “Penske service kit” for evaluation purposes. Duntov filed homologation papers for the “L88 Service Kit.” He received approval from the SCCA and FIA in late 1965 to race the engine in 1966.

Duntov’s first L88 Service Kit was installed into a Rally Red 1966 Corvette coupe. It was entered by Roger Penske Chevrolet and sponsored by the Sun Oil Company. Dick Guldstrand picked the red rocket up at the St. Louis plant and drove it to Penske’s dealership near Philadelphia. At Daytona, Penske was team manager and Guldstrand, George Wintersteen, and Ben Moore drove the Corvette.

Gib Hufsteader (Design Release Engineer for Duntov) served as a crewmember and factory consultant. Gib recalls, “The car ran like a train and we had a comfortable lead until the Corvette slammed into a slow moving car in the middle of the night. The crew made temporary repairs and taped flashlights to the remaining fenders and finished 12th overall and 1st in their class.” The Corvette was repaired, repainted Sunoco blue and raced at Sebring, driven by Wintersteen and Moore. They finished 9th overall and 1st in GT. After Sebring, Penske sold the car and focused on Trans-Am and Indy racing and the rest is history. Kevin Mackay, owner of Corvette Repair, is the proud owner of Penske’s first race car. Zora was so pleased with this performance that he decided to make the RPO L88 a production option for 1967. When released, Chevrolet pulled no punches as to its purpose. “This L88 option is designed to be used by qualified racing groups. It can only be ordered with the following options: J66 transistor ignition system, M22 four-speed transmission, G80 Positraction rear axle, F41 suspension, J56 heavy duty brakes and C46 heater/radio delete. Because the L88 is an off-road engine, no provision has been made for anti-pollution control. For those states requiring smog-controlling devices, it cannot be registered for street use in a passenger carrying vehicle.”

Race driver Tony DeLorenzo took delivery of the first of 20 production L88s (VIN#194377S10009097) at Hanley Dawson Chevrolet in Detroit in January 1967. Tony and his team race-prepped their Tuxedo Black and Marina Blue convertible. He entered the Central Division Sports Car Club of America (SCCA) A Production racing class and won the L88’s first race at Wilmot Hills, Wisconsin. Tony finished a close second in the national SCCA championship race at Daytona behind a 427 Cobra. DeLorenzo went on to form the Owens-Corning Corvette racing team. Jerry Thompson and Tony DeLorenzo won multiple championships driving their L88s. In the summer of 1967, drivers Guldstrand/Don Yenko/Bob Bondurant raced a Dana Chevrolet-sponsored L88 at the 24 Hours of Le Mans. It was clocked at 171.5 mph on the Mulsanne Straight and led GT until its engine expired at the 13-hour mark. Another L88 owned by a private team raced their 1967 L88 coupe at Bonneville Salt Flats. It set a new Touring Car record at 192.879 mph and proved just how fast the L88 was.

The Rally Red L88 coupe in our feature is owned by the Rare Wheels Collection near Orlando, Florida. It was built on April 12, 1967, and was the sixth L88 built (VIN#194377S10015791). The original owner purchased it from Mike Savoy Chevrolet in Birmingham, Michigan. The Rare Wheels Collection has amassed an impressive variety of exotic cars from across the pond. However, their L88 coupe is a perfect fit for this collection. Curator Tom Hill told Vette that the Naber Brothers in Houston spent one year restoring this rare Corvette in 2001. It only has 11,900 miles on its clock, but does not have its original engine. It was replaced with a date-code correct 1967 L88 block that has been NCRS certified. It has only one option: the A85 (shoulder belts, $26.35). It was only raced at local dragstrips in the Detroit area. Since its restoration it has received many awards, including a NCRS Top Flight and the prestigious Duntov Mark of Excellence Award in Galveston, Texas. It was a Special Collection participant at Bloomington Gold in 2001, a 50th Anniversary participant in 2003 and was at the Duntov display at Hershey in 2003 and 2007. It was purchased by the Rare Wheels Collection at the Barrett-Jackson Auction in January 2014 for a record setting $3.85 million dollars. This Corvette is a perfect representation of how an original L88 looked when it left the St. Louis Corvette Assembly plant.

Our second feature L88 is owned by Roger Judski. He purchased his unrestored 21,739-mile Ermine White 1967 coupe in April 1987. It was located in the New England area and it had been repainted yellow by the owner’s girlfriend. She wanted to surprise him while he was out of town on a business trip. Its only racing activity was at local dragstrips. When Roger purchased the car, its L88 engine and M22 transmission were not in the car. After some good detective work, Roger located the original engine and transmission. Before he installed them they were rebuilt utilizing the original mechanical components, which were in excellent condition. Everything was reassembled and installed into his Corvette. Both have been untouched since that rebuild many years ago. This Corvette was the eighth (VIN#194377S10017055) of 20 L88s built in 1967. A total of 22,940 Corvettes were produced at the St. Louis plant that year. So Roger’s car was assembled late in the production run. With the exception of fresh Ermine White lacquer paint that was applied in 1988, this Corvette is original and unrestored. This rare coupe is on permanent display at Roger’s Corvette Center in Orlando, Florida, for everyone to see and enjoy.

Both were delivered from the factory with a base price of $4,388.75 and its L88 mandatory options ($1,722). This brought the total price without shipping and taxes to $6,110.90. We congratulate these two owners for preserving these rare historic L88 Corvettes. Vette