He calls it the Sh*tbox Nova, but we think this Chevy guy is way too hard on himself 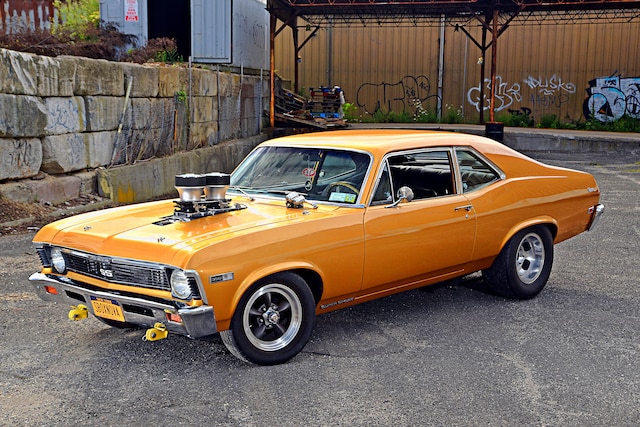 Joe Stemmler wasn’t really like all the other guys his age growing up in Oceanside, New York. You see, when the Long Island native turned legal driving age in 2007, he decided not to do what the other local kids were doing. Instead of getting a docile hand-me-down from mom and dad or turning to a cheesy toy-tuner for his first ride, he did a 180 turn on them and hunted down a classic ride to turn into his first streetable daily driver.

Joe was always into all things mechanical and he turned his passion on full-blast and let it guide the way. As a young hot rodder in training, he had honed his craft on anything he could get his hands on; vintage bikes were first and soon he weaved a path toward building cars. Typical suburban commando style tactics were involved here folks; ripping out powertrains in the street, installing “new” transmissions in the rain, and driving just about anywhere for a deal on a part were the only ways to get it done in his neighborhood.

Nova the Short Term
So in May 2012, Joe got serious about his horsepower addiction and decided to do something major about it. He asked around locally to see if anyone had a quality driver Nova for sale. Luckily for him, a buddy came through and got Joe the number for a guy with a Chevy X-body up for grabs. They lined up a meeting and a few of Joe’s buds went along for the ride to check out the car. It was pretty much what they expected: a ’68 in decent shape (for the Northeast), sporting a rather timid ’80’s era 350, and backed by a TH350 transmission.

The car also came with updated buckets that were installed in a basically stock appearing interior. The paint was faded and had its share of typical New York rust. It was soon apparent that this car would definitely need a stint in the body shop to remove all the crust that had formed. But there was nothing major to deter Joe from scoring his own compact Chevy. A deal was then struck; the Nova was coming home with Joe.

The plan was to drive it the way it was for the time being. And that’s what Joe did; for about a month. It didn’t take long before the new owner was elbows deep in the car, as the powertrain just wasn’t cutting it for the young Chevy aficionado. Out came the meek motor, and in went an aluminum-headed small-block, now coaxed with a dose of cam and a better breathing intake. Behind the powerplant, an M21 was installed to punch this Chevy through the gears. Out back, a spooled 12-bolt stuffed with 3.73 gears pushed the power to the pavement. OK, now Joe was instantly having fun.

Nova and Nova Again
However, the good times were short lived. Hurricane Sandy blitzed the Eastern Seaboard in the fall of 2012, taking everything that was in its path. Living near the water, the Nova was unfortunately not left unscathed; it tasted some of the nasty local salt water due to flooding in the area. It turned out that everything had to come back apart. Now back at square one, Joe decided to regroup and rebuild the Nova the way he knew he could.

Soon after the storm, Joe, along with girlfriend Kayla, brought the Nova into the garage and started stripping the car down to its core for its rebirth. Panel by panel, they pulled the Nova apart. Next to come off were the nose and the trunk lid, along with a full gut of the interior. However, they kept it “driveable” while doing the dirty work.

Joe eventually got the Nova to his Uncle Dave’s body shop, Truck and Autoworks in Island Park, New York, where it was then completely stripped to bare metal. It’s at that point when Joe noticed “a little more filler in the body” than he had first thought. Yeah, that kind of surprise happens hourly here in the Northeast. Needless to say, there was more work to be done on the panels than Joe had hoped. Mucho sheetmetal was needed, and Joe ended up getting new lower quarters, taillight panel, trunk pan, lower fenders, cowl bottoms, and door bottoms and corners, as well as performing miscellaneous repairs around the windshield and back glass.

While it was at the body shop, Joe and good friend Pete Desiderio pulled the drivetrain out of the Nova and rebuilt the suspension. Here, Joe and Pete installed Calvert Racing’s Split-Mono-Leaf rear leaf springs, with CalTracs bars and 50/50 shocks out back. Low-friction ball joints, solid bushings, Moroso Trick Springs, and a pair of Calvert 90/10 shocks up front finished off the rodder’s recipe they were cooking. A set of tow tabs were installed for good measure. Then it was back to the bodywork. Once the skin was ready for its new paint, Juan Alvarez at Truck and Autoworks sprayed on its golden hue in a Metalux basecoat/clearcoat finish.

Blown Nova!
Deep down inside, Joe always wanted a supercharged car. “The noise and look of a Roots blower is simply just in-your-face cool,” states the owner. Yeah, we can’t blame him one bit here. So Joe felt there was no better time to make his dream become a reality. He talked to Dave Kogan of Kogan Motorsports in Island Park, New York, about his needs. Dave delivered. The twosome came up with a blown, pump gas 383 stroker (4.040 bore x 3.750 stroke) that is totally streetable while still making over 500 hp at the rear wheels. The mill is filled with forged Scat guts along with Wiseco pistons and a Comp valvetrain. The engine itself is nothing crazy, but it’s a great performer for the sum of its parts. Backing up the mill is a TREMEC TKO 600 spinning back to a 12-bolt with 4.11 gears, Moser axles, and spool to get it all to the ground.

The compression has been kept low, at a nice boost-friendly 8.5:1 and an 871 Dyers blower supplying 10 psi of boost supplies the push. For fuel supply, a FAST XFI Sportsman Roots Blower Dual Quad setup was sourced, and Joe couldn’t be happier. “The car will start in single-digit temps in the middle of the winter and idle right away,” says Joe.

Nova and Out!
Joe never wasted time on the car. While the engine was getting its upgrade, the Nova was getting its interior redone. “I cleaned up a lot of the original pieces that were in great shape,” says Joe. A pair of used ’69 Camaro bucket seats were sourced for the Nova and then covered with ’68 skins. They were a perfect fit in the cockpit as Joe wanted to keep an old-school feel. The backseat was then re-covered, the carpet and package shelf replaced, and, finally, Joe added a set of AutoMeter gauges to keep track of the vitals.

The 12-bolt rear was narrowed and braced. Next, the springs and shocks moved inboard to fit the big meats he’s installed. A Moser spool and axles were sourced to finish out the parts list. The rear was assembled by Crazy Don’s Chassis Works in Island Park, New York. Out back, 15x10 Ansen Sprints shod in Mickey Thompson rubber grips the road and rockets this ship down the hardtop in classic old-school fashion. Up front, 15x4 American Racing Torq-Thrusts skinned in 195/65R15 BFGoodrich radials help keep this ride pointed in the right direction.

Joe and Pete kept on the car, putting in a solid week of afternoon hours. It came together quick, as the twosome reinstalled all the trim, bumpers, fuel system and interior, and got it running in that time frame. After the thrash, the following week they drove it to Ocean City, Maryland, for the 2015 Spring Show. Joe was overcome with a sense of accomplishment, knowing he had torn the car down and rebuilt it just the way he wanted it, all in a short period of time.

Like any project, it’s never totally finished. “Everyone knows what I mean when I say the car will never be done; because it’s never really done,” says Joe. He christened the car Sh*tbox Nova, just because it was a constantly evolving, low-budget build. He’s a little hard on himself, as this ride has more than enough going for it. Just recently, Joe’s put in a TREMEC TKO 600 transmission. “Had to cut some of the trans tunnel to help it fit,” he says. Also, there was an installation of a set of DSE mini-tubs, done by the owner and his friend John Wolkiewicz.