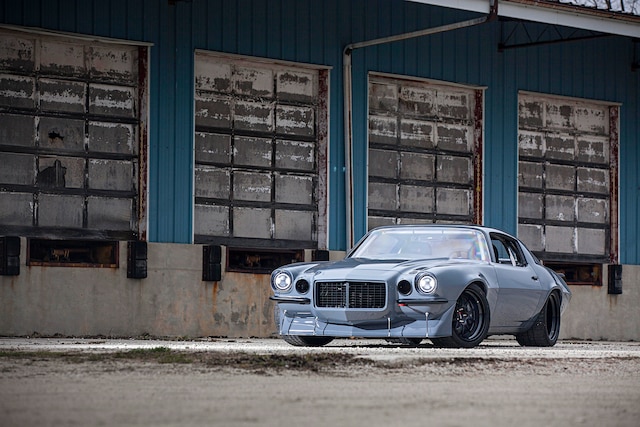 To the cast at RideTech, the Track 1 Camaro is more than fun-to-thrash Detroit Iron. That’s just the car part. The real inference is that it’s a research and development tool that trades that old iron for more contemporary concessions. If you look at steel as analog then maybe traditional fiberglass and that fierce up-and-comer carbon fiber could be considered digital and you are aware of the considerable difference between them.

Built as a counterpart to the conservative bolt-together 48 Hour Camaro, by comparison Track 1 veers violently off-register. It says: What do you want from this? What do you want to do? Well, then, just go ahead and get it done. We ain’t trying to be hiding back here. Where the 48 car was sourced and built mainly in the RideTech stockade, the Track’s reaper constitution rose from Lubbock, Texas; Lawrenceville, Illinois; and Baltimore, Ohio; along with some other exotic addresses.

Bret Voelkel, life-long car enthusiast, made this statement about this Camaro: “To push the boundaries of Pro Touring using RideTech’s Track 1 Suspension and our electronically adaptive Instinctive shock absorbers. The technology is wrapped in as much carbon-fiber bodywork as is available. Despite high-tech everything, the Track 1 Camaro maintains its original subframe (but all seams are welded and it is clearanced to accept the LS7 dry-sump equipment).”

A while back, there was a progenitor; RideTech’s Goodguys-winning autocross 48 Hour Corvette went on the trail fixed with the Track 1 suspension and the adaptive dampers. Corvettes are lightweight and have a relatively short wheelbase, whereas a Camaro is inherently heavier and with a longer wheelbase. As per Bret: “The Track 1 version is a more challenging platform and presents opportunity to develop and test extreme performance parts that are legal for street use.”

Bret didn’t exactly get a completed car when he bought it from an enthusiast who thinks the way he does. He says it was a flawless piece that had spent its life in the liberal climate of California. It had been in pieces for years, a project that never got off the ground. The steel body would stay intact; the floors were impeccable. RideTech installed “Chicane Mounts” that accept the upper coilover attachment points. The rear subframe hosts the bolt-on four-link and the unicradle bulkhead brace described earlier in the 48 Hour story.

The drive axle? Back there Bret’s running MillerBuilt’s bolt-on full-floater solution, where the axles engage the floaters that are based on C6 Corvette unit-bearing hubs. The floater kit handles the heavy side-loads inherent in autocross competition and road race punishment. By fully supporting the axle bearings, full floaters eliminate brake pad knockback while extending the life of the axle bearing. As RideTech pushes their Pro Touring cars to the snapping point, this feature becomes increasingly important. That formula includes 14-inch Wilwood discs at all corners reacting to the pressure of six-piston calipers.

On the shiny side, all the replacement pieces—doors, hood, decklid, and fenders—are carbon-fiber replicas from various sources. It was Smitty’s Custom Automotive in Tiffin, Ohio, that flared the front wheel arches, finished the bodywork, and painstakingly minimized the gaps between those air-weight composites. Bret: “Smitty’s finished everything to show-quality street standards. If we were just building a race car, we might not have tried so hard, but fit and finish matters with a true hot rod.”

Who would have thought that plain old putty could be intimidating as a sawed-off shotgun? Chris Smith and Tim Kinn stirred up some PPG Ford Stealth Gray and put a drop or two of tint in it. That was fine, but the contrast of those polarizing atomic orange wheels seems to light a booster rocket and really blast the thing off.

Since the Track 1 is about being all-out, the propeller had to be substantial, not an all-out assassin but one with enough moxie to make the wolves swallow twice. For this, the action shifted south to Texas and the Scoggin-Dickey (SDPC) Raceshop in Lubbock. SDPC based the engine on a Concept Performance LSR aluminum cylinder case because it’s stronger and more ventilated inside than the production LS7 block, is preceded by the OE dry-sump oiling system, and arrives with Pro-Gram Engineering 1045 billet steel main bearing caps, too. They pulled 665 horsepower at 5,900 rpm easily out of it, which is another way of saying they barely bumped the block. The rotating assembly is a mix of Callies 4340 forgings and Wiseco slugs.

Specs for the SDPC hydraulic roller camshaft aren’t open for discussion. Neither is the compression ratio. We do know that the Brodix BR 7 cylinder heads were CNC-ported by Frankenstein Engine Dynamics (Weatherford, Texas), fitted with oversized titanium valves and T&D adjustable rocker arms. The engine gets protein via a zoomy MSD intake manifold and a Nick Williams throttle body. Hooker mufflers intersect the 3-inch exhaust system.

Coolest thing that ever happened in Track 1’s young life so far: Racing Robby Unser in the Speedway Motors Camaro at Goodguys. A slightly prejudiced Bret confides: “The car does everything well, but since it serves as a research and development platform, we continuously apply subtle design changes, then offer the revisions to the public as part of the Track 1 program.” He is especially grateful to another handful of premier road dogs: Smitty’s Custom Automotive, Trent’s Trick Upholstery, Mike Ballard from Custom Image Corvettes, and Michael Hamrick at Wilwood.

Even Editor Nick put his two cents in: “I actually got to drive the yellow one earlier this year and it was pretty damn cool for what it is. The gray one I didn’t drive, but I wanna.” Wonder, if there’s still time? CHP