Out of Dan’s Shadow 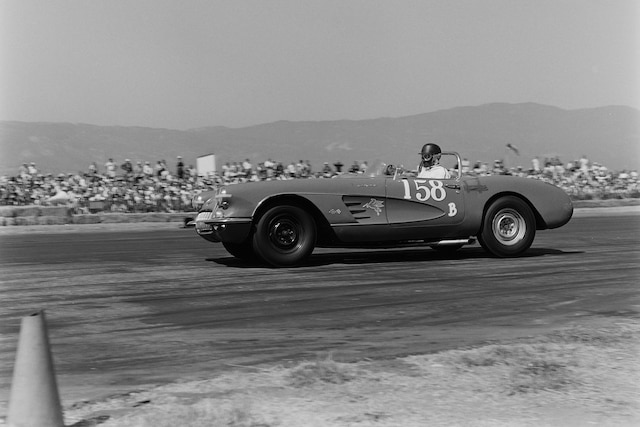 Almost every piece of research you can find about Ronald “Skip” Hudson describes him the same way: some version of “friend of Dan Gurney.” It’s understandable. While Gurney became an internationally famous driver, team owner and car builder, Hudson’s racing career, successful as it was, came primarily from West Coast sports car events.

Gurney and Hudson were close. During Gurney’s first trip to Bonneville in 1950, he earned an SCTA timing tag for going 130 and change driving Hudson’s Model A roadster. When Gurney was part of the team that first drove Shelby Cobras in international competition, at the Daytona International in 1963, Hudson was in another of Shelby’s cars. He finished second in class, while Gurney was a DNF. Hudson started racing sports cars in the mid-1950s. His earliest rides were mostly in Porsches, though there were Alfa Romeos and Lancias in the mix, too. This 1958 Corvette, sponsored by C.S. Mead Chevrolet, was the first of several Vettes he raced in the late 1950s and early 1960s.

Petersen Publishing photographer Eric Rickman was on assignment for Motor Trend to cover the California Sports Car Club (better known as Cal Club) race at Santa Barbara over Labor Day weekend in 1958. There he caught Hudson on his way to victory in the B/Production class. That day Hudson beat another young driver in a Corvette, a guy named Bob Bondurant. A month later, Hudson again won the B/P class in the Mead Corvette, this time at the U.S. Grand Prix of Sports Cars at Riverside.

Hudson’s other notable class win in a Corvette came in 1964, when he and co-driver Jerry Grant drove the purple Nickey Chevrolet Z06 to First in the GT 5000-Unlimited class (and 16th overall) at the 12 Hours of Sebring.

Soon after, Hudson took the wheel of another Nickey race car, the Chevy-powered Cooper-Monaco that Nickey had acquired from Dan (Hoss Cartwright) Blocker. Almost immediately Hudson won in the car, at the USRRC Riverside race in April 1964. But he had very mixed results with it in the races that would follow.

While most of Hudson’s racing was done in sports cars, he spent a few years in the 1960s racing Stock Cars at Riverside. His best finish was an eighth overall at the 1964 Motor Trend 500, which was won by, you guessed it, Dan Gurney. Vette

1958 C1 Corvette with More than a Few Surprises