Bolts, nuts, a drill bit, and a little sweat is all you’ll need. No welding required. 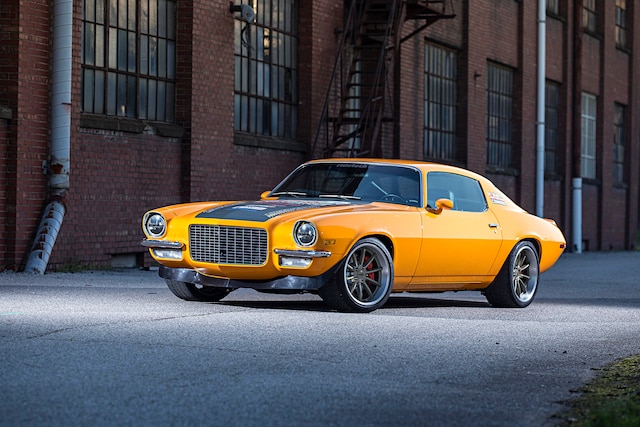 I saw the early Mustang one afternoon on an early Power Tour (1997, I’m pretty sure). That was when it was still a fairly intimate gathering and before there were way too many cars suffocating that trail. There were legs sticking out from the rear bumper (there’d been a small electrical fire that Rob Kinnan was able to easily extinguish with a beer he happened to be holding—further details never mind). Those substantial limbs belonged to Bret Voelkel and it was a bit before anybody knew anything about RideTech, probably not even Bret Voelkel.

Twenty years after that broiling tarmac story and dozens of pertinent products and integrated systems later, Voelkel was in a position, free to go nuts, doing stuff the rest of us can only imagine, only closing our eyes and ruminating happily. The RideTech 1970 Camaro and another one similar became the basis for an ambitious experiment. Two builds. One known as the 48 Hour Camaro … the other, the Track 1 Camaro. Yeah, sure, they’d be fun to whip on and try like hell to break; the thought amused Bret, but ostensibly research and development were his practical aspirations. Substance sayin’ something, rather than a flaky vanity plate caption sayin’ something. The 48 Hour represents a basis for initial changes to engine, suspension, and the rolling stuff. It was designed as a magnet for components that required nothing more than holes and fasteners, OK, maybe a church key, but not one second of welding required for any of it. As a bolt-on car, it maintains a conservative place that the more complicated Track 1 rooter surpasses in all categories.

Bret thought that the naked fastener aspect was important, would be encouraging, and a place for the less experienced to learn about now and then what comes later. In fact, the car was converted in 48 hours for all to see, broken up into eight six-hour shifts, under a canopy in a parking lot. Bret: “This agenda was very tight. No matter how well you plan one of these chingos in advance, parts get chased at the last minute. And you know it’s never easy to build a car in a parking lot.”

It was done to prove something—the merits of a 100-percent bolt-on build, no trickery involved. The components include a new rear subframe-style named “unicradle.” It revolves around a four-link system. The stock but rewelded front subframe incorporates the RideTech TruTurn front suspension system, which includes a taller spindle to improve the camber gain and a raised spindle pin that lowers the car 2 inches free and easy. The steering arms are designed to correct bumpsteer and to accommodate up to a 10-inch-wide wheel with a 5.75-inch backspacing. The drag link bracket bolts onto the OE drag link to relocate the inner tie-rod end to minimize bumpsteer. Finally, the tie-rod assemblies integrate with the new steering arms and centerlink. Maybe the subtext here is “you can keep your original subframe.”

To begin with, the coupe Bret picked was a chicken. It was a gem. “I found it for sale at the NSRA Street Rod Nationals. It looked nice enough with a blue paintjob and your typical 350/350 drivetrain combination … and it has the cleanest original floorpan that I have ever seen, original primer still intact.” To this day, the 48 Hour maintains an all-steel body and components. Since the sheetmetal was exemplary, the shell prep was handled by RideTech’s R&D fleet-only own body shop. The floor had to be ventilated a bit behind the rear seat to make room for the protruding suspension upper links, but that was it.

Besides that, they inserted a few aftermarket props: Anzo USA headlights and Ringbrothers hood hinges. All trim is original. Kurt Blackglove and Dennis Niehaus did the painting dance, wafting the shell with PPG Velocity Orange. But it would be up in Nebraska where Tracy Weaver at his Recovery Room Hot Rod Interiors would finish the gut work. Tracy smoothed out the leather surfaces for the Recaros and laid some more cowhide on the door panels, as well. Since the Camaro was surely a road-going conveyance, Bret would be bringing a competent sound system and refrigerated air along with him.

The beautification process of the 48 Hour Camaro was countered by a few pertinent changes to the mechanicals. The TruTurn steering configuration ensures that 275-series tires on 10-inch-wide wheels would always fit without any body or chassis modification. Because the shape of the unicradle and four-link suspension is compact and more room was available, mini-tubs were unnecessary. Down there in its belly, Bowler Performance fixed the big 4L75E with a ProTorque billet converter and Sonnax gear ratio change that enable engine braking, high-rpm shifting capability, and the ability to hold Low gear with full pressure.

What fun, right? Bret says the most memorable experience had nothing to do with winning an award or special mention. The FM3 Marketing road trip Cars N Cones Charity Tour that begins in Indiana and ends in North Carolina, whizzes through six states with an autocross event every day. Bret: “The event benefitted a fellow enthusiast who is battling CCL, a form of bone leukemia. The camaraderie on Cars N Cones is tough to beat.” CHP