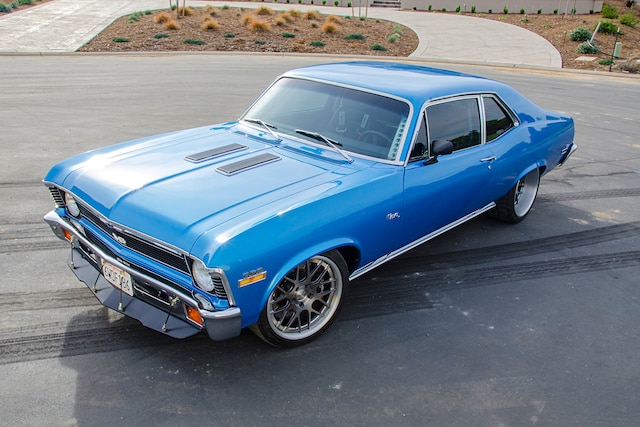 Anybody who’s ever tried to find a really special Chevy knows firsthand that life is what happens while you’re busy making other plans. You start out looking for one type of car and you end up with a novel encounter. Or in Marc Tavalero’s case, a Nova encounter.

Initially, he had a Corvette in mind but was diverted by a high-caliber ’71 Nova gathering dust in the corner of a shop. At first glance it didn’t seem all that unusual, but the closer he got the better it looked. What caught his eye was the LQ9 block bumped up from a factory output of 345 horses at the wheels to 490. And it boasted an array of other weapons-grade mods.

What led him to this Nova? As a longtime Chevy collector, he’s run into a number of surprises over the years while pursuing his Bowtie passion. So he was hardly a novice when he spotted it and realized what he had come across. “I’m no stranger to classic Chevrolets as I have owned too many to count,” Marc relates. “Now, I am almost 53 years old and have been driving classic Chevys since the age of 17.”

Three of his previous cars were frame-off builds so he knows the time and challenges involved when constructing these machines. He was initially engrossed in the Pro Street scene, starting with a couple of ’55 Chevys, one LS6-powered for daily driving. The other, running an 8-71 blown 509, “was built to rattle the fillings loose in your head.”

During the lengthy time it was taking to build the second Pro Street ’55 Chevy, he acquired a couple of Chevelles, one with a 468 roller engine and the other with a Pro Touring setup. Bitten by the bug, this project led to another one: a ’68 Camaro. But that’s when his brother-in-law asked if he’d find him a classic Corvette. It was during his search for a Vette that he stumbled across the Nova.

“I loved it because it wasn’t a Camaro or a Chevelle,” Marc says. “When I started looking at the car I was floored with the level of craftsmanship and detail. Definitely a next-level build.”

It turns out that Jay’s Hot Rods in Sacramento, California, had already invested 1,100 hours in the project, even though it first appeared to be in decent shape. “When we first put it on the lift, I was astonished,” explains Jay Hitchcock. “All the chassis components were shot—shocks, brakes, bushings, tie rods. It just wasn’t safe.”

The previous owner of the Nova called it “the Domino” because of all the parts that kept falling over. Jay set out to correct and upgrade everything, doing a complete underbody restoration and restomod with a mini-tub and rollcage. Other hands worked on the car as well, including a suspension tune by Custom Works Performance in Butte, California, and an interior by Robert Craven Upholstery of Sacramento. Once Jay completed the car, the owner enjoyed it for a couple years, but eventually lost interest.

But when Marc encountered the Nova, it was no surprise that he totally forgot about his plans for a Corvette. What did he find to be so compelling about it?

Expelling the exhaust are custom step-up headers, mandrel-bent from 304 stainless steel with 3-inch bullet merge collectors feeding a high-flow X-pipe and Borla XR-1 race mufflers. Despite the Vibrant Performance resonators, QTP cutouts allow for a somewhat stealthier mode in keeping with the slightly subdued look of the car. This low-key character provokes some strange encounters at car shows and cruise-ins.

“People initially walk by with just a glance and then they come back for another long look and ask lots of questions,” Marc says. “Then they start to pick up on the details, like the rollbar through the front window or notice that it’s mini-tubbed.”

After about 30 minutes or so a small crowd will gather—people looking under the car beckoning their friends to kneel down and have a peek for themselves. Then they get to the engine compartment and begin scratching their heads. “That’s when they really start asking questions.”

We asked Mark why he feels his Nova is such an attention grabber. “It’s an Everyman car,” he points out. “It was Chevrolet’s affordable car so lots of people can relate to it. Most people that see it have a story or fond memories about their parents or grandparents having a Nova.”

“It’s also common to hear, ‘I never thought one could look like this!’ That’s what cars like this are all about. It makes people reminisce about good times. That’s the part I like the best.”

“The part that I didn’t talk about was putting the car in storage until I could figure out a good time to tell my wife I bought it,” Marc admits. “I have been known to do this in the past with other cars or engines, so my wife is kind of onto my shenanigans.” The deal made with his wife was that he wouldn’t build or bring any project cars home while they were in between homes.

“Being I didn’t actually have to build this car, I thought that to be the perfect loophole,” he sheepishly points out. “I would clean or tinker with the car on the weekends when my wife was out shopping or engaged in some other activity.”

But the jig was finally up a month or so later when his wife needed something out of the storage unit. “I can only imagine what she thought when she opened the door,” Marc said. “Much to my surprise, she wasn’t that mad and thought the car was awesome. What a relief!”

Now that was yet another strange encounter, but with a good life happening between plans. CHP