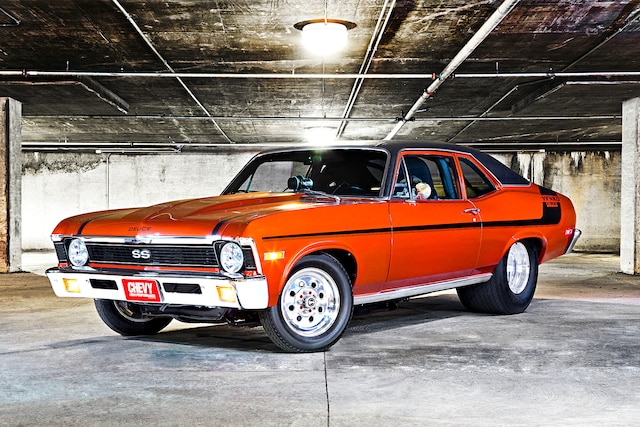 Not everyone that has an automotive passion can indulge in it to its limits. Those limits are usually a moving target depending on many factors like finances, family, time, and, occasionally, a specific skill set if it involves things like fabrication or simply turning some wrenches. For Pennsylvania resident Dave Stagliano, his automotive interests evolved from an early age, but were always compromised by some of those moving targets. He points out, “Ever since I was a kid I used to go with my uncle to Maple Grove and I always liked hot rods. I’ve had cars like an IROC Z28 and a Corvette, but I always wanted either a Pro Street or drag car.” As Dave entered into adulthood, family and business responsibilities made it difficult for him to indulge in his desires. The factory performance cars filled that gap until he was able to look for something that he truly desired.

That threshold was crossed when he decided it was time to buy something that wasn’t driven off the showroom floor—something unique but also well on its way in the build stage. Being a business owner with limited time to devote to a full-blown project, and not wanting to sink a ton of money into a car that had to be torn apart and put back together, a work in progress was the ideal compromise, which is actually the path taken by many who are faced with similar limitations.

At the top of his wish list was a Pro Street ’69 Camaro, with a Nova a close second. Dave quickly found out when he started looking that there was no shortage of first-gen Camaros for sale; however, most of them had hefty price tags that were well above his price point. He was determined to get a Camaro but freely admits, “It had to be one pretty badass Nova for me to change my mind.” When this one popped up locally at a reasonable price, it sealed the deal.

When Dave went to look at the Nova, he was so fixated on what was in front of him that he didn’t really dig too deep to see if there were any issues with the car. What he ended up buying was a 1970 Nova that had already been back-halved with a narrowed Dana 60 installed. At the front it had a QA1 adjustable suspension in place, and QA1 coilovers at all four corners. Under the hood was a 454ci LS7 backed by a TH400 transmission. It appeared to have had a fresh coat of GM Sunburst Orange II Metallic paint applied, along with some Yenko-flavored stripes at some point. What he also bought was a car that had been passed along by a number of people, with no clear history of its origins. Dave did some digging and was able to find some information on the car, but was never able to track down the guy who initially had it built.

It was a work in progress for Dave that also appeared to be a work in progress for all the previous owners. He did manage to find someone that had done a fair amount of work to the car. Bill Moss, the owner of Bill Moss Auto Repair in Warminster, Pennsylvania, was responsible for fixing many of the gremlins on the Nova for a previous owner. Bill sent him a laundry list of things that were repaired and upgraded. The swap to the QA1 front end was done at his shop; however, the bulk of the work appears to have revolved around the electrical system, which was still not fully sorted when Dave drove it home.

After a few weeks with the car, he started planning what upgrades he wanted to do. It helps to have good friends, and equally good neighbors—especially ones that have lifts at home to facilitate things. His neighbor Pat Klem has been that facilitator. When they first started digging into the Nova, they found crushed brake lines and fuel lines, and a fuel system that was a mess, which they repaired. The car was also being robbed of performance with an inadequate exhaust system, which was equally sorted with the addition of larger plumbing and some Flowmaster Outlaw mufflers. Perhaps the biggest issue has been fixing the electrical issues that seem to have plagued this car all along. Half of the interior electrical system and gauges weren’t functional, which was finally fixed.

These issues have kept Dave from moving on to do other things on the car. The positive side has been the drivetrain. The LS7, which for many is deceiving when the hood is popped isn’t what folks have come to expect when they hear that engine designation. This is an old-school mill that was developed as a replacement for the LS6 back in the early ’70s. As a result of the gas crisis in 1973, it was never offered in any vehicle; however, it did end up in the Chevrolet Performance catalog as a crate engine and can be identified today with the XCH stamping. These powerplants were all business back then, with an officially rated power minimum of 500 hp. Originally equipped with 12.5:1 pistons, at some point this Nova underwent a piston swap to a more street-friendly 10.0:1 set. The rock solid combination of the LS7, TH400, and Dana 60 has allowed Dave to light the tires at will—to the point that he has massacred a set since getting the car.

Since we shot the car, the 2-inch cowl hood has been swapped with a taller 4-inch unit, and there is a ProCharger supercharger installation in the works, too. There are also interior changes on the horizon that Dave hopes takes the car to the next level. He has no regrets about buying it, and is enjoying the time he is spending with his family going to shows in it. CHP

How To Splice and Weld a Partial Panel Replacement