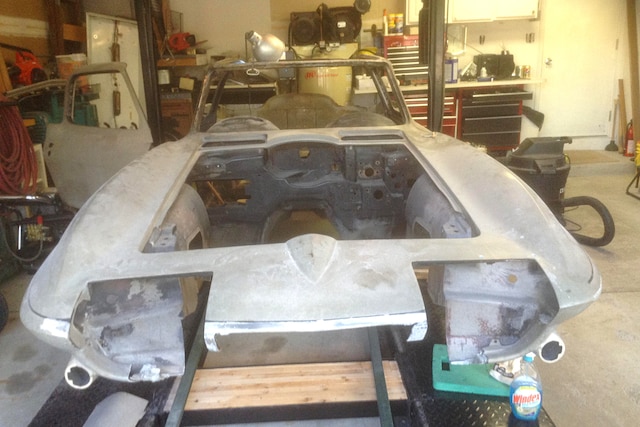 When Jack Jagello bought this 1964 Corvette, the salesman at Shalla Chevrolet at 16701 Harper in Detroit told him the Tuxedo Black coupe came from the GM building.

“I made up a dolly and put the frame on it, and the body on top of the frame, and that’s how they hauled it to his (Werner Meier’s) shop.”

“I used to work in that area, and they had a turntable where cars went round and round.”

That might explain the two wires that Jagello spied protruding from the overhead light in the coupe when he made the purchase in November 1964. Jagello figures GM turned the light on with auxiliary power.

“I bought on eBay a whole roof for that car. And I removed it myself, and it extended from the top of the windshield all the way back to the taillights.”

GM was promoting the 1965 model now, so they let go of this 1964 coupe that Jagello describes as “stunning, just beautiful with silver interior that really sets it off.”

Apparently, GM held onto the car until the end of the model year. This coupe was one of the last 1964 model Corvettes sold by the dealer.

“If you saw the car when Werner picked it up you would think, why spend the money restoring this thing? It’s in pieces. There was no roof, no taillight panel and no left rear fender.”

The coupe’s specs lend more credibility to the GM “Brass Hat” and executive origin, starting with the black-on-silver color combination, AM/FM, power windows and the 365-horse 327 backed by a four-speed.

Jagello was 20 years old and traded in a first year Mustang he had owned for five months. The Corvette was $4,200.

“If it wasn’t for my wife, it would still be sitting in my garage. She asked, “what are you going to do with your car? Let’s develop a game plan.”

“I was looking at Corvettes, and I became friends with a salesman there at the dealer, and on a Friday he called me up and said there’s a car down here that I think you might be interested in. This was November of 1964. The 1965s were already out and he took me to see the car. It was stunning, a black coupe with a silver interior. I was just, “Wow.” And, “I put $5 down on that car and it became mine.”
6/8

In October 2018, Masterworks Automotive had the body put back together and painted

Today, Jagello wishes he had researched who ordered the car new at Chevrolet because he parked the 1964 Corvette in 1977, and in October 2017, at the urging of his wife to come up with a restoration plan, sent the car to Madison Heights, Michigan, and Masterworks Automotive Services, owned by Werner Meier. Meier is a former GM engineer turned Corvette restorer and Corvette Hall of Fame Inductee in 2013. Werner is famous for finding and restoring GM “styling cars” and other historic Corvettes.

No doubt, Tuxedo Black with silver interior is extremely rare. If anyone knows more history on this Brass Hat car, please email: jerryheasley@gmail.com.

Meier believes this 1964 is a Brass Hat Corvette assigned to an executive in the GM building.

Jagello is happy he kept his old Corvette. He already felt these cars were becoming collectible in 1977. Vette

Jagello stripped his 1964 Corvette down to bare fiberglass with lacquer thinner and steel wool.