If your first crack at Pro Street glory doesn’t succeed, try, try again ... with a big blower and a hot stance 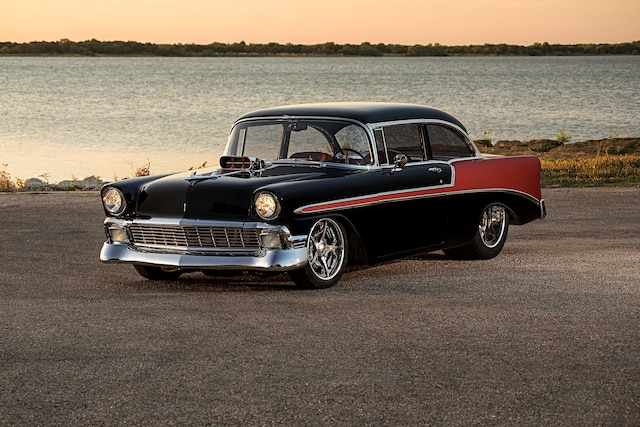 When the dust settles from World War III, the only things left will be cockroaches and Pro Street. Like a crazy ex-girlfriend, big ’n’ littles cars keep coming back, even after your wife finds out about them. Of course, things that refuse to go away are only bad if—like cockroaches and crazy ex-girlfriends—they have no redeeming qualities. That may have been the case with old-school Pro Street, but cars like Jeff England’s supercharged ’56 Chevy can teach us all a thing or two about how to make a bygone trend relevant once again.

For Jeff, the path to Tri-Five glory started as a youngster, when he used to tag along with his dad and uncle to the local dragstrip. “They raced a ’55 Chevy, and I thought it was the coolest car in the world,” he reminisces. Interestingly, it wasn’t until several decades and many muscle cars later that he finally decided to take the Tri-Five plunge. “I’ve had a little bit of everything over the years, but mainly Corvettes and Camaros. One of my favorites is my big-block ’69 Camaro. In 2005, I bought a ’56 Chevy from a drag racer. Since the plan was to build a Pro Street car, I felt it would make a good starting point for the Tri-Five I had always wanted.”

As a retired race car, the ’56 Chevy had seen better days. “When I picked it up, the car was a rolling chassis with no motor or trans. There wasn’t a whole lot left of the original body,” Jeff recalls. “The body was wavy and badly rusted, so we peeled it way down and replaced the trunk, doors, and quarter-panels. While everything was apart, we tubbed it out and built a custom chassis for it. We worked on the car in my home shop, so the project wasn’t completed until 2012.”

Unfortunately, the prolonged gestation period for the build meant that the finished product was out of style immediately after the project was completed. “It was a nice car, but it just didn’t turn out the way I hoped it would. We got the car done just in time for it to not be in style anymore,” Jeff laughs. “It had a TPI motor and one of the last sets of Boyd Coddington wheels ever made. The car didn’t sit right, the interior didn’t pop, and overall the look was past its time.”

To make the best of the situation, Jeff sat down for a consultation with Mike Dusold of Dusold Designs (Lewisville, Texas). Together, they came up with a plan to modernize the ’56 Chevy while still retaining some of that old-school vibe. “I wanted to keep the nostalgic theme. I wanted it to look and function like a modern car without taking away from the heritage of the Tri-Five. Once the car was at Mike’s shop, he updated the suspension, changed the stance, completely redid the interior, and came up with a traditional two-tone paint scheme using satin.”

Nothing screams Pro Street like a big blower, so the outdated TPI induction has been replaced by a Weiand 8-71 huffer that sits atop a 468-cubic-inch big-block. It sends an estimated 700 hp back to a GM 700-R4 overdrive and a 9-inch rearend. To help stabilize the four-link rear suspension, Dusold built a custom Panhard bar and fine-tuned the geometry. A set of JRi coilovers contributes to the mean stance, and modern stopping power comes courtesy of Wilwood disc brakes.

While updates to the chassis and running gear make a huge impact from afar, Jeff is equally as appreciative of all the little changes that make the overall package more polished and refined. “We moved the shifter from the column to the floor to bring some of the nostalgia back. I was adamant about putting back seats in the interior to make the car period-correct, which is very hard to do with tubs,” says Jeff. “The dash has been completely changed, and Mike came up with a cool idea to use Cadillac door panels.”

After a very long, decade-plus journey, Jeff finally has the Tri-Five he always envisioned. The finished product masterfully blends traditional and modern, and if not for the blower scoop and 31-inch Mickey Thompsons, it could pass for a Pro Touring machine. By combining the best of old and new, Jeff has created a big ’n’ littles car that’s actually functional and enjoyable to drive. If our hot rodding forebears were wiser, this is what Pro Street should have been all along. CHP