Check Out This Outrageous and Unique AWD 1968 Camaro 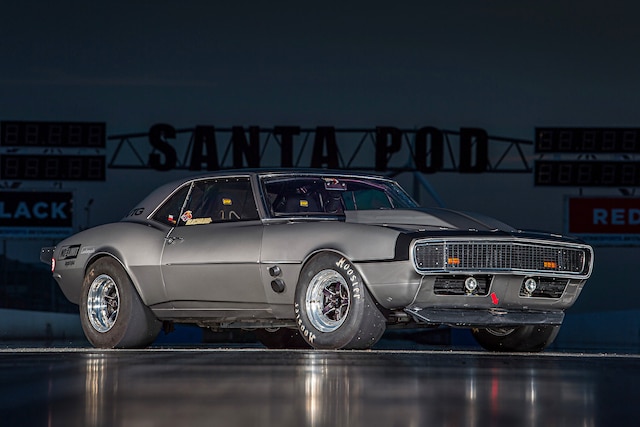 “All the time we were aware that the USA is the cradle of drag racing,” he said. “And that we needed to copy proven solutions and adapt them to our conditions. It all began by coincidence; the cousin of a friend had a GMC Typhoon for sale, so it was an all-wheel-drive car and also American-built—perfect for our needs. About 10 years ago we found Les Young, who had a great deal of experience racing Syclone/Typhoon platforms, at his site syty.net.”

Les wanted to help, you know, one hot rodder to another, a simple gesture and very much in the spirit of hot rodding. That’s how the Polish racing Typhoon came to be.

To set the background, Bartek explained. “Let us say that drag racing was not popular here until the beginning of this century. But before that there was always a spirit that would not be blunted. Since there were cars, there were street races at traffic lights but there were no rules and the distance of the race was not always the same.

“Although it may sound funny, the original The Fast and the Furious movie is what really popularized drag racing in this part of the world. After that, quarter-mile racing appeared at the car meetings, but because of the fatal surface of the old airports where they were organized, the all-wheel-drive cars were the fastest. To better illustrate how far behind we were, we had the first Polish 10-second car, an Audi we built in 2004. We quickly caught up and made the first 9-second pass in 2005.

“The main question about the AWD in the Camaro is ‘why,’ but ‘how’ is in second place. In the absence of tracks in this part of Europe, we race mainly at old airfields, which often are not even swept. In these conditions, AWD cars are just naturally faster.

“And AWD in the Camaro (that we got from a Norwegian who raced it in Poland) yields very high efficiency, regardless of racing conditions. And compared to the Syclone brick, the Camaro has a superior coefficient of drag, which means it’s a lot slipperier through the air. For a comparison test, we left the tune from the record 7.7-second pass at Santa Pod (Podington, Bedfordshire) for the next competition taking place on the asphalt runway in Poland. Although the Camaro overpowered the wheels, and smoked the tires through Second gear, we still ran an 8.3-second time.”

And when it comes to how it was built, this is all a fairly simple matter—only requiring massive surgery. They cut off the Typhoon frame, welded it in place of the usual Camaro front subframe and strengthened the whole accordingly. A little work on the new floor and transmission tunnel and after a few months they had an AWD Camaro, and ever since they have been changing things to grow its performance.

“We use Rossler’s TH210 transmissions, which in our case is a close-ratio three-speed automatic based on the GM TH400. Rossler calls them TH210 or Turbo-Glides due to their numerically higher Low gear ratio and because he builds them with so many of his own proprietary parts. We’ve modified the original Typhoon transfer case fitted to the end of the transmission, and torque is distributed through it to the front and rear differentials.”

Inclination comes from a twin-turbo, 409-cubic-inch small-block, the attributes of which are listed thoroughly in the specifications chart. As an ancillary bump, VTG introduces a small squirt of nitrous oxide at the right time to get the Turbonetics twins spooled up quicker. The unorthodox ’09 breaks out an attention-getting 1,730 horsepower at 7,350 rpm.

Bartek: “Cars are often divided into classes depending on the type of drive (FWD, RWD, and AWD). In each country it’s a bit different, but there’s always a class we can race. This year, for example, at Santa Pod in the Doorslammers event the Camaro competed in the Pro Street class. In the Polish Cup event we were in the Profi AWD Turbo class; in the King of Germany competition it was in the 4WD class. In the grand finale for the four fastest cars in each class for the title of King of Germany, we won!”

Sit still for another minute. There’s more. “In the Ukrainian Cup, the Camaro could run in two classes—Pro AWD and Unlimited (no restrictions)—which we also won. So far, apart from the red light at the Santa Pod race, we’ve had a very successful season,” Bartek said. Then he added: “Even with good racing livery it’s still kind of a sleeper. The spectators didn’t pay it any attention … until they saw how it worked.”

The next big step for Blauth, Bartek, and the VTG combine? Well, to keep stepping up, of course, pulling the Camaro out of Poland to a town near you while trying to rearrange the field on Hot Rod’s Drag Week skirmish. They need to start an international incident. CHP