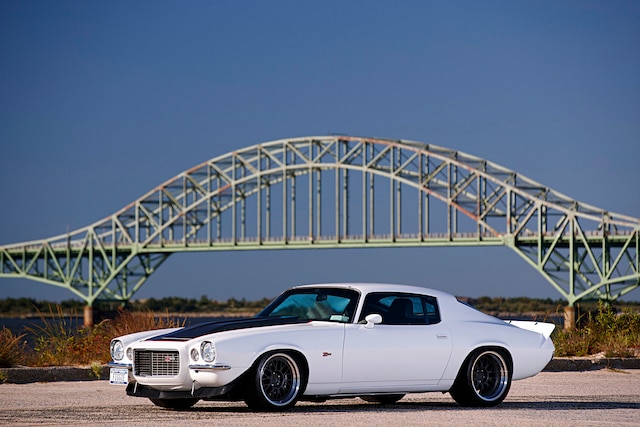 Don “Figgie” Figliozzi squeezed every drop of enjoyment out of the Camaro Z28 Rally Sport that he bought brand-new back in 1973, and the sweet memories associated with it lived on long after the car was gone. “That was a great car and I always knew I’d get another second-gen Camaro,” Figgie tells us. “So for years I kept an eye out for the right car. I didn’t want something original or rare because I knew I would build it up into a Pro Touring ride.”

Figgie is a professional pinstriper and sign painter so he’s in and out of car dealerships and body shops all day long. The moment he saw the ’72 Camaro sitting in front of one of those body shops, he knew he’d found the right car. “It was pretty rough,” he recalls. “But it was all there and would be a great starting point for the build I envisioned.”

After sealing the deal, he took his new acquisition completely apart and bolted the shell onto a friend’s rotisserie. Once the old paint was stripped, he cut off all of the damaged and rusty sheetmetal. As is typical in the northeast, the Camaro needed a complete floor, both quarter-panels, and new doorskins. With help from pals Dennis DeVeau, Doug Cooper, Victor Leal, and Big Al, Figgie fitted and welded in all of the new sheetmetal, which was sourced from Auto Metal Direct.

While he had a cutoff wheel and welder within reach, Figgie also made a few select modifications to the body. Since he intended to significantly lower the car he added clearance to the floor in the area of the rear seats so he could tuck the mufflers to prevent them from scraping. In a similar vein, he modified the transmission tunnel for the increased breathing room the switch to a six-speed manual demanded and installed Detroit Speed Inc., (DSE) mini-tubs to house more rear rubber. With the heavy metalwork all taken care of, Figgie added a few subtle body modifications. He reworked the rear bumper recesses in the quarter-panels to achieve a tighter fit for the rear bumper, which has been narrowed by 1 1/4-inch. He filled all of the bolt holes in the front and rear bumpers, and also filled the marker light and door lock holes in the body. On the aero front, he custom made an adjustable rear spoiler and front splitter, and modified the front pan by adding an air intake on the right side.

Once all of the sheetmetal was done, Figgie turned his attention to the finish bodywork. That was followed by a thorough coating of PPG DP90 primer. To deaden sound and further protect against corrosion, he sprayed grey-tinted bedliner coating on the underside of the floor and black bedliner coating inside the wheelwells. The body’s exterior was coated with white PPG DPS-3051 primer and then block-sanded to perfection. Once the body was as straight and smooth as possible, Figgie painted it with two-stage PPG base tint white, with help from Black Forest Auto Body. For maximum depth and shine, the clearcoat was sanded and polished until it was flawless. Figgie used BMW Space Grey Metallic for the central graphic and then accented it with surrounding red and light grey stripes. Billy B from Billy B Cars in Glen Cove, New York, very carefully reworked the grey in the center of the hood, trunk, and trunk filler panel with gold 3M Clear Blend Prep Scuff Scotch-Brite pads to give it a brushed look.

Figgie and friend Bob Toby replaced the stock GM front subframe with a new one manufactured by DSE. To improve ride and handling, and reduce weight, he added DSE tubular upper and lower control arms, DSE large-diameter tubular antiroll bar, DSE spindles, and JRi single-adjustable coilovers to the hydroformed subframe. This combination takes about 4 inches from the car’s front ride height. A Classic Performance Products (CPP) steering column sends the driver’s input to a DSE rack-and-pinion unit, and the power steering fluid is kept cool by a NASCAR cooler.

At the rear, original leaf springs were discarded and a DSE QUADRALink suspension system, including an adjustable antiroll bar, was installed. This setup uses JRi single-adjustable coilovers and a four-link design with geometry that yields better traction, increased stability, and a smoother ride compared with the original rear suspension. The new setup also lowers the rear of the car approximately 5 inches.

For motive power, Figgie bought a complete LS3 engine and then made a few changes, starting with a Comp Cams retrofit trunnion kit to convert the stock rockers into roller trunnion units. He went with an MSD Atomic EFI system, a high-output Aeromotive 340 Stealth fuel pump, and a Powermaster 140-amp alternator. Engine temperature is kept in check courtesy of a high-flow water pump and CPP four-row aluminum radiator. Overall engine health is furthered along by a Moroso 8-quart oil accumulator setup. Billet Specialties was tapped for the engine’s front drive arrangement. Spent gases exit via 1 7/8-inch stainless steel American headers, 3-inch stainless pipes, and MagnaFlow mufflers in a system put together by Bob Toby.

The LS3 sends its power to a TREMEC T-56 six-speed taken out of a Viper. Tommy V at SuperPro Performance Chassis in West Islip, New York, went through the gearbox and installed a Chevrolet input shaft. Shifting is aided by a McLeod RST twin-disc clutch contained inside a Quick Time bellhousing. After exiting the T-56, the engine’s twist spins a 4-inch aluminum driveshaft that’s hooked up to a Moser-assembled Ford 9-inch rearend. To ensure the rear’s longevity, Figgie went with 3.73:1 gears, a Wavetrac limited-slip differential, and Moser 35-spline axles.

Inside the car, Figgie chose to maintain the Camaro’s general layout and ambience, but didn’t hesitate to upgrade numerous things to improve form and function, starting with a Vintage Air A/C system and a DSE roll bar, installed with assistance from friend Bob Nelson. The Camaro’s original seats yielded to Corbeaus, which were covered with black vinyl by R&R Seats in Plainview, New York. Figgie made his own door and side panels, and finished them with BMW Carbon leather. Custom door trim was made to Figgie’s design by Eddy and Bill from At Signs. New OEM-style carpet came from Classic Industries. Interior hardware changes include the installation of a Budnik steering wheel and Steeda Autosports shifter. The factory dials yielded to a full complement of AutoMeter gauges housed in a carbon-fiber dash insert.

This Camaro’s build took Figgie exactly two years to complete and he enjoyed every moment of it. “I’ve built many cars in the past,” he recounts, “but none were more fun than this one. I loved the engineering aspects of the build, especially custom-making the rear spoiler, which was very difficult to do. I also appreciated working alongside a lot of my car buddies. You can’t build a car like this without help from your friends, and I appreciate all of them!”

Week To Wicked Day 4: Moving Closer to Finishing Our 1972 Camaro