525hp Makes This 1972 Chevrolet Corvette Unlike Your Father’s! 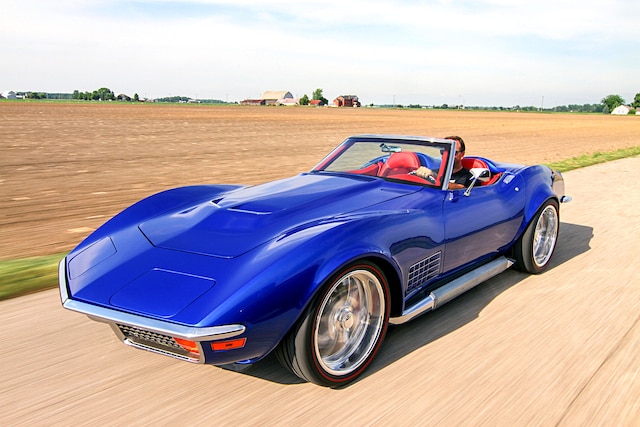 Every one of us has wondered what happened to a car we sold years earlier. For Jeff Monchilov, that car was a 1972 Corvette he purchased in 1985, while in high school.

Over the next year, the ambitious teen stripped, sanded and restored the Bryar Blue roadster, including rebuilding the numbers-matching 350 engine. A set of period Cragar S/S wheels topped off the high school resto.

But Monchilov was and continues to be one of those enthusiasts who’s always looking to the next project, so it wasn’t long after car was completed that he sold the car to a woman in Bay City, Michigan, about 25 miles north of his home in Frankenmuth.

Plenty of cars passed through his garage in the succeeding decades, but Monchilov never forgot about that Corvette.

“I think everybody wants to know if their old car is still on the road or wrecked,” he says. “When you invest your time and energy into a project, it’s only natural.”

About four years ago, Monchilov decided to act on that impulse and had a friend do a VIN search for the car. After nearly 30 years, the car was still in Bay City and owned by the same woman who purchased it in 1986. It hadn’t been registered for years and had been sitting, parked in her garage, since 1998. And while she hadn’t driven the car for nearly 20 years, it wasn’t necessarily for sale, either.

“It was a thrill to find the car and even more exciting to find it was still so close and owned by the person I sold it to in 1986,” says Monchilov. “We talked and came to an agreement, and I bought back the car.”

The car had been painted again at some point, but it was in overall good shape, especially the rust-prone frame.

“It had a really good frame when I bought the car and I made sure to check that right away,” he says. “Thanks to the car being stored indoors, it was still in good shape, but the rest of the car simply needed to be redone again.”

Rather than a straightforward restoration, Monchilov’s second go-around with the Vette would take the restomod route. He’d already had plenty of experience modifying C3s with C6 design elements in recent years and this project would blend some of those elements in a truly unique package.

“The idea was to retain the classic cues of the 1972 and enhance them with other styling elements,” he says. “I wanted the details to reveal themselves the more people looked at it.”

The hood is a perfect example. It looks like a straightforward addition of an LT-1 hood, until you notice it’s not. Monchilov started with a 1973 long hood, which eliminated the earlier-style “trapped” design and separate wiper cover panel, and grafted in the LT-1 hoodscoop. Then, he added the 1973-’75-style rear hood vent, but widened 4 inches to match the lines and proportions of the hoodscoop. It’s an exquisitely detailed design feature on the car that represented countless hours of attention to detail.

Similarly, the rear quarters were replaced with panels from Custom Image Corvette that incorporate 2-inch flares, while the rear valance was molded into the body. Up top, Monchilov crafted a C6-style decklid and “waterfall” feature that incorporates the same C6-style fairings behind the seats. Again, it’s a well-integrated and well-detailed feature that would challenge casual observers to find the non-original elements.

The interior is decidedly less subtle, with a C3/C6 dash and center console that Monchilov designed. It’s fitted with Dakota Digital HDX gauges, the color of which can be controlled via a smartphone. The seats are modified C5 units, cut down at the top to better fit the contours of the cabin and line up with the fairings on the decklid. Steve Holcomb, of Pro Custom Auto Interiors covered the whole interior in red, French-stitched leather. It’s gorgeous.

Despite the car being a numbers-matching 350/air-conditioning model, the original drivetrain was ditched in favor of a modern LS conversion, with a Chevrolet Performance Connect & Cruise system featuring the LS376/525 crate engine and 4L70E automatic transmission.

The LS376/525 is essentially an LS3 with the hotter “ASA” camshaft, offering 0.525-inch lift on the intake and exhaust sides, 226/236-degrees duration and a comparatively tight 110-degree lobe separation angle that gives the engine a decidedly aggressive lope. It also pushes output to 525 horsepower.

With engine mounts and a transmission crossmember from Custom Image Corvette, Monchilov says the LS/4L70 combo slipped into the chassis without a hitch. “It all bolted in easily,” he says. “We didn’t even have to massage the trans tunnel or anything like that.”

Of course, the devil in an LS swap is in the supporting details such as the cooling system, accessory drive and exhaust. There’s a high-capacity Be Cool radiator and electric fans for cooling and Concept One pulley system for the accessory drive. Classic Performance Products supplied the headers to fit the C3 chassis, which flow into a Sweet Thunder chambered side-exhaust system wrapped in 1969-style side pipe covers.

The 4L70E trans channels the LS’s torque to a 3.73-geared, posi-equipped axle from Vtech Corvette, which is routed to the pavement via 19-inch Schott Venom wheels. They measure 9 inches wide in front and 11 inches wide in the rear, rolling on 275/35ZR19 and 325/30ZR19 Diamond Back Classic Redline rubber, respectively; making those flared rear fenders all the more necessary.

Also supporting the powertrain, which delivers more than 260 percent more power than the original 350 engine, is a set of Baer brakes, featuring 14-inch rotors and six-piston calipers at each corner. There’s also a complete RideTech suspension system with coilovers, a Borgeson 600 steering box and Flaming River tilt steering column.

It all adds up to more than two years of challenging and sometimes frustrating work on the car.

“I was always chasing time to get it done,” says Monchilov. “Making the custom parts was the most challenging and time-consuming aspect of the project, but it was all worth it in the end. They came out looking great.”

Since its completion in early 2018, Monchilov’s second-time around Corvette has garnered plenty of attention and accolades, racking up an award at the Detroit Autorama, in its first showing, and joining the list of contenders for Street Machine of the Year at the Columbus Goodguys event.

“The reaction has been great because I’ve built the car the second time the way I would have loved to when I owned it the first time around,” he says. “It’s now everything I always wanted it to be when I was in high school.”

If only we could all say that of our waistlines and hairlines, and of the opportunity to rekindle the experience with that car that got away oh so long ago. It’s no matter that it took another 30 years to realize the dream for this Corvette. Jeff Monchilov persevered and built it. Vette