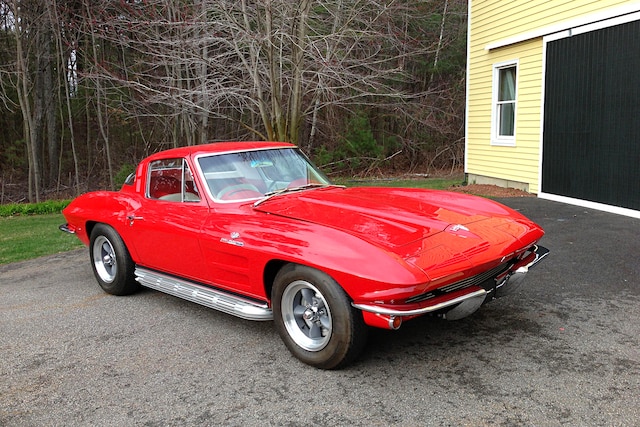 “I had David Brigham come over to my shop and I stripped the paint and primer off the area of the door on each side where the lights were,” Joe Scafidi said. “At the long races at Daytona, they needed a small light in each door to light up the number to race at night.”

What had started out as a rare enough discovery, a 1964 big-tank fuelie was looking like a possible vintage race car. Scafidi, who owns The Bow Tie Shop in Billerica, Massachusetts, and Jonathan White, his client who was buying the old Corvette, were very excited. This 1964 just might be a vintage racer from 1964. The NCRS has a validation process. That was Brigham’s job.

This barn find began with a phone call White made to his attorney to make a contract for another Corvette restoration with Scafidi. The timing proved to be incredibly lucky. White’s attorney was settling a case between a Corvette buyer and a seller from 15 years ago. The car was “a couple towns over,” and purported to be a “big tank fuelie,” which White knew was an exceedingly rare Corvette, with only 38 made.

At first, Scafidi balked at the possibility of a big-tank Corvette, due to the car appearing orange in the photos. When White said, “No, it’s supposed to be red,” Joe said, “Now, we’re talking.”

“I grabbed my checkbook, Joe grabbed his ramp truck, and we drove out to the seller.”

The 1964 Corvette is on the starting line at Daytona. Multiple classes raced at the same time. Visible on the far left is a 289 Cobra, which was in A Production, same as the small-block Corvette.

Traces of the original racing suspension remained on the car and indicated to Joe Scafidi this 1964 Corvette was a vintage race car.

Six years ago, Scafidi and White traveled to Kentucky and videoed Red Lewis, then in his 80s and sitting on a rocking chair. He’s seen here in his racing garb from the glory days.

John “Red” Lewis got his new Corvette coupe in early February 1964 and quickly began driving the car in SCCA events in Florida, where the modifications were made. He wanted the car to compete in the Daytona Continental but didn’t have his long race license yet. He asked Cale Yarborough and GC Spencer to drive. They drove in both weekend events at Daytona in the American Challenge Cup Race and the Daytona Continental.

Scafidi went to work on the car’s history. He did an NCRS Delivery Data search, which revealed the car sold new to a small dealership called Clay Motors in Manchester, Kentucky.

About a year later, Scafidi “stumbled” on a photo online of a red Corvette race car with white interior. Could this car be Jonathan’s 1964? Their 1964 had a black interior, but running the trim tag codes revealed white was factory issue, more evidence of a match. Plus, road racers ordered the 36 1/2-gallon NO3 big-tank option to cut down on fuel stops.

Scafidi called Bill Gould, a friend that does auto ancestries and is well known in Corvette circles. Gould found one Mr. John Lewis, aka “Red,” living in, of all states, Kentucky.

Gould got the green light from Lewis for Scafidi to call. The stars were lining up. Lewis confirmed he bought a brand-new, red 1964 big-tank fuelie to race when he was living in Manchester, Kentucky. Scafidi and White traveled to Kentucky and videoed hours interviewing Red Lewis, in his 80s sitting in his rocking chair beside his dog.

White’s big-tank fuelie was the race car that Lewis bought in early February 1964, and immediately began driving in SCCA events in Florida. Cale Yarborough and GC Spencer drove the car at Daytona that year because Red did not get his long-distance race license until later in the year. After the ’65 season ended, Red sold the 1964 coupe to a man that converted the car back to street use.

The final validation came from the NCRS. David Brigham was there to watch the magic pop out of each door. Scafidi exposed two round holes, one per door, as he sanded off the red paint.

Red had his long race license before the end of the season and competed in the Paul Whiteman race at Daytona. Lewis finished the ’65 season, retired his 1964 Corvette from racing, and sold it to a guy who turned it back to a street car.

First AP on this old trophy, won by Red Lewis, refers to first place in A Production, which took place in Osceola, Florida in June 1964.

The “oh wow” moment came when Scafidi sanded each door to reveal a hole for the lights to illuminate the numbers on the doors.