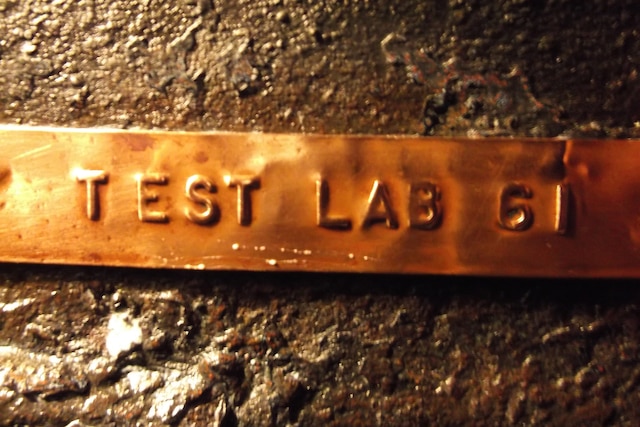 The day after he bought this 1963 Corvette in 1986, he found this inscription on a tag attached to the frame behind the driver-side rear wheel.

Could Test Lab 61 be the only test car Corvette to escape to the public?

Maybe at one time Zora Arkus-Duntov test-drove this Daytona Blue beauty around the GM Proving Grounds and even on Woodward Avenue?

Cook recently retired and got this car running after parking it in his garage for 32 years. Finally, after years of collaborating with the late and great Noland Adams, legendary Corvette historian, and researching on his own for all this time, Cook is divulging the secrets of Test Lab 61.

In 1986, Cook noted the 1963 had already been repainted with lacquer and back to its original Daytona Blue, but everything else on the car appeared original. Furthermore, over the years, Cook has “not touched anything,” and took Noland Adams’ advice not to drive the car and to be careful what he replaced on this car because “what might not seem original might be original to the true testing of the car.”

How wonderful Adams’ advice has proven, as we can now look back in time at a piece of Corvette test car history that for 1963 was a portent of the future.

The 327 is apparently modified, or were these features part of the test car setup? Cook preserved the originality over 32 years. He replaced the obvious hoses, belts and clamps with factory correct parts, only replaced if necessary. Every part that has been replaced has been labeled, boxed and stored.

On purchase, Cook noted the engine block did not match the VIN, which allowed him to “talk the guy down a few bucks.” Of course, neither party knew about Test Lab 61. With what we know now, the 327, seemingly modified, in all likelihood was the de facto test car engine for this vehicle.

The Dark Blue interior came with the 6,500-rpm “buzzer” tachometer, which was available on the 340-horse option for 1963, but which GM dropped very early in the production run.

Furthermore, the 1963 date casting numbers for the block (May) and heads (August) pre-date the September build of the car. This is strong evidence the engine is specific to the test car.

Cook paid $40 for an NCRS Shipping Data Report, which revealed serial number 000101, built on 9/11/62, was sold to dealer zero in the zone zero with the dealer address listed as “GM Vehicle.”

The NCRS Shipping Data Report reveals the name of the original dealer was GM Vehicle.

Another unanswered question gives this car even more mystery. Could this very 1963 split-window have been the famed Woodward Racer, Cook heard in his many car talks, that “was shutting down everything on Woodward Avenue,” in the 1960s?

The 4.56:1 gears certainly give credence to this legacy. Cook believes any ’63 split-window was rare on the streets in the early production days, so this car would have stuck out. The NCRS, Cook notes, believes Test Lab 61 might have been an executive car that was open to test-drive and evaluate because the car wasn’t hacked up like some of the test cars.

This thin copper strip stamped Test Lab 61 was the clue that sent Brad Cook on a 32-year odyssey researching the provenance of his 1963 Corvette split-window.

GM assigned numbers to test cars to reference on their testing reports, which might include—Cook has researched (through GM archives)—lap times at Sebring, and changes that Zora would request to improve performance. Maybe one day Cook will uncover the entire test-car data from the GM files.

Maybe one of our readers has more information to tie Test Lab 61 to either a GM test car or that infamous street racer, which was also Daytona Blue. Please email me on this. Vette