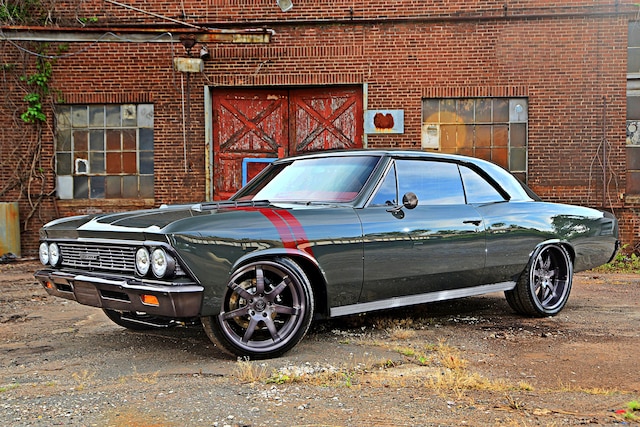 When you’re faced with a challenge, you either rise to the occasion or suffer the consequences. That’s just a basic fact of life. It’s sink or swim these days, so if you can’t tread water without your swim floats on then you better paddle real hard and try to keep your cranium above water. There’s just no other way about it.

So when a company comes to you with a proposal that will test the limits of the auto hobby, do you risk it and take on the task presented before you or do you just back away politely? Luckily for us, when Cardone Industries, a leader in the aftermarket parts market, wanted to do something completely out of the box and build an “eco-friendly muscle car” for a sweepstakes giveaway vehicle, they made the right decision and picked a team that could see their vision through to fruition.

Swag Custom Rides of New Britain, Connecticut, is the first and only non-profit restoration shop in the U.S., catering to the motor hobbyist. This first-class facility does top-notch restorations and custom builds, with a goal of not only creating a standout product, but also by helping troubled individuals work through life-altering negative experiences to get back on a good path. Swag took on the project, seeing the big picture here and the goal to be realized at the end of the tunnel.

See, it’s like this. Eco-friendly and muscle car are two totally divergent concepts that once upon a time would never be heard in the same sentence at a local car cruise-in. It’s an oxymoron of the highest level as far as the hobby goes. But Swag took on this test of epic proportions to build a true “dual-fuel” hot rod, and promised to see it through to the end. The project Chevy will be nothing less than a stunning piece of automotive artwork, ready to run on both pump gas and E85 methanol; an upgrade that can be considered environmentally friendly and useful out on the open road. So the creative crew at Swag sat down and devised a plan to bring this dual-fuel muscle car to fruition. “We struggled with the idea at first, but then caught some vision with the project; designing a ground-up American classic muscle car that would showcase a commitment to environmentally conscience endeavors,” says John Muratori, head honcho at Swag Custom Rides.

The first order of business was sourcing the right car from which to build this innovative ride. “I wanted a car that represented true Americana, and a model that hadn’t been overly customized by other builders,” says John. Luckily for him, a nice, builder ’66 Chevelle came into the shop for an estimate. After giving it some thought, the owner decided to sell the car, and the two parties came to a deal. It was certainly a car that would be a challenge, as it needed some extra “love” in the body department, but Swag was up to the task of using it as the basis to build their groundbreaking design.

The next objective was to get the body up to snuff. After mediablasting the panels it was determined that there was a lot of work ahead of them. “It needed floors, doors, fenders, quarter-panels, trunk, and hood. The only original part of the car is the roof,” says John. Then they discovered that a lot of the new sheetmetal didn’t fit exactly as planned. “So we had additional fabrication to do to get the car straight with proper gaps,” continues John.

The next step was mocking up the all-important powertrain for this modern muscle ride. A crate Chevrolet Performance ZZ383 stroker small-block was sourced for the project. Upon arrival, the engine was torn down and received headwork to maximize air and fuel flow. The compression was bumped up and the cam lift increased to squeeze every pony possible from the small-block. Swag partnered with FiTech Fuel Injection to provide a throttle body fuel system that could properly burn ethanol and pump gas. Swag then used a modified Go EFI 4 fuel-injection fuel management system to get this Chevelle fed its diet of go-juice.

The switchable fuel source option allows the driver to toggle between everyday pump gas and E85 fuel. Then the crew at Swag took it one step further, devising a system that allows the driver to change up fuel sources on the fly while driving. This added choice really sets this ride apart from other builds in the same genre. That no doubt adds to the “Mystique” of the car.

A CVF serpentine system was installed up front and an MSD ignition supplies the spark. The car was wired up by way of a Painless harness. A 2.5-inch custom stainless exhaust system was hand-fabricated and topped off with a pair of Black Widow Race Venom mufflers to get the tone that Swag desired.

Next, the small-block was matched to a TREMEC five-speed manual transmission, built with a Centerforce clutch, to help get it through the gears. All that power is sent out to a built Chevy 12-bolt rear stuffed with 3.43 gears. The engine was stripped down to make numerous modifications to compensate for the 30-percent increase in Ethanol fuel. There were also alterations made to regain horsepower lost in the process.

After getting the Chevelle’s body razor straight, the flanks were basted in a unique color combo: PPG Grigio Scuro Gray with deep-red Chevron-style stripes on the front fenders, laid on by the professionals at Swag to perfection. Once that was accomplished, the boys laid on several coats of PPG Glamor Clear 8152 to make this thing shine like a polished diamond.

The interior is nothing less than stellar, done up in a matching brick-red color. Pertinent parts were sourced from a Subaru Outback, fabricated to fit, and re-covered by CZ’s Auto Upholstery in Southington, Connecticut. A Dakota Digital HDX gauge set keeps track of the vitals. An FS steering wheel keeps this ride pointed in the right direction and a Haymaker custom A/C system from Restomod Air keeps the climate where it should be, even on the hottest summer days.

The wild rims are by Hot Rods by Boyd (HRBB), and customized by Chris Coddington. The wheels should be in production after SEMA this year. Stopping power is supplied by Wilwood six-piston calipers up front and four-piston calipers out back, along with a Wilwood manual master cylinder. The car sits on its original chassis for a reason. “We wanted to use bolt-on components to showcase what the DIY’er could accomplish—altitude and attitude for the weekend.”

Upgrades to the chassis include a QA1 Stage-3 suspension for more control and driveability. The chrome and stainless pieces have a unique finish. All the trim and bumpers were hand brushed clean and finished with a translucent smoke powdercoating.

The car was completed—start to finish—in an amazingly short three months. The Chevelle was a sweepstakes car that was given away to a lucky winner who was flown to Hot August Nights in Nevada this summer. The winner also received $15k to pay for the taxes on the car. John would like to thank client Cardone Industries for giving him the complete freedom to design and build such a beast. And, of course, this would not be complete without a shout-out to the Swag crew of outcasts and young guns who pulled insane all-nighters to see this project through to the end.