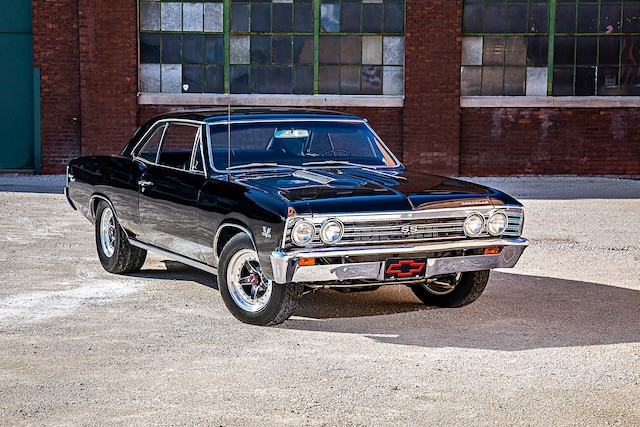 You might forget a birthday. You might forget your third girlfriend’s name. You might even forget what you had for breakfast yesterday. But you’ll never forget the day you were sucked into the car thing and trapped in it like a beast in a tar pit.

Mark Young’s slow, inevitable ascent up the chain didn’t begin on concrete or asphalt. His feet were in the dirt, every Friday night in Chesterfield, Virginia, at Southside Speedway, the fecund short-track in his home burg. When he was 17 he’d had enough of the prosaic, he pulled stakes and went where the money was, in the north, to Chicago.

Seven years in he quit the car scene, married Jenny and they had a couple of kids. As his oldest son came of age, the kinship was undeniable; Mark rejoined the mystical ranks. Along about 1997, he was working alongside someone who had a 1967 Chevelle SS equipped with the juice lifter L35 that mustered 325 horsepower.

Mark lusted openly. “I told him all the time how much I liked it. I would visit him, you know, just to see the car. I kept at it. Three years later, he sold it to me and shortly after that, he decided to move. My wife and I bought his house. It had a 30x36 garage, but more important, it was heated. A new chapter in my life started.”

The Chevelle had been someone’s twist for a long time, so long that no one could remember the original painter or what paint was used (it looks pretty black to us). In its early life, it had suffered a frame-on resto that included replacing sketchy floorpans. Lately, though, Mark performed a body-off stint, mainly to rehab the chassis. JJ Powdercoat in Zion, Illinois, preserved it with Monarch Black semi-gloss. Mark counts a few close friends as co-conspirators; they poured in two years of grunts, curses, cases of beer, likely stentorious aromatherapy (from all that beer), and fun until it was well enough to drive.

Mark was after a combination: old-school looks and styling cues clapped with a bigger big-block orchestrated by modern fuel delivery. The engine’s a forged “crate” short-block built by BluePrint Engines. Opel Engineering, a local enterprise, staged the headers, camshaft, intake manifold, and ignition. The goal was a fat, unctuous torque curve, nearly 540 lb-ft of it all in at a piddling 2,800 rpm. To complement, the Doug’s primary tubes are undersize (for this displacement) at 1 3/4 inches and provide a modicum of backpressure.

Rather than a fool’s carburetor, Mark would mark time with a FAST XFI 2.0 system driving eight individual fuel injectors. He’d bridge the oval-port Edelbrock cylinder heads by a Victor Jr. intake plate and, to keep the appearance original with a fullsize air cleaner, he fixed a mass air meter to the Victor where a carburetor would normally go. Anyway, more horsepower and grunt than Mark really needs is absorbed by a Turbo 400 fronting a Saturday Night Special converter with a 2,800-stall speed. The 9-inch carries a 3.70 gear and 31-spline axleshafts. To think about this tire-squalling bad boy tends to raise hair in sensitive places.

Setting up the chassis was a breeze. Mark didn’t feel the need for tubular stuff or hydroformed anything. His Chevelle was gonna make it in a straight line. His concession up front was limited to QA1 adjustable dampers. In back, he got more adventuresome: QA1 adjustables working with Hotchkis upper and lower control arms. He put 12-inch rotors and four-piston clampers at each corner squeezed by the OE master cylinder.

Then he blasted his A-body right back to the day; old-school cues that work, gathered the signature around wheels with a 15-inch diameter. Weld hoops with modest 7- and 8-inch stretch, as they would have been yesteryear, capture tall 60-series 235 and 275 aspect Mickey Thompson treads. Hey Mark, thanks for not even thinking about the S/S or Americans cliché; the forged Welds frame your Chevelle right.

So, yeah, the project is really one from the archives, one that began long before Mark picked it. He knew that it had a frame-on resto somewhere along the line but really nothing more than that had been done in 1993. Two years ago, when Mark embarked on the project, the quality of the work was still stand-up, so he was free to concentrate on the customizing cues.

For the interior, he saw no reason to go beyond the original theme, tapping YearOne for the bucket seats, Classic Dash for the slick dashboard insert, and the array of AutoMeter Phantom dials. That good-looking SS steering wheel is original, too. Everything else is reproduction stuff or original.

From all indications, Mark’s old A-body is an absolute gold magnet. At shows. “All together,” he crowed, “I have collected 23 trophies—eight from the Chevy-Vette Fest and six from the World of Wheels in Chicago, and nine trophies from around town. I plan to retire in five years and this Chevelle will be driven daily so long as weather permits.” Mark, after listening to you and your oil burner habit, we think you’d drive it in a rainstorm if the mood struck.

» Read More
After 50 Years, This Chevy Owner Finally has the Chevelle of His Dreams