The Thing That Shouldn’t Be 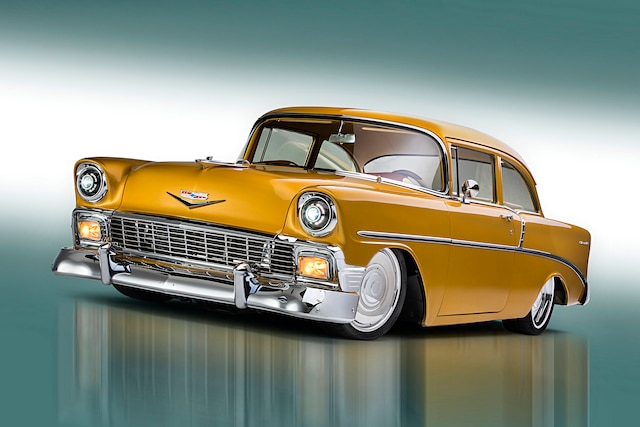 The mere mention of the SEMA show makes an enthusiast’s heart go boom. The event is, quite simply, the mecca for all things automotive aftermarket when it comes to showing them off to industry insiders; the automotive media; and—by extension—the adoring, hungry public. As such, most aftermarket manufacturers use the show to make a big splash by debuting new products, displaying their hottest sellers, and building outrageous vehicles designed to capture the enthusiast’s attention.

Perhaps no company understands this concept better than the folks at TMI Products, manufacturer of hot rod interior upholstery kits and more. For 2017, they had a plan to fill their booth with Tri-Fives, one of which you see here, owned by Meghann Hocking and Chad Price. The gorgeous Golden Yellow ’56 came about as a result of a family discussion held at a barbecue approximately eight months before the SEMA show; a healthy stretch of time by most standards, but a blink of the eye when it comes to the typical SEMA build.

Now, you may be wondering who Meghann and Chad are. It just so happens that Meghann’s stepdad is Teo Zoetemelk, the Tooling Manager for TMI Products. “Teo works with me to develop all of the cool parts that TMI creates. Basically, I come up with the idea and he makes it happen,” says Larry Ashley, TMI’s Marketing and R&D Director.

With the Tri-Five plan hatched, Teo discovered that one of TMI’s welders had a ’56 two-door post car for sale. When the idea of building a car came up at the family gathering, Meghann said to Teo, “You look so sad because you’re not building anything. Let’s get it!” By that weekend they had purchased the car, which wasn’t more than a shell with boxes of parts and half the trim duct-taped together, according to Teo.

One step was already complete, though; the frame had been powdercoated. They were able to take the body off and hook it to a rotisserie and finish patching the floor, seal all of the seams, and undercoat it with POR-15. “There was a lot missing. Countless hours were spent going through catalogs and calling junkyards trying to find the missing pieces. Later, we would find out that the car had not been registered since 1983. It changed hands four times before we got it,” Teo says.

One of the things that typically occur with SEMA stars like this car is that they garner a lot of aftermarket support. The big players in the industry will gather together and all support big projects, which are expected to get a lot of press exposure. As you can see from this article, the strategy simply works.

With the solid frame in place, one of RideTech’s four-link airbag setups was installed, with a front suspension system, brakes, and power steering all delivered by Classic Performance Products (CPP), one of the largest suppliers of Tri-Five parts.

One of the difficult choices came when it was time to work out an engine program, and ultimately an LS engine and transmission were sourced from a Camaro. The engine was subsequently worked over by Matt Berglin of Bergers Custom Motors, who set the 11.0:1-compression bullet up with one of FiTech’s Ultimate LS fuel-injection systems. The engine was subsequently installed by Chip Cellier of Chip’s Performance Tuning.

Performance Distributors delivered a set of their Sultans of Spark coil packs, an Injen cold-air intake was installed, and CFR Performance’s ADS serpentine-belt accessory drive system was set in place, along with a pair of the company’s sweet valve covers. CPP also delivered a box filled with a steering box, headers, and engine mounts designed to work with the LS engine in the Tri-Five chassis.

The transmission from the same Camaro—a 4L60E—was built up by Ralph Ball and treated to a shift kit and Q-Ball floor shifter from Gennie Shifters, while a three-row radiator from Champion Radiators was installed to help keep the engine cool in the cavernous engine bay.

But the car wasn’t filled with brand-new items. In fact, Chad sourced a rearend from a four-wheel-drive Blazer, which offered a limited-slip differential and disc brakes. Since the car was assembled from the ground up, a decision was made to have Joel and Fred from JH Restorations install one of Painless Performance Products’ wiring kits for simplicity’s sake. They dropped the hammer down and accomplished the whole job in just two days.

Once the car was complete, the body was mounted, and the panels were ready to be covered in color. The family thought it would be smooth sailing. Boy, were they wrong. “Because we were on a deadline, the paint was probably the most stressful thing. The first color choice did not look good and the SEMA deadline was fast approaching. So back to looking at paint swatches. Choosing paint takes time, so definitely allow time,” says Meghann.

“Off it went to Johnny’s Auto Color and Body Works. We picked a gold color from paint chips. The first test shot Johnny did looked like a corndog. Others described it looking like baby shit. It was awful. Back to the drawing board. We ended up doing a custom mix to achieve the look we were after,” says Teo.

After the paint process was complete, they enlisted David Lobos to come in and lay the subtle, classy pinstripes down. His handiwork can be seen on the intake, the rear quarters above the taillights, and in other places on the car. Dick of D&L Custom Metal Finishing put his 50 years of experience into perfecting the chrome, which was installed. Additional assembly help and technical advice came from Robert Anderson, Hank Zoetemelk, and Fred Gaston.

One last stumbling block came when the glass was delivered. “We preordered the glass. After opening the boxes we realized I ordered a green-tinted glass, definitely not the color you want on a gold car. We had to scramble to find replacement glass. While at TMI we had the glass installed by Miguel the glass guy,” Teo explains.

In keeping with the sanitary exterior appearance, a set of US Mags’ Plain Jane polished chrome wheels ride on 18-inch front and 19-inch rear Continental rubber.

Remember where we mentioned TMI Products back in the beginning of the article? Well, Teo put his talents to work when it came to designing the interior of the car, as the final step before the car was shipped off to SEMA, where it became one of the stars of the show.

The interior wears TMI’s Pro Series low back front seats and Sport rear seats with waterfall console, finished in luscious cream and tan hues, which complement each other so well. TMI’s AR Sport Panels adorn the doors, the company’s German square weave carpet sits atop the floorpan, and a Sport Console sits between the front seats. Dakota Digital HDX instruments take their place in front of the driver, while TMI’s Sport Dash Pad and molded one-piece headliner finish the interior off perfectly.

Teo’s experience was undoubtedly critical during the build process, and at the end, he finished the project off with one of his own custom touches. “Does every car need a name? Maybe not, but my builds do, and it was Meghann’s car. It had to be something special and I came up with the name Megsled. I asked my buddy Craig from Black Parrot Designs to come up with a Chevy script font of Megsled. Artistic Iron did the cutout and it matched the Chevy script perfectly,” he says.

“All in all, Megsled is gorgeous. She is just as beautiful underneath as she is on top. Everyone involved is proud of the work we did. It’s a family car that Meghann and Chad will enjoy for years.” And that enjoyment started on one of their test runs ... when they ran out of gas. “The amount of attention we got was overwhelming,” she says. And rightfully so.