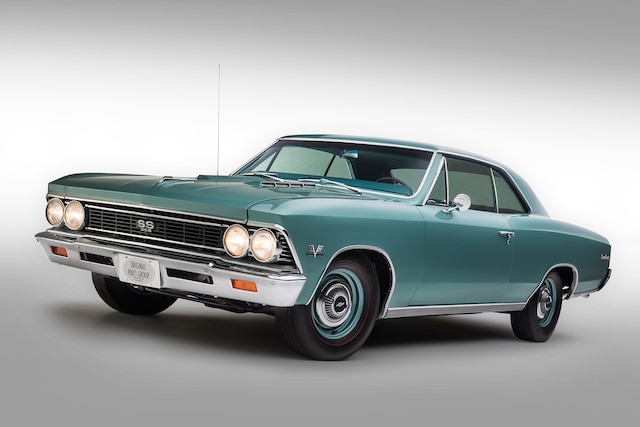 That old expression that a car is only original once is true, but it doesn’t necessarily apply to all cars. It does, for example, apply to a car such as a Studebaker Lark, Edsel Ranger, or a Rambler American where restoration parts are impossible to find, but when the subject vehicle is a 1964-72 Chevelle, one’s dealing with a car that can be brought back to look better than original.

A case in point the is 1966 Super Sport 396 Original Parts Group Incorporated commissioned for the 2007 SEMA Show in Las Vegas to showcase the Seal Beach, California, company’s product line. The ball started rolling when a lady in San Diego called and said she had a 1966 Chevelle SS396 she’d like to sell.

It was more than a dozen years ago when OPGI’s Assistant Sales Manager James Ferguson drove south to San Diego and checked out the car. It was indeed a 138 car—a real SS—but not one panel was straight, and it had rust damage everywhere these cars like to rust. The lower sill of the rear window rusted out, and that allowed rainwater to enter the trunk, which then rusted out the trunk floor. James offered the lady $2,400 cash and she quickly accepted.

The first stop was JH Restorations & Customs in Riverside, California, where shop owner Joel Hoffman blew the SS396 all the way down to the bare frame and looked to the OPGI catalog for new replacement parts. The frame was media-blasted, painted semi-gloss black, and restored with a new chassis and suspension parts, ball joints, bushings, and body mounts. In mid-1965, when the Malibu SS 396 was built in a limited number of 200 cars, its “Big Brakes” were 11.5-inch Impala drum brakes. In 1966, Malibu was dropped from the name and the SS396 hit the showroom floors with dinky 9.5-inch drum brakes.

The front brakes on OPGI’s 1966 SS396 are still the original drums but, interestingly, if you Google OPGI 1966 Chevelle disc brakes, 58 items come up that OPGI sells to convert 1964-66 Chevelles to disc. I drove OPGI’s 1966 SS396 from Seal Beach to the Motor Trend Group photo studio in El Segundo, California, and the car is truly a time warp. It appears and drives like a brand-new 1966 SS396, and that’s pretty good because its been restored for more than 10 years, proving the quality of its reproduction parts.

Any paintjob can look great right after it was completed, but add years to the mix and flaws, blemishes, and even rust holes can appear. Intense scrutiny confirms JH Restorations & Customs performed all the right steps to ensure the bodywork and paint prep would last. Inattention to doing the job right as simple as air compressor oil leeching into the air supply during any stage while the car is being primed and painted can appear later as blemishes in the paint.

From JH Restorations & Customs, OPGI’s 1966 SS396 went to Doug Starbuck’s Starside Design in Riverside for hours and hours of final prep, gapping the hood, doors and trunk, and then paint. It was a vast improvement over a GM original Magic Mirror acrylic lacquer single stage finish. Starbuck sprayed two-stage PPG urethane first in Artesian Turquoise followed with a clearcoat. Afterward, color sanding and polishing completed a paintjob that after 12 years still looks like new.

Every last bit of exterior trim, emblems, taillight lens, and bezels, including up the grille and bumpers, are licensed GM restoration parts sourced from OPGI’s catalog. Which is inspiring to know the company got a customer’s eye view of what customers experience when they restore a car.

Under the hood and in the transmission tunnel restomod, improvements are nearly impossible to detect. The only thing that gives away that a 200R4 four-speed automatic with overdrive has supplanted the original two-speed aluminum Powerglide transmission is the four-speed shift indicator on the console-mounted floor shift. Other than a 375hp 396 sticker on the chrome air cleaner lid, there’s not a much else to warn a 427 with a hot cam has been dropped in place of the 1966’s original 396.

Beyond this 1966 SS396’s role as a great example to illustrate reproduction parts can replace GM issued parts and be undetected, it proves one can start with the rustiest, most incomplete Chevelle they can find and build a car that looks like an unmolested cherry.