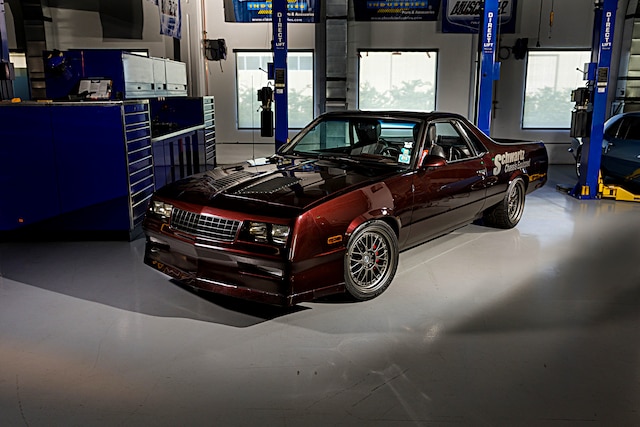 The El Camino is the antithesis of “work in the front, party in the back”—especially in its later years. With a sporty front end and functional truck bed in the rear, it was the answer to a question not many people asked. But, like so many misunderstood personalities of eras past, it faded away only to be longed for and revered in its absence.

For the team of Dan and Josh Howe and Schwartz Performance, the El Camino was the perfect canvas for the corner-carving Pro Touring build they craved. And, while many would consider it the underdog, at the 2017 Classic Industries Super Chevy Muscle Car Challenge presented by Falken Tires, this unlikely steed proved its mettle.

The El Camino started life as a 305ci, automatic with a bench seat—more utilitarian than useful on a racetrack—but that all changed when it came into the Howe’s possession. “What really got the ball rolling was talking to Jeff Smith [then Senior Staff Editor at Car Craft magazine] at the 2012 Optima Invitational in Pahrump, Nevada,” said Howe. “He asked me what I was going to follow up our Monte Carlo build with. Jeff Schwartz chimed in that he’d give me the same deal on the chassis as the first time [the Monte Carlo] and that got the ball rolling.”

While an El Camino may seem to have a disadvantage in the handling department. It was a favorite of Howe’s son Josh. “My son always liked El Caminos, so that’s what we decided we were going to build. I probably looked for a year before we came up with the car. I found it locally with 83,000 miles on the clock. It was a two-owner car and pretty clean.”

The build took two years from start to finish and was a team effort between the father/son duo. “My son did the bodywork and the paintwork on the car [the original 1986 El Camino Dark Red Metallic the car was born with] and Jeff Schwartz [of Schwartz Performance] was instrumental on the suspension,” said Howe.

Without a doubt, the most significant upgrade on the car is a Schwartz Performance G-Machine chassis that replaces the original and outdated unit with a bolt-in one that is 100 pounds lighter, but with increased torsional stiffness. It features rack-and-pinion steering, double A-arm suspension, and a triangulated four-link rearend with revised geometry. The chassis also features significant clearance for larger tires, allowing the car to fit a 275mm Falken Azenis tire in the front and up to a 355mm tire in the rear, though the rear is currently shod with 315mm Falken Azenis rubber. The wheels are XXR 18x8.5 front and 18x12 rear, though Weldcraft modified them from their original 10-inch widths. Baer 6P calipers and 14-inch rotors at all four corners handle the braking duties.

“Dan’s El Camino was the first chassis we did for the G-body El Camino,” said Jeff Schwartz. “Now we offer that as one of our production chassis for folks to buy. We use longer shocks than anyone in the industry, which gives you the ability to have a lower ride height but also have lots of suspension travel and a great ride quality. Our upper control arms have needle bearings in them and all the other joints have Teflon-lined spherical rod ends. Our goal is smooth, bind-free operation.”

The wheezy 305ci small-block Chevy is long gone, and the El Camino has been upgraded in a big way with an LS426 engine, assembled by Jesse Riggle at West Bend Dyno Tuning.

The new engine started life as a 364-cubic-inch LQ4 and has been bored and stroked to 426 ci through the use of a 4.065-inch bore and 4.100-inch stroke crankshaft. A set of forged H-beam connecting rods combines with a set of 10.0:1 JE pistons, Stage 3 hand-ported 317 casting heads, and a Comp camshaft to pound out a whopping 513 rear-wheel horsepower and 495 lb-ft of torque on the West Bend dyno. “These guys are amazing at what they do and I can’t thank them enough. The base program they supplied fired the powerplant on the first turn of the key, and it idled at 900 rpm,” says Howe. A harness from PSI Conversions helped the new LS engine install and wire easily.

Behind the new, more potent powerplant is a TREMEC Magnum six-speed transmission, sourced from Bowler Transmissions, who also supplied the shifter. An LS7 clutch and flywheel help transfer the massive power to the Moser 9-inch rear axle with 3.50 gears and an Eaton Truetrac limited-slip differential.

The El Camino sees plenty of street and track miles. A regular competitor at Optima Ultimate Street Car Association events and Sports Car Club of America (SCCA) races, it gets its share of abuse, but it’s also a regular at events like the Car Craft Summer Nationals and, hopefully, a Super Chevy Show or two (hint, hint). Most recently, it hit the tarmac at Auto Club Speedway in Fontana, California, where it proved to be anything but a slouch.

This 1968 El Camino Will Knock Your Socks Off

El Caminos are ripe rides for a nice Pro Touring-style restomod, and this 1968 El Camino is a perfect template on how to do one right.

This 1968 El Camino sat in pieces for 25 years before its rescue. The team at TMI Products worked with many parts suppliers to finish it in just six months.