A blown 1968 Camaro that refuses to follow the crowd

Undertaking a SEMA build is a challenge of perseverance, but Tim and Pete Quintin pulled it off with this slick ’68 Camaro 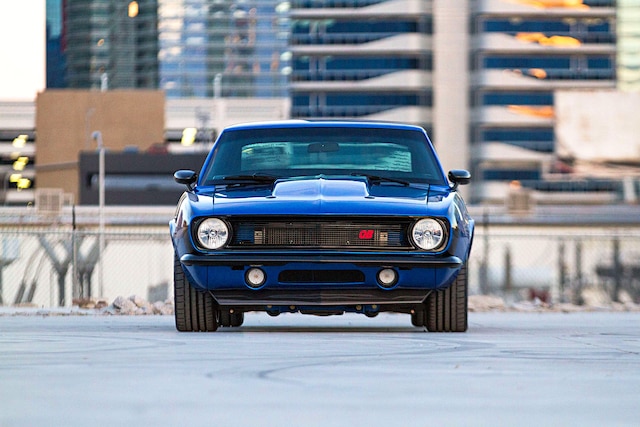 As a custom-car builder, having your work displayed at the annual SEMA show is perhaps the pinnacle of recognition, as there are only so many cars that get invited to the annual smorgasbord of automotive excess, and only a select few get to star in the Fesler Built booth, and then be pulled off to the side to star in a Super Chevy car feature.

So when first-time SEMA builders Tim and Pete Quintin decided to build a SEMA car, they enlisted their team at Quintin Bros. Auto & Performance in Williston, Vermont, and started laying pen to paper to determine what it would take to make it happen. The end result is far from the original plan, but we think you’ll find the journey worth the time.

“We are a local shop and decided we really wanted to do this for the future of the business,” says Tim. A plan was hatched, Tim and Cole Quintin drove to Ohio and picked up a stripped 1967 Camaro and brought it back to the shop, and then the team realized that there wasn’t nearly enough time to turn that car into what they envisioned. With the build deadline approaching far more quickly than they realized, they shelved the idea of building up that car, paid the piper, and shelled out $14,000 to pick up a brand-new 1968 Camaro body from Dynacorn.

“Our original budget of $70,000 was thrown out the window as costs exceeded $140,000 in just parts before any labor,” says Tim. You can imagine the serious pain that was about to penetrate the company bank account. But that didn’t slow them down; instead, they stuck with it and developed the serious piece of machinery seen here, which drew together some of the finest names in the automotive aftermarket to collaborate on this exquisite muscle car.

With the clean and mean Dynacorn body up top, the decision was made to use a full Roadster Shop SPEC chassis underneath. As you’ve probably seen in these pages before, the Roadster Shop’s equipment is nicely detailed and offers full performance upgrades over original-equipment ’60s-era Camaro gear. The frame is fully smoothed and finished in the same hue as the body, while all of the suspension components wear semi-gloss black for ease of maintenance.

The underpinnings of the car were completely fresh and the body was all new so it only made sense to equip the driveline with modern pieces, as well. To that end, a 6.2-liter LS3 crate engine was ordered from Chevrolet Performance, but Chris Quintin and Brady LaRock immediately tore into it, dropping in one of Texas Speed’s Lope cams and new TS pushrods. On top of the engine, a Holley Hi-Ram intake manifold and fuel rails were installed, and then the star of the show—one of ProCharger’s D-1X superchargers, complete with Stage 2 intercooler and bypass valve—was set into place, with 11 psi of boost pressure exiting the blower’s volute. The result is approximately 800 horsepower. Increased horsepower requires an increased appetite for fuel, and Rick’s Tanks got the call for one of their stainless-steel tanks to go with a pair of in-tank fuel pumps to ensure adequate supply. MSD wires and stainless-steel Roadster Shop Ultimate 1 7/8-inch headers round out the engine compartment and performance mods under hood. A custom stainless-steel exhaust was fabricated in-house, with a 3-inch polished Black Widow X-pipe leading into 3-inch WidowMaker mufflers to complete the aural symphony.

With SEMA as the goal, the engine couldn’t just perform well—it had to look spectacular, too. So they upgraded the valve covers with a set of TruCarbon carbon-fiber units, dropped a Holley oil pan in place, and continued the dark theme with a black-hued aluminum radiator from Afco Racing and a mini alternator from Powermaster. Restomod Air’s Bantam II Ultra Compact HVAC system—complete with Bluetooth connectivity—keeps the cabin’s temperature just right, without a visible control panel in the interior. The intake manifold has been smoothed out, black T-bolt clamps were used on the pipe couplers, and many other little custom touches make this setup one of a kind.

To back up the power, yet keep the car totally happy on the street, one of B&M’s 4L80E transmissions was chosen, with a 2,500-stall torque converter from Hughes Performance. The four-speed transmission was then customized by the Quintin Brothers team for maximum performance, and it’s controlled by a modified Winters shifter.

A heavy-duty custom driveshaft was required to mate the 4L80E with the Roadster Shop’s 9-inch Ford housing with 3.70:1 gears and a limited-slip differential. The housing is suspended by a Roadster Shop custom four-link. Afco double-adjustable shocks and springs were used to set the ride height.

Baer Pro + brakes are used at all four corners; featuring the company’s 6P six-piston calipers and 14-inch, two-piece drilled and slotted rotors, and their impressive stopping capabilities are well-documented. Up front, Wilwood Pro spindles combine with Roadster Shop tubular A-arms and a set of Afco Racing double-adjustable shocks and Afco springs to set the ride height.

No custom-built car like this is complete without three things: nasty rolling stock, a killer interior, and an audio system fit to rock the world.

With that in mind, Mark at Forgeline got a call to help the QB team choose wheels, and he came through with a set of the company’s DE3C wheels, finished in custom Transparent Red and complete with customized Quintin Brothers center caps. In the front, 19x9.5 rollers wear 245/45R19 Michelin Pilot Super Sport tires, while the monster 20x12 rear wheels are wrapped in 335/30R20 Pilot Super Sports.

TMI Sport XR seats are covered in black vinyl with black suede inserts and red stitching, Fesler Built door panels match the seats, and an ACC ultra-plush Essex carpet is underfoot. A sixth-gen Camaro ZL1 center console was completely modified in-house at Quintin Brothers, and upholstery whiz Ron Levine at The Recovery Room helped it to all come together. A Racepak IQ3 Street Dash sits in front of the driver, while car control comes via one of Billet Specialties’ Formula steering wheels.

A full complement of JL Audio gear, including the company’s TWK88 digital signal processor, XD-7005V2 amplifier, 6.5-inch front component speakers, 6x9-inch rear coaxial speakers, and a 10-inch W3 subwoofer housed in a custom-built cabinet knock the tunes out of the park. The whole works is controlled by an iPad Mini 4 mounted in the dash and controlled through Bluetooth. Master wiring guy and audio specialist Mike Desrochers and Brady LaRock collaborated on the install using Teflon-coated wiring from Stinger.

Externally, the modifications continued, bodywork, graphics, and paint completed by Ryan and Garrett at RPM Motorcars, with RM base-clear World Rally Blue applied to the surface of the Dynacorn body. The billet grille—including its custom emblem—was built at Quintin Brothers, and both front and rear bumpers were custom-shaved and tucked, then painted to match the interior accents and stripe. A modified GM steel cowl hood was sliced and diced to clear the Hi-Ram intake before paint was applied. All powdercoating for every item on the car was handled by Bob at Vermont Powder Coating.

This entire build was completed in seven months before it debuted at the 2017 SEMA Show, although planning commenced long before then. No build like this happens without a long list of people to thank other than the aforementioned. Cole Quintin (designer and social media guy at QB), Josh Clark, Chris and Carrie Fesler of Fesler Built, car builders Chris Quintin, Shawn Quintin, Chris Companion, and Andrew Hill, who helped the whole project come together with their fabrication and build talents, Mark at the Roadster Shop, Matt at Anvil Auto, Steven Hummell, Cary Pangrac of ProCharger, and rendering artist Matt Bernal, who went through nearly a dozen renderings before the QB team settled on the final design.

“We all had a blast and there were way too many fun moments with this build. I have to say the most fun we had was seeing it all pay off in Vegas. Those two weeks in Vegas with 16 friends was nothing like we have ever experienced,” says Tim Quintin.