’55 Revival: As a result of a growing family and a need to haul them around, Travis Endy resurrected this 1955 Chevy Nomad for that task 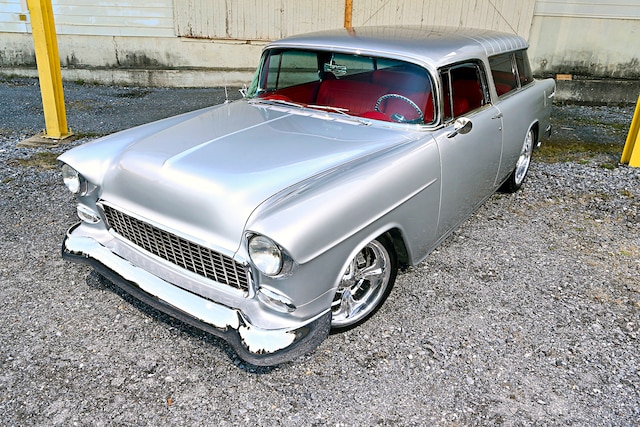 When Travis Endy set out to build his first car, a 1930 Ford street rod, he was 18 years old, fresh out of high school, and filled with ambition. All through his youth, his father, Jim, who is also a hard-core car guy instilled much of that automotive enthusiasm in him. With that being said, there are some things that can only come with maturity and a certain amount of lived experiences. At that age, it is not uncommon for individuals to only think of themselves and make short-term decisions. That changes to some degree when wedding bells ring. When Travis married his girlfriend Kathleen that was a new threshold he crossed. As car things went, that threshold didn’t have any impact on his enjoyment with the ’30 Ford until Ashley and Chad arrived. That’s right ... twins.

Faced with a growing family, he quickly became aware that the Ford had reached its limitations and wasn’t going to cut it anymore as a family friendly ride. The desire to share his automotive enjoyment with his wife and children became a priority, so the need for something with a back seat was suddenly added to the equation going forward. As a result, this set the wheels in motion to find another play vehicle. He was fond of ’49 Mercs and ’55 Nomads, so those two choices were at the top of his wish list. However, finding decent examples of these cars at a reasonable price can be a challenge. That difficulty became a reality when his buddy Bob Strunk found a ’55 Nomad for him. “That very night Bob took my dad and I to see it,” he recalls. “I bought it right then and there for $5,000.” What he bought was a rusty shell that had been sitting for 35 years. The inspection sticker on the windshield dated back to 1972 and the engine and transmission were a distant memory. Travis also adds, “The bottom six inches of the body was rusted and you could put your feet through the floor and touch the ground, and someone had taken a sledge hammer to the firewall to fit a big-block. It was all there, but everything was in bad shape.” He believes that at one point in its life, the Nomad saw some track duty before it was put out to pasture.

In 2006, the Nomad was towed home and parked in his garage. The rebuild was going to be a home brewed three-man operation going forward. From the outset, one thing was clear, rust repair was going to be the biggest hurdle. However, since much of the car came in boxes, disassembly to get at that rust was relatively easy. Travis decided that getting the project in motion required clean sheetmetal—what was left of it—so they mediablasted the car in his driveway before anything else was done or money spent. Beyond the shell, they also took into account the condition of the frame and came to the conclusion that it was past its prime.

When the body was ready to have new metal grafted onto it, chasing down N.O.S. panels wasn’t in the budget, so he obtained a number of aftermarket pieces to get all the existing sheetmetal back in shape. He didn’t have to travel far for those items since he had East Coast Chevy in Doylestown, Pennsylvania, as the source for his parts needs. Nomad-specific repair panels weren’t plentiful at the time so he relied heavily on coupe sheetmetal to get the job done. Once he had the needed hardware in hand, the trio started with the interior by replacing the rusted-out floor and banged-up firewall. With fresh metal installed in the interior, the exterior followed. All the rotted sections were cut out and patch panels trimmed from the repro pieces installed.

Figuring out a solution for the existing frame was also on the agenda; however, since there wasn’t much there to actually sort out as it was too far gone, he ordered a premium replacement frame assembly from Fat Man Fabrications. At the front, their assemblies include 2-inch drop spindles, upper and lower tubular A-arms, power rack-and-pinion, and adjustable QA1 600-pound coilovers. At the back, it comes with their Pro-Link four-link suspension, which includes adjustable QA1 175/350 coilovers supporting a Ford 9-inch rear with a 3.70 Trac-Lok gearset. He also opted for their Wilwood brake upgrade that includes four-piston calipers and 12-inch drilled and slotted rotors at all four corners. Overall, this combination would give the Nomad a 4-inch drop in ride height. This purchase came about when he was still sorting out the metalwork, but it never made it onto the car as that work was taking place. The old frame did come in handy as a frame buck and makeshift rotisserie until the body was completed.

That completion date was put on hold for a number of years. Travis, his dad, and Bob were spending three to four evenings per week working on the car. That lasted for about four years but it reached a point that Travis was tapped out on cash, so the Nomad was parked. They had managed to get the body to the point it was solid and ready for the finish bodywork.

Seeing his children get older sparked a renewed interest in getting the Nomad on the road, so in 2013 they were back at it again in the garage. They picked up where they had left off by taking the body to the paint stage. The frame was ready to install but the drivetrain was still missing. On that front, Travis decided to mix things up. He wanted a modern manual gearbox, but was adamant in keeping it old-school with a carbureted engine, so his choice for shifting duties came down to a TREMEC TKO five-speed mated to a Chevrolet Performance ZZ4 350 crate engine. Rated at 355 horses and 405 lb-ft of torque, it provided ample amounts of power—and it came with a warranty.

By the end of 2016, the Nomad was ready for paint. Bob had tweaked the body by removing the side trim, smoothed out the hood, and nosed the eyebrows. Once that was wrapped up he was ready to lay down some color, so it was transported to his house where he would spray the Axalta Cromax Chromabase Ingot Silver Metallic basecoat/clearcoat paint. Once completed, and back home again, they finished up the rolling chassis with the installation of the exhaust system and fuel tank. He added a set of Doug’s headers to push the spent gases downstream via a set of 2.5-inch stainless pipes mated to a pair of Flowmaster Super 44 Series Delta Flow mufflers and a custom stainless fuel tank from Rick’s Tanks in El Paso, Texas. It was only at that point that the new frame was definitively parked under the body. That milestone signaled a shift to the interior and the installation of all the external trim that needed to be hung. On the outside, parts like the grille and the front and rear bumpers were ordered from Danchuk. Anything that was Nomad specific and not available was refurbished and either polished or re-plated.

That was also the course taken with the interior trim. Luckily, when Travis bought the car, all the Nomad-specific pieces were still in place but in need of repair. The rest of the interior also needed to be completely replaced. That task was handed over to the crew at Dave’s Interior Restorations in Emmaus, Pennsylvania. Understated simplicity was the plan and red was the flavor that Travis opted for, so they started with the existing seats and reupholstered them in red leather. They also crafted new custom interior panels that were covered in red vinyl, a new red headliner, and a fresh set of in-house stitched red hook and loop carpets. The dashboard was also bathed in red and received a full complement of AutoMeter gauges along with the addition of a red-leather wrapped billet steering wheel. Handling the cabin cooling duties was left to a Vintage Air unit, with a Hurst shifter tackling the shifting duties.

The last piece of the Nomad puzzle came down to rolling stock. On a ride like this that choice can either make it or break it. With the overall 4-inch drop, nailing it was crucial. Thanks to Billet Specialties Dagger rims measuring 18x8 up front and 20x10 at the rear, all neatly wrapped in BFGoodrich G-Force Sport Comp 2 rubber measuring 245/40ZR18s up front and 275/40ZR20s at the rear, that killer stance was achieved.

With the car all buttoned up and ready for some shows, Travis took it on its maiden outing in 2017 to the Wheels of Time August Rod Run in Macungie, Pennsylvania. It was a crowd favorite and the best part of that weekend was the entire family was able to ride along. “I regret taking 10 years to build the car,” he notes. “Chad and Ashley are 12 now and we missed out on traveling to shows as a family all those years.” While it took the better part of a decade to complete, we think the end result was well worth the wait.

This gorgeous ZZ502-powered 1955 Chevrolet Nomad was well worth the two years it took to build. Check out all the photos and mods here!

Sandra Jameson rides again in her 1955 Chevrolet Nomad after her husband sold her previous one. Check out the hot rod mods she made to this Tri-Five!

Over the last 60 years, Dooley Cameron’s 695hp 1955 Chevrolet Nomad has continually evolved with the times to stomp the competition.

Scott Kisner bought this 1955 Chevy Nomad in good shape but a few problems later, this modern power has been wrapped in classic metal.

Check out this 1955 Chevrolet Nomad that has a ZZ 383 engine rated at 425hp and a ProCharger supercharger system. Read more only at www.chevyhiperformance.com, the official website for Chevy High Performance Magazine!

Swapping a chassis for any Chevy project can be a rough one without the proper tools and knowledge. Follow along as we swap a new chassis on a Tri-Five Chevy. Only at www.superchevy.com, the official website for Super Chevy Magazine.

Check out this 1955 Chevrolet Nomad that features 406 engine and PPG Hot Hues Winter Mint Green paint. Take a look only at www.chevyhiperformance.com, the official website for Chevy High Performance Magazine!