Inside the Buildup of One of the Most Memorable Match Bash Chevrolets Ever Built: The Steve Bovan/Blair’s Speed Shop Blown 1965 Chevy II

From the Archives: Match Bash Deuce 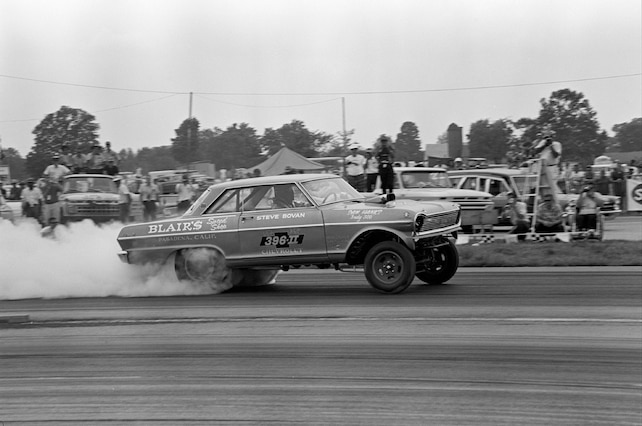 Back in 1964, the term Funny Car wasn’t capitalized and was usually surrounded by quote marks, because the cars those words described had altered wheelbases that made them look “funny.” Steve Bovan from Blair’s Speed Shop in Pasadena, California, built one of the most memorable—and successful—early funny cars, with plans to match race it around the country.

Bovan and fellow Blair’s employee Mike Hoag built the car using a 1965 Chevy II and one of, if not the, first 396 big-block Chevy engines on the West Coast. Both the car and engine were supplied by Indy racer Sam Hanks, a friend of Steve and Don Blair’s. Car Craft’s Bud Lang documented the Deuce’s buildup in a story called “The Circuit Rider” in the January 1966 issue.

“The first thing Steve did was to completely strip the Chevy of all running gear including front and rear ends, interior equipment, engine and trans, fenders, doors, grille, etc.,” Lang wrote. “When finished only the body shell remained.”

In place of the Deuce’s front subframe, Hoag fabricated his own from steel tube, braced by down bars tied into the firewall. That cradle, which would hold the 396, was further supported by two additional tubes that ran nearly the entire length of the car “to absorb some of the shock and force imparted to the body by hard acceleration.”

A stout ’57 Pontiac rearend hung on coil springs and ’50 Olds trailing arms, and was damped by Monroe 50/50 shocks. In front, a chrome-moly straight-axle with ’40 Ford spindles was “cared for” by Morris Minor torsion bars and Monroe 90/10 shocks. Airheart disc brakes were mounted at all corners.

There’s no mention in the story of the 396 being bored or stroked, but the block was flycut and reliefs machined into the pistons to aid valve clearance. Bovan put stainless steel valves in the heads after they were ported, polished, and CC’ed by Tim’s Precision Engines, also based in Pasadena. Boxed steel rods linked the Forgedtrue pistons to the micropolished crank. The blower manifold was custom fabricated from aluminum plate by Jim Bishop. In the block was an Isky 550 cam, and Horsepower Engineering fabbed the engine’s headers.

Lang’s story ends with Bovan going on tour after shakedown runs at Fontana in August 1965 (where he shot photos of Bovan and the Blair’s crew tending to the car). A month later, Petersen’s Bob D’Olivo caught the Chevy II in action at the 1965 NHRA Indy Nationals, where in B/Fuel Dragster “best e.t. on 25 percent nitro, 75 percent methanol mix was 9.55, 150 speed,” wrote Lang. Some web research indicated Bovan tried several different transmissions after the original Pontiac box couldn’t live behind the big-block. Ultimately he installed an Art Carr automatic, and his best e.t. went to 9.29 at 160 mph.

» Read More
Get bigger tires under the back of your early Chevy II or Nova!

Although this 1966 Chevy Nova showed well at the 2010 Detroit Autorama, the 870hp Pro Street beast is more than your average show car.