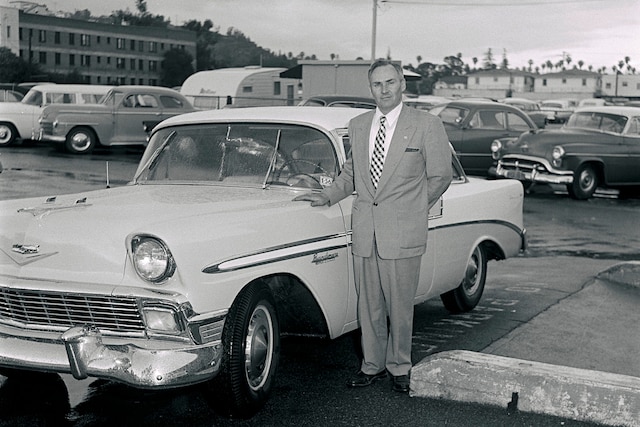 The man posing next to the plain-Jane ’56 Chevy Bel Air is John Bandimere. That would be the same John Bandimere who, about a year after these photos were taken in April 1956, chose a parcel of land on the west side of Denver that he would transform into a place where local hot shots—including his own son, John Jr.—could race safely off the streets. “Thunder Mountain” still bears the name of its founder, and Bandimere Speedway is still very much a going concern six decades later.

Bandimere Senior was an avid racer himself, with a history of hot cars that reached back to the 1930s. To help make power in the Rockies’ thin air, he became an expert on supercharging and even put his name on a few blower systems, now highly collectible rarities.

Bandimere’s story about his Bel Air, “Mile-High Windmill,” ran in the February 1957 issue of Hot Rod. “Recognizing the performance and roadability of the ’56 Chevrolet, I decided that mine was well worth the trouble of an all-out supercharger installation, especially in consideration of the high altitude and resulting rare atmosphere of the Denver area.” What would make this project even more interesting, in his eyes, was the fact that “the engine itself was to retain stock Chev brands from the blower down.”

“Redomed” Chevy truck cylinder heads lowered the compression to 6.5:1, and he used a Corvette cam, lifters and valvesprings, and exhaust manifolds, the latter fitted to exhaust pipes that ended at Buick mufflers.

Bandimere fabricated an aluminum adapter plate to fit the 3-71 GMC supercharger on top of the engine, while two Carter side-draft carburetors were installed on a “special manifold on the intake side of the supercharger, using the present foot throttle for operation.”

This is where things get interesting.

Bandimere made a point of calling out the “present foot throttle” because the Chevy mill would have two. “A left foot throttle was installed to operate the fuel injection system, consisting of a Hilborn metering valve and my own arrangement of eight fuel-injection nozzles in the intake manifold, and one nozzle in the intake blower manifold. The methanol fuel pump is set to put out a maximum pressure of 28 pounds, which has to overcome a manifold pressure of 14 pounds to deliver the proper amount of fuel through the injection nozzles.”

Bandimere constructed a separate tank in the Chevy’s trunk to hold the methanol, and a switch in the cabin operated a solenoid that controlled the gas supply. “As a result, this combination carburetor and injection system can be quickly changed to one or the other from the dash.”

Bandimere admitted that “no clocked acceleration runs have been recorded as yet,” but “comparison tests with other high performance cars lead me to believe that I’ve a hundred in hand through the quarter mile.”