Scratching a 30-Year Itch With a 1959 Chevrolet Corvette

A missed opportunity no more 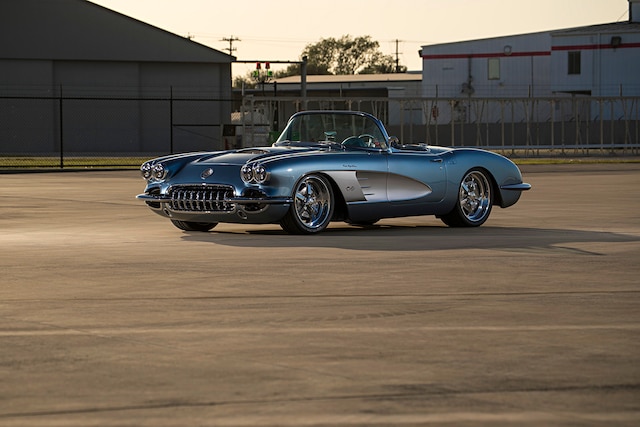 Life happens. Sometimes things work out in your favor and sometimes they don’t. Sometimes they work out in your favor but at the wrong time, which was just where David Fuller of Round Rock, Texas, found himself some 30 years ago. As a young man, he was right in the middle of starting a family. He and his wife, Sylvia, were married and pregnant with child number two when the best and worst thing happened—he had the chance to buy a ’57 Corvette. He wanted it so badly, but with his wife eight months into their second pregnancy he simply couldn’t justify it. “Family came first,” Fuller told us, so he regrettably passed the deal by and focused on more pressing responsibilities.

Back in the day, before his responsibilities as a family man, he had a huge love for cars. More specifically, he loved C1 Corvettes. In fact, the car he had the chance to buy back then was one he was working on with a friend before the friend tragically passed away. It wasn’t until almost three decades later that Fuller found himself in a position to buy (and build) a Corvette of his own. When it came time to find a project to work on, he knew a C1 was the only option.

It was right about that time Mecum Auctions came to Austin for the first time and Fuller decided to go check it out. As these things typically go, one thing led to another and he brought home a 1959 Corvette. With tuned port injection, a small-block 383, and a few other modifications, the car wasn’t a great candidate for restoration, but it was perfect for what Fuller had in mind. What he wanted to do was something along the lines of an LS swap and a modern chassis to make the Corvette a nice driver. This being his first rodeo—or at least first in a few decades—he really did his homework, reading everything he could find before diving into the project. He wanted to have everything planned out and accounted for so he didn’t get in over his head.

The longer the parts list got, the more hesitant Fuller became. He finally got to the point where the amount of money and resources needed to complete the project on his own was just too much. Fuller recalls deciding that, “If I’m going to spend this much money, I’m going to have it done by a professional.” Through his research, Fuller came across Brian Cruz and his shop Cruzer’s Customs in New Braunfels, Texas, which became the ’59 Corvette’s new home for the next two years.

Walking up to the car, the first thing you’ll notice is the subtle yet eye-catching Frost Blue Metallic paint with Inca Silver coves. Cruzer’s Customs achieved the rich look using two-stage base and clear coats from Spies Hecker by Axalta then added more refinement in the form of smoothed and reshaped bumpers chromed by Alamo Plating in Converse, Texas. The rest of the modifications made to the Corvette’s exterior start to make you wonder what’s hiding underneath. Take the quad exhaust tips for example—that’s not original, right? And the headlights—we’re pretty confident they didn’t have LEDs back in 1959. What you really notice though, are those 18-inch front and 19-inch rear Budnik Muroc III wheels wrapped in Nitto Invo 245/40R18 and 285/35R19 tires. Yes, you could technically get a set of those for your run-of-the-mill C1, but really you just wouldn’t.

So what is hiding underneath? The basis of the Corvette is a complete Roadster Shop Fast Track chassis, which took the place of the stock frame and suspension components. The chassis comes with adjustable Penske coilovers all around, delivering modern-day handling and ride quality. Wilwood six-piston calipers reside at all four corners, clamping down on 14-inch rotors and giving Fuller’s ’59 Corvette more than enough stopping power.

Fuller wouldn’t need all that stop if the car didn’t have some serious go. Under the hood Cruz stuck with Fuller’s original desire for a reliable and powerful LS, but with the “let’s take it one step further” mentality applied. Opening the hood of a classic Corvette and finding an LS crate engine might momentarily spark some interest at a local show, but it won’t hold attention like the engine bay Cruz had in mind—an LS376/480 topped by an Inglese Eight Stack EFI. To style-up the engine bay even more, Cruz fitted the LS with a Vintage Air Front Runner accessory drive and Evod Industries coil covers. The exhaust system is comprised of 1 7/8-inch stainless long-tubes from Ultimate Headers dumping into MagnaFlow 2 1/2-inch stainless pipes and mufflers then out those quad tips mentioned earlier.

Cruz and his guys paired the LS3 with a 4L70E four-speed automatic from GM sporting a 2,800-stall converter. With an aluminum driveshaft in between, the trans sends power to a Ford 9-inch from Currie. A 3.50:1 rear gearset and a limited-slip differential inside the 9-inch give Fuller a balance of performance and everyday driveability.

Gabriel and Son Upholstery in San Marcos, Texas, were given the task of classing-up the interior of Fuller’s ’59. They did so by covering just about everything in exterior-matching blue leather. The seats, supplied by Wise Guys, along with the door cards were given some grey suede accent patches to break up the blue leather. The seats hide a couple of modern creature comforts, including lumbar support and heated seat bottoms. Above the driver’s seat, the 14-inch Corvette Central steering wheel was also wrapped in matching blue leather, as were the center console and dashpad. Other modern conveniences include a Vintage Air climate-control system and RetroSound Bluetooth-controlled head unit and speakers.

Those “one step furthers” really added up. “What I liked most was all the attention it brought,” Fuller told us. “I always dreamed what it would be like to have a car worthy of bringing to a car show.” And, although he generally likes to be a behind-the-scenes type of guy, a little time in the limelight was, as he put it, “so much fun.”

While Fuller really-truly enjoyed his ’59, you know what they say—money talks. An acquaintance of his saw the car and had to have it. With a regretful tone in his voice, Fuller told us how it went down saying, “He made a very solid offer and I said, ‘Shoot, let’s do this thing.’” And that was that. So, as we write this, the car is moving on to a new life with a new owner. Luckily for Fuller, the couple years he got to enjoy it, topped off by a feature here in Vette magazine, means this ’59 Corvette will surely be engrained in his memory forever.