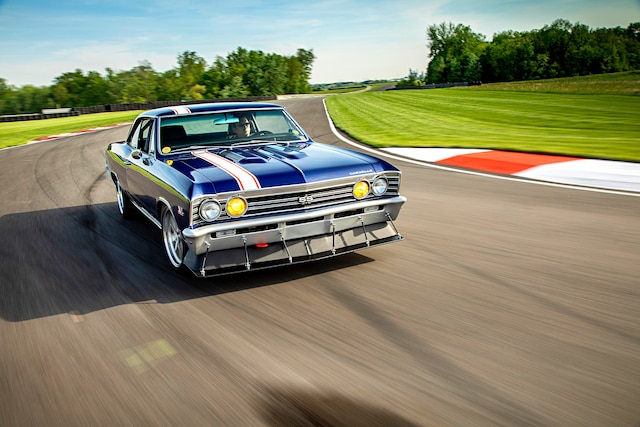 Taking the iconic lines of a first-generation Chevelle and infusing it with more than just an updated suspension and wheel/tire combination raises the bar and makes the difference in creating a car that stands out wherever you see it. It’s the design elements fused with extreme attention to detail that creates its own individual personality, making it memorable. For Eddy Guillu of Franklin Park, Illinois, the fire was lit deep inside him starting at young age thanks, in many ways, to the family business. There’s nothing cooler than being able to accompany your dad to work, especially since he owned the local auto parts store, which included a machine shop and garage. Growing up in that environment provided him the opportunity to watch the most radical hopped-up muscle cars blaze through the streets of downtown Chicago on a regular basis.

As the years passed he continued to work at the store, honing his skills and also fueling his passion for GM muscle cars. One day a customer walked in looking for a thermostat replacement for a 1967 Chevelle SS. The client had grown tired of the car and it didn’t take long before Eddy had worked out a deal to buy the car for $600 and the title to a Plymouth Horizon. It was a perfect exchange for both parties, and it wasn’t long till Eddy was wheeling the Chevelle through high school. It was a pretty solid Texas car, which raised a question since it was the exact color and model of one his dad sold years ago in the Houston area. Could it be the same car, fate bringing it back into town? We’ll never know.

Fortunately, not long after the high school years the car was retired and stored, never leaving his ownership. Pretty cool since it was an original Marina Blue 396ci, four-speed car. As the years passed it was finally time to resurrect the sleeping beast, this time with a vengeance. Having watched the Pro Touring world evolve it was obvious that the car would need to get an attitude adjustment with a low-slung stance and an injection of power for starters. If you are serious on the scene you’d have seen a myriad of notable cars being built at Hot Rod Chassis & Cycle (HRCC) in Addison, Illinois. Long known for traditional hot rods and customs focusing on 1964 and earlier cars, they also showcase their Skunkworks Racing Division, which exclusively works on race cars of any year. In business since 2004, they have turned out plenty of aggressive cars, including the Raybestos Brakes 1964 GTO-R, Craftsman Tools 1965 Mercury Comet-R, and the 1964 Plymouth “Violent” Valiant to name but a few. It wasn’t long till Eddy made plans to discuss the future of the Chevelle with Kevin Tully and Chad Hill at HRCC. Being a great friend of the shop, it was an awesome opportunity for the team to create something totally unique for him.

Wanting his car to stand out from the rest, they began to outline what it would take to add just the right amount of creative updates to the car by first working through a number of renderings to showcase the changes. Once the main details were agreed upon it was time to start the teardown. For a rock-solid foundation, a decision was made to retain the original frame since it was in such pristine condition. Once it was stripped and blasted clean it was time to stiffen it up with a boxing kit from ABC Performance. Out back, a Moser 9-inch rear with Trac-Loc was packed with 3.73 gears spinning matching 35-spline axles. It’s suspended in place by RideTech four-link StrongArms with matching Panhard bar and MuscleBar combined with their exclusive TQ-series coilover shocks with dual compression and rebound adjustment for precision-tuning as well as remote reservoirs to plant the power. For razor-sharp handling up front, RideTech’s upper and lower StrongArms link to their matching tall spindles along with TQ-series coilover shocks and front MuscleBar for the ultimate in cornering and overall stance.

If you’re planning on going fast you’d better have the right anchor to haul it to a stop. A Wilwood dual master pushes fluid through stainless lines to a set of Wilwood Aero6 big brakes at each corner featuring their six-piston radial mount calipers matched to their 15-inch SV-GT staggered directional-vane rotors for the ultimate in stopping capabilities. In linking it to the asphalt it was important to give the car a perfect ’60s-era racing look. A set of 18x8 front and 18x12 rear American Racing VN427 two-piece wheels fit the bill perfectly, especially when treated to custom champagne-painted centers coupled with vintage American Racing decals on the center caps. They wear Nitto NT05 Max Performance tires sized 245/40R18 front and 295-35ZR18 rear for plenty of grip on the street or track.

To be able to light the road on fire, Crate Engine Depot was contacted for a Chevrolet Performance 6.2L supercharged LSA crate V-8. Displacing 376 cubic inches, the engine delivers extraordinary performance throughout the rpm range with 9.1:1 compression generating 556 hp and 551 lb-ft of torque for plenty of neck-snapping power. A hydraulic roller cam sets the beat while high-flow aluminum L92-style port heads generate seamless power and EFI with a 1.9L supercharger with four-lobe high-twist rotors and a Z/28 intercooler breathing deep through a custom air duct topped with a K&N air cleaner to complete the package. Spent gasses dump through a set of Hedman Husler headers to a custom HRCC-fabbed NASCAR-style exhaust with Flowmaster Super 50-series mufflers exiting just ahead of the rear wheels. Cool details include a C&R Racing radiator with integrated oil and power steering cooling as well as a Powermaster alternator and starter, SPAL fan, and trunk-mounted Optima battery. It’s all good for 503 hp at 6,200 rpm when linked to a TREMEC Magnum six-speed trans from Hurst Driveline packed with a McLeod RST twin-disc clutch and flywheel along with a C&R Racing trans cooler. A driveshaft from Dynotech Engineering is the final link pushing the power.

Thankfully, the original Texas body was in solid shape after all the years making the restoration of the sheetmetal a breeze. Once the exterior was stripped, any minor issues were corrected while also metal finishing the body and setting the gaps. From there, a set of rear wheel tubs from ABC Performance were installed to accommodate the wider rear tire combination while also adding a RideTech TigerCage and installing a Fire-Trak fire suppression system. To bring the racy HRCC rendition to life and give the car a distinctive signature the team worked with VFN Fiberglass to develop a unique front air dam to work with their fiberglass bumper while also building the splitter. They continued on out back with even greater challenges in creating a fiberglass decklid that would incorporate an integrated spoiler to work not only with the decklid but to also flow with the tops of the quarter-panels. The idea was to make it look like it could have been originally designed by GM back in the day, and we think they nailed the look. Additional cool bits include a VFN fiberglass rear bumper and high/low outer headlights with inner fog lights.

To bring it all to life, the car was then brought to Vince Thornberry at The Paint Spot in Addison to make everything as straight as glass and prepare it for color. Vince laid down the vibe with a lustrous coating of Valspar 2007 Mitsubishi Maizen Blue to add plenty of allure to the body’s classic lines. HRCC went through plenty of renderings to get to the final decision of the racing stripe to grace the Chevelle since they wanted it to have the perfect ’60s-era racing look. For the final design they chose an offset location to lay down the Stone White and Chevy Orange accents. Remember, perfect execution is found in the details. The final icing came in the form of custom-crafted badges to grace the fenders based on the factory originals updated to reflect the new 376ci LSA V-8 residing under the hood. Once the concept was completed it was turned over to Billet Badges who hit a homerun on the details by making ’em real.

Inside, the car needed to reflect its newfound racing roots. Starting with the factory dash, it was treated to a custom HRCC unit fabbed from the original and a 1966 Chevelle dash, cut and re-formed into one gauge pod filled with dials from Stewart-Warner. This was to improve the driver’s overall vision of the gauges to monitor the cars vitals. HRCC worked with Stewart-Warner to develop a new vintage-styled Trans-Am tach in a color to make it stand out better for racing purposes. It’s all treated to a custom engine-turned panel to complete the look. A factory GM tilt column links to a 13.5-inch deep-dish steering wheel from Driven Motorsports while shifts fly through a Hurst stick. A wiring kit from Painless Performance links everything together. There’s plenty of cool thanks to a Vintage Air system accented by tunes from Sony combined with speakers from Polk Audio. For the ultimate in support, a pair of black leather Recaro seats with Simpson four-point harnesses accented by stock black side panels and matching loop carpet completes the business office.

Since debuting at SEMA in 2017 in the Stewart-Warner booth the car received Optima Batteries “Golden Ticket” award, allowing it to compete in the Optima Ultimate Street Car Invitational at Las Vegas Motor Speedway immediately after the show. It was a perfect way for the car to start its new life with Eddy behind the wheel. We can hardly wait to see the car in action on both the street and track.