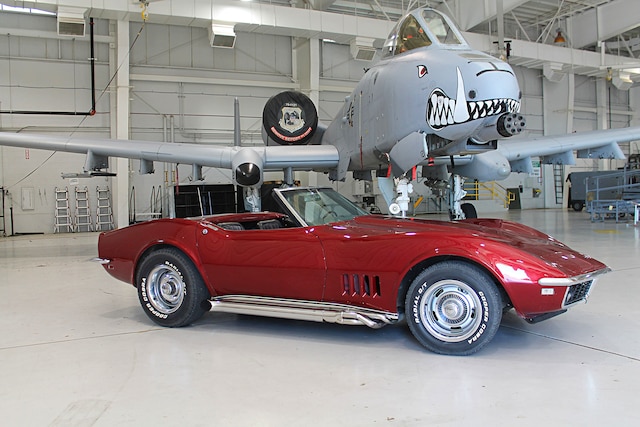 Corvettes and military pilots go together like apple pie and ice cream. When not piloting an A-10 Warthog out of Whiteman Air Force Base, Jimbo Macaulay is behind the wheel of his 1968 Corvette. Jimbo’s owned the Vette since 1985, the same year he got his wings. Over the years Jimbo has put the Vette through multiple self-learning builds. The current engine configuration is a 388 stroker with an all-forged rotating assembly. Other engine upgrades include AFR 195 heads, Lunati Voodoo cam, Edelbrock RPM Air-Gap manifold, and Holley HP Ultra carb. For a transmission, it has a close-ratio Muncie M21. All the gauges have been swapped out for electric AutoMeter dials. From the entire staff of Super Chevy, we thank you for your service, Jimbo.

A father and son project rekindled the love Dominick Vendetto, of Farmingville, New York, had for cars, leading to him buying his first love: a 1957 Chevrolet Bel Air. The ’57 four-door hardtop has a 283/Powerglide combo sending power to the stock rearend. The front and rear suspensions are stock, with the drum brakes being fed by a dual master cylinder. Covering those brakes are Cragar SS 15x6 wheels wearing 215/65R15 tires. Future plans include a 350 and custom seats and interior. Dominick and his son have cleaned and tuned up the ’57 so it’s ready for the local cruise nights and car shows.

We here at Super Chevy are always happy to see Chevys make a return visit after many years. The 1967 Camaro RS/SS 396 four-speed of Joe and Tina Halasz (City of Gardens, Victoria, British Columbia) is just as stunning today as it was when it first appeared in Super Chevy as part of show coverage way back in 1990. The Camaro has been restored twice, once from 1988-’89 and again in 1991 to better-than-new condition. The ’67 RS/SS 396 has been the recipient of numerous awards and trophies. The fact that Joe and Tina still have the original California black plates for the Camaro is just icing on the cake.

Corvette America shows us how they reproduce factory a C3 door panel for your Corvette.

Installing a solid state voltage regulator and new exterior lighting and wiring in a 1968 C3 Corvette.

Refurbishing the latching system and weather seals on a C3 T-top Corvette.

» Read More
Upgrading the Turbo 400 in Your Corvette

We show you how to rebuild GM's Turbo 400 transmission specific to the Corvette application.

Corvette America shows us how they restore your C3 Corvette seat frames and tracks.

» Read More
How to Prepare a Car for Fresh Paint

We kill two birds with one stone: show you how to prepare a car for fresh paint, and get our '68 Corvette project ready for the spray booth.