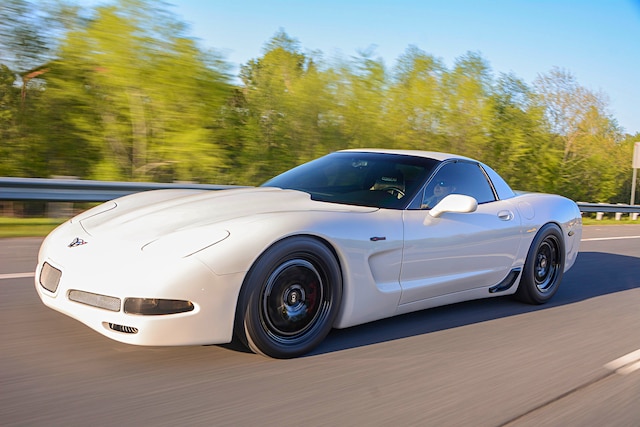 Rarity is something that Corvette owners have appreciated since the first one rolled off the assembly line. In the modern era, the rare options and color combinations don’t always equate to added value, but that day will eventually come. The good thing is that keeping track of those production numbers is much easier with modern cars. In the case of this 2001 Corvette Z06, it is a rare bird thanks to its exterior color: Speedway White. Although the C5 Z06 was available from 2001-2004, Speedway White was only an option in the model’s introductory year, and even then, it was a rare option. Only 352 of these cars were produced, and this particular combination really clicked with Brandon Atkins several years ago. Since then, he searched for the right car, and finally found it. The car was located in Raleigh, North Carolina, about 500 miles from Brandon’s home in Ooltewah, Tennessee. It was definitely worth the trip to get his hands on this clean, low mileage C5 Z06, and the car made it back home flawlessly.

The car had already been tastefully modified, but Brandon saw it as a blank canvas, and immediately started making it his own. Brandon admits that he can be a bit of a neat freak when it comes to his cars, so detailing the car came first and foremost. He also admits that this is an on-going project car, and he has hopes for as much horsepower as time and money will allow. Brandon is a firefighter for the Chattanooga Fire Department, so his job is demanding and this Corvette is the ultimate stress reliever when it’s time to clock out.

Thanks to the damage inflicted by those sticky tires, you’ll find a beefed-up three-rib differential packed with 3.42:1 gears, an ideal ratio for street performance as well as Brandon’s occasional trip to the half-mile drags in Clayton, Georgia. He also upgraded the stock torque tube with Driveshaft Shop couplers and added an East Coast Supercharging (ECS) differential brace to reduce driveline flex. A TREMEC T-56 six-speed manual transmission has been modified with billet shift forks, carbon synchros and hardened gears. A McLeod RXT clutch hooks up to a Ram billet flywheel to apply the power.

Brandon’s Corvette puts down 668 horsepower to the wheels thanks to a supercharged LS6 built by Cartek Racing in Garwood, New Jersey. The build started with the car’s original powerplant, which is an all-aluminum engine, coming in at 5.7 liters (346 ci). The stock crankshaft now slings a set of Eagle connecting rods and JE pistons. Cartek Racing utilized Clevite bearings, ARP fasteners and Cometic head gaskets for excellent longevity. Cartek also ported the 243-casting cylinder heads and milled 0.030-inch from the mating surface before assembling them with 2.02- and 1.57-inch stainless steel valves. A custom-grind camshaft from Comp Cams is blower friendly, featuring 114 degrees of lobe separation, a 224/228-degree duration split and 0.557/0.557-inch valve lift.

Though it looks stock, the original LS6 intake manifold is ported and features 80-pound fuel injectors, spraying a steady flow of 93-octane gas thanks to a Walbro 340 pump and Boost-A-Pump. The upgraded fuel system keeps the engine happy, even with the abuse of a Vortech centrifugal supercharger. The V-3 T-trim head unit is part of a kit from A&A Corvette Performance and it features a 3.33-inch blower pulley to make 17 psi of boost. The supercharger is upgraded with a Cartek eight-rib belt flip-drive assembly and features an A&A “Big Bubba” 52mm blow-off valve. An Alkycontrol dual nozzle M1 methanol injection system helps the LS6 survive aggressive boost levels on pump gas. In Tune Motorsports in Charleston, Tennessee, tuned the combination and cranked out 668 horsepower and 576 lb-ft of torque on a Mustang Dyno.

The noises made by the blower and the blow-off valve mix nicely with the radical exhaust note coming from the 1 7/8-inch Kooks long-tube headers, 3-inch pipes and B&B Bullet mufflers. A DeWitts radiator and SPAL electric fan combination keep the supercharged LS6 cool.

Aesthetically, Brandon’s Z06 is extremely clean and tasteful. The RKSport “high rise” hood keeps the original lines, but increases engine bay clearance by nearly 2 inches. It is color-matched to the original Speedway White and it takes a trained eye to even notice the upgrade, as it provides a natural look. The front bumper license plate area has been cut out to provide better airflow to the radiator and intercooler, while tinted lenses and LED bulbs add a bit of custom flair to this otherwise stock-bodied Corvette. Inside you’ll find more of the same mild modifications, including Corbeau A4 suede seats, fit with Corbeau five-point camlock harnesses. The harnesses attach to a Brey-Krause harness bar that tucks in behind the seats. An Innovate Motorsports boost gauge and wideband gauge supplement the original gauges, while a Kenwood DDX 470 Double Din unit replaces the stock stereo equipment.

So far, Brandon has mostly cruised his Corvette on the street, but he puts the 668 wheel horsepower to use on a regular basis. He raced it at his local eighth-mile dragstrip, and it spun badly on stock-type tires, running a 7.20 elapsed time at 104 miles per hour. Then he installed the CCW drag pack and broke several driveline components before he could make a clean pass. After the repairs, he decided to concentrate less on the short bursts, and more on the top end speed, so he tried his hand at half-mile drag racing. The car has run a best of 162 miles per hour in the half-mile, and it already has Brandon itching for more upgrades to get into the 170s. His future plans include an upgraded Vortech supercharger and E85 fuel in order to make more power. For now, he’s proud of the current setup, and thankful that the previous owners treated this Corvette so well. With only 33,000 miles on the clock, this Speedway White Z06 is a rare find, and Brandon’s attention to detail and his need for speed will only increase the car’s value over time.