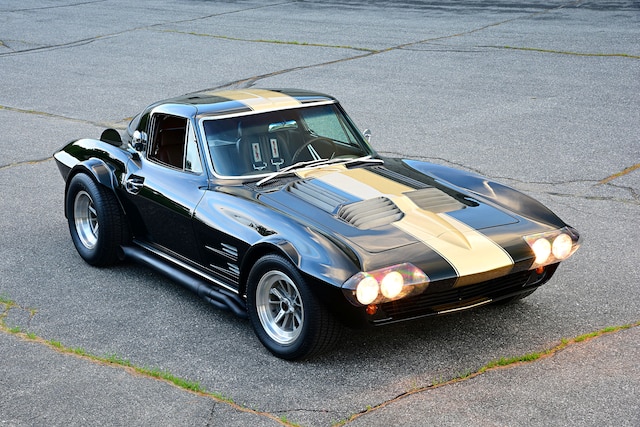 The early ’60s were truly a turning point for the high-performance world where Chevrolet, Ford and Chrysler had their engineers hustling horsepower at a feverish pace to maintain dominance on the street, dragstrip and road courses. It was also a time when the C2 Corvette was in its prime and its legendary engineer Zora Arkus-Duntov made the move to secretly develop it as a cutting-edge race car, giving birth to the Grand Sport. The lightweight, purpose-built racer featured a 377ci small-block V-8, an aluminum tubular space frame and a wicked power-to-weight ratio to make it a true contender on a road course. GM, however, cancelled the project after only five Grand Sports were built, making them some of the rarest and most coveted versions of the car amongst collectors.

At nearly the same time, 14-year-old Charlie Ranfos of Candia, New Hampshire, was feeding his automotive hunger by working at his uncle Angie’s Chevron station in nearby Manchester. Little did the youngster know that this passion would lead to the build of the 1966 C2 Grand Sport tribute presented here. The station was a hotbed of activity, with plenty of local muscle car owners stopping by on a regular basis. He eventually met good friend Dave Parris, who ran a small shop—located behind the station—dedicated to hopping-up muscle cars. Sharing the same enthusiasm for Chevrolet performance, Charlie wasted no time in getting into the game once he got his license. He owned a string of hot Chevys, including a ’64 Impala SS, a ’68 Camaro Z/28 and a number of Chevelles.

Charlie eventually opened is own shop, Auto Trim, Inc., focusing on custom upholstery for both classics and muscle cars. During this time, Charlie married his wife, Marleen, who not only helps run the business but also shares his obsession with performance. Before long, Charlie shifted his focus to C2 Corvettes, owning a number of small-block models before taking on his first full restoration of a big-block Mosport Green 1966 roadster. Once completed, he followed up with a big-block 1967 roadster for Marleen, while at the same time making plenty of visits to Corvettes at Carlisle in Pennsylvania to buy and sell parts with good friend Jet Thomas. If there was one quote that he lived by over the years it was that “there is no substitute for cubic inches.” The sheer exhilaration felt when accelerating in a C2 Corvette fueled by a big-block V-8 was unlike anything else he had ever experienced. Having always been enamored by the legacy of the original Grand Sport, with its history and racing capabilities, he decided to take on the build of one for himself, but with one exception ... it would have to be based on an original Corvette.

His search for a suitable C2 donor led him to a basket case ’66 coupe that was barely a roller, minus the engine and transmission. Seeing that the chassis and body parts were in workable condition a deal was made and the bits were hauled back to his shop to start the transformation. To get started, the chassis was completely disassembled, blasted clean and brought to Ron Gagnon at New England Rod Shop in Bedford, New Hampshire, to have it fully TIG welded and gusseted for extra strength. Gagnon also crafted a fresh rear crossmember and installed an updated C3 IRS spinning 3.73:1 gears. To complete the rear suspension, a composite monoleaf and tube shocks from Vette Brakes & Products were added along with rear offset trailing arm assemblies from Vansteel and a factory sway bar. Up front, to add plenty of razor-sharp handling, a manual steering box works flawlessly with updated upper and lower control arms as well as a composite monoleaf and tube shocks from Vette Brakes & Products along with a factory sway bar. For plenty of braking performance, a GM dual master pushes fluid through stainless lines to C3 Corvette discs and calipers mounted at each corner. Linking it all to the street you’ll find PS Engineering Grand Sport wheels sized 15x8 front and 15x10 rear complete with custom-machined hubs and knock-off spinners with safety pins. A set of BFGoodrich Euro T/As add plenty of grip, sized 245/50R15 front and 305/50R15 rear.

There was only one way to inject the right amount of adrenaline into the coupe and that’s with genuine big-block power. Charlie contacted R&L Engines of Northwood, New Hampshire, to build a fire breather starting with an original 1966 427ci block, which they massaged to perfection and filled with a stock forged steel crank linked to refreshed factory rods topped with forged aluminum Speed Pro pistons. A Comp Cams Street Roller stick sets a heavy beat while a set of Merlin iron heads from World Products filled with Manley Race-Series stainless valves make plenty of seamless power. Up top, a Weiand dual-plane intake gets fed through a 990-cfm Stage 3 Holley by the Carb Shop crowned with a classic chrome air cleaner. It all sparks to life through an ACCEL ignition and dumps spent gasses through a set of Hooker Super Competition headers to 4-inch matching side pipes. To move the goods, a rebuilt Muncie M22 by Old School 4-Speeds of Springfield, Vermont, packs a Hays 11-inch clutch and links to a custom driveshaft.

Taking on the exterior’s metamorphosis took plenty of time, skill and determination. When deciding on the build, Charlie maintained that he would craft the project from an original Corvette. Thankfully, he started with a very clean original body that came with a set of mint doors and all the related parts needed for the transformation. Being a true enthusiast, any items not needed were carefully removed and repurposed to other car owners who could use them for restoration projects. When sourcing the parts for the restyling he contacted Mid-America Industries for one of their Grand Sport conversions called the GS-2. They offered nearly everything needed to take on the transformation. Working with good friend Joe Gillooly, the pair started by carefully removing the front clip and followed by removing the rear clip. They continued by preparing the body for the new GS-2 sections to be mounted in place. To give the car a very distinctive look, Charlie had Ron Gagnon work his magic on the hood by adding custom stainless louvers to set it apart from the rest. The doors, trunk and hood were then fitted and all panel gaps were dialed in to make sure everything was perfectly balanced. This included modifying the original doors with updated door handle recess panels, installing the fuel filler and glass. From there, the pair made the body razor sharp and prepped it for paint. It was Ron Lavoie at Eastern Auto Body in Manchester, who handled final prep and laying down an immaculate coating of PPG Glenn Green accented by a Gold Sand Poly stripe, bringing it all to life.

Inside it’s all business, starting with a custom dash from Mid-America—as part of their GS-2 conversion—filled with factory gauges with the stock speedo recalibrated to 200 mph. An original Corvette three-spoke steering wheel carves the course while a Hurst Competition-Plus shifter pulls gears. For comfort, Charlie covered a pair of 1968 Corvette buckets in saddle leather and equipped them with Simpson Racing five-point harnesses. Matching side panels as well as leather-bound factory-style carpet complements it all. Inside you’ll also find custom aluminum panels by Mike Curley along with a four-point rollcage and ATI fuel cell with custom-fabbed mounting straps and fill tube by Ron Gagnon. Throughout the build, Mike MacCallister added plenty of mechanical expertise to various areas and Jay Doerfler of Auto Body Specialists in Manchester dialed the car in upon completion with all of the fine-tuning to make it completely road ready. The build spanned more than 1,000 hours over 15 years to create a visually striking C2 Corvette paying homage to the original Grand Sports. Seeing, hearing and watching it in action proves it’s the real deal.

Photography & Videography by the Author