1964 Tech: Man-A-Fre Induction Combines Carbs and Injection for Your Corvette

From the Archives: Injector Carbs 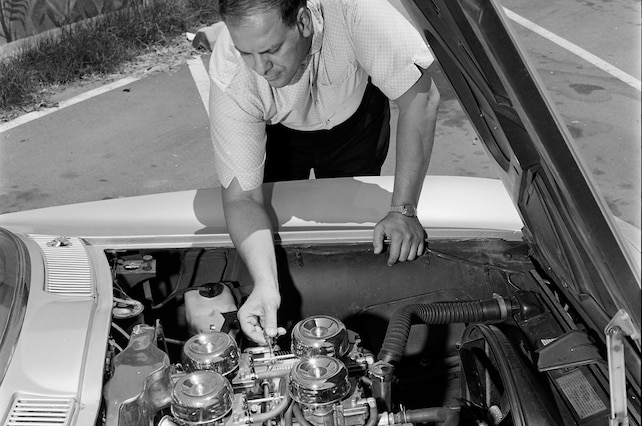 “Chevrolet and Corvette owners who have attempted to run twin four-barrel carbs on the street as well as on the dragstrip have long experienced difficulties of one kind or another,” wrote Bud Lang, Car Craft magazine’s technical editor, in the October 1964 issue. Those difficulties included “consuming more gasoline than the owner would like to admit,” carburetor flooding “during normal road cornering or road racing,” and “operating conditions around idling speed that were far from normal.” Yet a single carb “just hasn’t got what it takes when it comes to competition driving,” and mounting three or even four two-barrel carbs “still wouldn’t cut the cake.”

All that was preamble to Lang’s examination of an induction alternative, the Man-A-Fre direct-port plate system. The name, which meant “free from manifold passages,” described its design. It replaced a conventional intake manifold with an induction plate that located a two-barrel carburetor directly over each intake port. For 265- and 283-inch engines, four 1958 Chevy truck carbs were used, while 327-inch V-8s were fitted with bigger Olds carburetors. (At the time of Lang’s story, Man-A-Fre systems were not available for 348- and 409-inch W-motors, though systems were developed later for the Mk IV big-blocks.)

This setup “has completely done away with chances of one cylinder receiving a lesser fuel/air charge than another,” Lang wrote. “This can be likened to fuel injection, except that carbs are used for supplying the mixture.”

For those who are “really ‘wringing’ the Man-A-Fre at the drags,” an optional Afterburner unit was available. It positioned injector nozzles either in the base of the induction plate or in the top of each carburetor. At the press of a button, the injectors sprayed additional fuel into the ports, typically at higher rpm, “above 4,000, when an extra ‘shot in the arm’ is required,” said Lang.

Aside from curing fuel distribution ills, the Man-A-Fre had other advantages: The injector plate weighed only nine pounds, and it was thin enough that the carburetors “with air cleaners will fit under any Chevy (and Corvette) hood with inches to spare,” Lang said. In fact, Harold Graves, who manufactured and sold Man-A-Fre systems in Southern California, demonstrated an installation for Lang on a 1963 split-window coupe. Lang photographed the car, and the Man-A-Fre-equipped engine inside it, though Car Craft chose to run only photos of the components and an engine on a stand in its story. What you see here are outtakes that weren’t published.

Man-A-Fre systems can still be found today, though they’re rare. Hot rodders with hood clearance issues like them; so do those not running a hood at all. In fact, one of the most famous hot rods of all time, the yellow Deuce coupe in American Graffiti, had Man-A-Fre induction. If you want one for your Corvette, be prepared to do some swap meet or internet hunting. Then find today’s Man-A-Fre guru, Dave Petersen of Waukesha, Wisconsin, who makes these systems look brand-new again.

Graves’ demonstrator for the Man-A-Fre system was a split-window Sting Ray, to show off how well it fit under the hood.

At the time, two Man-A-Fre systems had been developed: one for 265- and 283 small-blocks, another for 327s. The difference was in the size of the carburetors.

This injector plate was the heart of the Man-A-Fre system. It weighed just nine pounds and positioned a two-barrel carb directly over each intake port.

This Man-A-Fre setup is equipped with short air cleaner bells and the Afterburner option. (Note the fuel log between the two sets of carbs and copper lines feeding the nozzles in the plate.)

The full-tilt Man-A-Fre, with Afterburner and injector stacks. The Afterburner nozzles were actuated via a driver-operated button, and were recommended for engine speeds over 4,000 rpm.