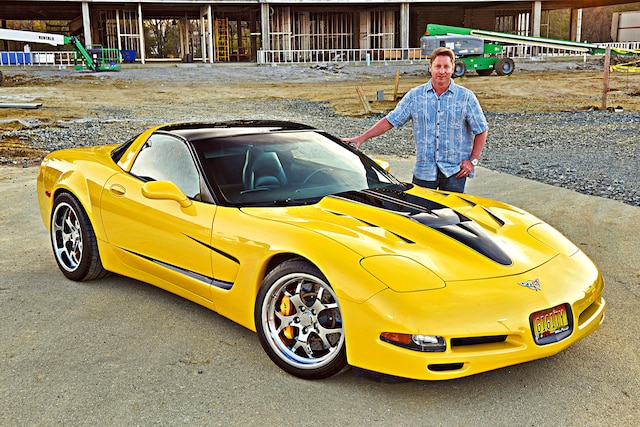 “I wasn’t really a sports car guy growing up,” says Jim Huber, owner of the slick, custom C5 Corvette on these pages. “I was more into big cars, trucks and SUVs that I could cruise with, and fit eight of my buddies in,” he proudly admits. But there was change in the air for Huber, and, boy, that mighty wind would blow in some mega-horsepower with it.

His migration toward the “faster” side of the car hobby started with a chance look-see at a hot C5 Z06 that a friend needed to sell. “That car made me start looking at Corvettes in a different light,” says Huber. A couple of weeks later he spotted a Millennium Yellow ’03 C5 in front of a dealership. “I really liked the color and style, and before you know it I was online looking to see what they wanted for the Corvette.”

Huber’s got a brother John, who’s not only a car nut, but is also a hands-on guy who’s been building hot cars since he was a teen. “I gave him a ring and asked if he would go check it out with me,” Huber says. Of course, John loved the car and asked Huber if he was going to pull the trigger. Huber knew he needed to confer with his better half before plopping down a fistful of Benjamin’s on a garage stuffer. Huber’s brother prodded him, telling him to just buy it; this coming from a guy on his third marriage. But Huber did the right thing, and after a two-day struggle, finally convinced his wife, Barbara, that they needed to have this car in their driveway.

So Huber did what he should do with the car; he drove the snot out of it. Living in Maryland, they were smack dab in-between the ocean and mountains, so Huber would just point himself in one direction and drive … sometimes all day long. He loved both the driveability and the looks of his 2003, and just couldn’t get enough of his new toy. To him, it was everything he wanted in a sporty ride. But that didn’t mean he wasn’t open to make modifications.

Once again his brother John would make a suggestion. This one would start the Corvette on a wild ride of modifications and upgrades that would keep Huber busy over the next decade.

Huber went to visit his brother one day at his house with the Corvette. Pulling in last, he blocked his brother’s car in the driveway. “No problem. Just take the Corvette if you have to go somewhere,” Jim told him as he threw him the keys. John sped off, returning an hour later. John hopped out and gave Jim a synopsis of his opinion on his ride. “The car had plenty of power, but has no launch and definitely needs a gear change to wake it up,” he said. And with those words, Huber started on a journey, or a mission, to make this C5 into the baddest custom C5 Corvette the East Coast has ever seen.

It only took two weeks, and Huber was off and running. He grabbed his bro’ and headed to East Coast Supercharging (ECS) in Cream Ridge, New Jersey, for a set of 3.73s to replace the 3.15 gears out back. By the time he left, the C5 received not only the gears, but a set of American Racing headers and a set of high-flow cats to boot. But before he left, Chris Coriell, a co-owner at ECS, took Jim for a spin in a supercharged C5. That blew Huber’s mind, and so without hesitation he came back two months later for his own blower setup on his Corvette.

“When I got it back, it was like a different car,” says Huber. With the supercharger and final tune, the Corvette was now pushing 550 rwhp, which maxed out the engine’s stock components. Huber went on to thrash the Corvette for the next three years, getting his money’s worth every time he got behind the wheel. But soon it became apparent, to remain happy, he would have to bring his C5 to the next level.

So in 2009, Huber readied the Corvette for its next round of modifications. “I called Doug and Chris at ECS and they built a new engine (5.7L) using LS6 heads and forged internals, and they did whatever other voodoo they do as well,” says Huber. The car jumped to 834 rwhp and 694 rwtq with those mods. Now cursed (blessed) with the “mod-bug,” Huber went on to get other things done over the next few months. These mods included new wheels, tires, suspension setups, exhaust systems (at least 15 different types) and LED lights. “I have boxes and boxes of parts that were installed for just weeks at a time … my brother calls it the land of misfit toys,” says Huber.

In 2011, Huber decided he had enough with the automatic transmission and went back to ECS for a manual setup. Of course, while his Corvette was there, he decided to have them build a new supercharged LS2 for it, which laid down 856 rwhp and 707 rwtq at 22 pounds of boost. With the increase of power, the sound of the car changed completely. It led Jim to add a second blow-off valve, and changing out the exhaust system once again, going to a Corsa Touring setup.

Two years later Huber was once again itching for more power, so Late Model Engines (LME) in Houston built him a new stroked-out 402ci LS2 short-block. The engine work was then finished-off by ECS, with the crew adding modified LS6 heads and a Paxton Novi 2000 Supercharger, which also pushed out 22 pounds of boost. The new powerplant only laid down 842 rwhp, but the torque output moved up to 750 rwtq. At that point Huber decided to address other issues he had with the car. He now wanted to do the ultimate C5 body mods and upgrade the exterior.

So the car was sent to County Corvettes in West Chester, Pennsylvania, to handle the duties. The car was torn down to the frame, and the body was modified with a new hood and flared fenders front and back. The 1 1/2-inch front and 2-inch rear flares helped widen the stance of the Corvette, with Huber now stuffing CCW (Complete Custom Wheels) SP-510s under the fenders; 18x10 up front and 19x13 out back. They are wrapped in Michelin Pilot Super Sports; 275/35ZR/18 and 345/30ZR/19, respectively. The aluminum wheels were chromed by California Chrome before mounting up the rubber.

The powerplant now is shifted by a fully built ECS M6 transmission, feeding an ECS stock differential, beefed up with hardened output shafts and stuffed with 3.73 gears. Go juice is supplied through a Stage II fuel system. American Racing headers get rid of the spent gasses efficiently, and an LG Motorsports coilover setup handles the suspension duties. And as far as the interior, Huber has kept it basically stock, except for some modern LED lighting.

Since the car was now in primer, Huber had any color from a large palette of paints to choose from. After some thought, he decided that he really wanted the Millennium Yellow once again, but this time he had the new skin finished off with several coats of pearl. The car was now ready to come back to Huber exactly the way he dreamed it would.

He picked up his finished ride at Corvettes at Carlisle in 2014. He was smitten with the reworked Corvette right from the start. “The car is an absolute blast to drive, and no matter where I travel, it always garners lots of attention and has been the start of many a good conversation,” says Jim.

He loves it so much that he drives it constantly whenever possible, racking up plenty of miles. “Because I drive the car so much, fighting the rock chips is always a battle. Even though I have Clear Bra on the rocker panels and front clip, I still get a lot of chips,” he says. So while repairing some chips, he had some more hood work done, as well as paint and door stripes. This was done at Black Dog Customs in Claymont, Delaware.

So for now, Huber is very happy with the way his custom ’03 Corvette looks and handles out on the road. It’s since been christened Gigity; a catchword from his favorite animated TV series. “I’ve had the car for a little over 10 years now, and I like it more today than the day I bought it,” he proudly states.

And, of course, there are accolades from his brother John as well. He’s surely proud of his little bro. But as we all know, projects are never done in the eyes of the owner and another change, well, might be just around the corner for this particular C5. “The interior is starting to show its age, so I have a feeling there’s another cash-ectomy coming in the near future,” he admits. We can’t wait to see it “done”! Vette