Sweet Number 16: After Owning 15 Novas, This One’s Staying for the Long Haul 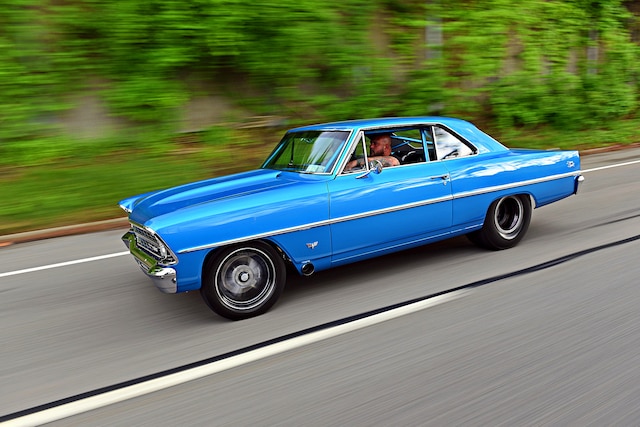 Favoritism sounds like it can be an undesirable practice. But believe us, in the long run it can be a good thing ... if we’re talking about a car, that is. Sticking with a favorite ride leads you down the path of a known entity; a familiar fascia in a sea of immense individuality. Familiarity can give you an edge, especially when running the course of fabrication and construction, and building that ultimate dream ride to call your own.

Lou Sedita is one of those guys that has taken his love for a certain Chevy model and turned it into the most downright obvious form of partiality we’ve seen in years. His love (or maybe lust) for Chevy’s compact Nova is quite apparent, having owned more than a baker’s dozen of them ... well, 15 to be exact. Little did he know, but sweet number 16 would soon become his greatest build yet.

His need to own Chevy’s compact started way back in high school, steamrolling on to this day. But it was back in 2013 that Lou felt the need to build his ultimate dream Nova, one that would put an exclamation point on the story of his obvious obsession. So he began looking for a starting point for his new build. He soon found that ride on an online auction site: a Marina Blue ’67 was his for the taking. “I had been looking for a ’67 Nova in this color for some time. They are hard to come by in good condition,” said Lou. The rust-free ride was in immaculate shape with only 32k on the odometer.

So Lou did what any of us would have done for his favorite model ... he flew 3,000 miles cross-country and looked at it in person. Seeing that it was even better than he thought, he quickly snatched up the compact and trailered it back to Long Island, New York, to start its transformation. His goal was to build a rad, boosted small-block and then forge his way to making this Marina Blue ride the ultimate street/strip twin-twisty terror. Game on!

Well, first things first. The Nova was immediately stripped down and the carcass was sent to Hell Bent Race Cars & Customs in Islandia, New York, where a round tube chromoly back half 8.50 NHRA certified ’cage was installed. But that was just the start. Next, they fit a FAB9 rearend along with a Rick Jones ladder bar setup, and nestled in a set of Weld Wheels V-Series beadlock rims (15x12 rear) shod in Mickey Thompson 295 Pro Bracket Drag Radials. Up front, a Chris Alston clip was installed. Strange Engineering front discs and a set of dual-caliper Strange discs out back to do the stopping on this beast. A set of Mickey Thompson street skinnies keep the car pointed in the right direction.

For motor-vation of this here ride, Lou stopped over at Heads-Up Racing Engines in Bohemia, New York. There, they built up a tough 406ci (4.155-inch bore x 3.750-inch stroke) small-block featuring a Dart Little M block topped with AFR heads, and spun by a forged Bryant Racing crank along with Carrillo rods and JE slugs. The compression was dialed to a boost-friendly 8.9:1 and the valvetrain consists of a billet solid roller cam and equally stout solid lifters. A twin-turbo setup was then custom-fabricated by Hell Bent using Precision turbos and wastegates, and featuring not one, but two intercoolers; to make damn sure this thing ran nice both on the street and on the strip. Once finished, the Nova was sent to John Balinsky over at OAB Racing in Hammonton, New Jersey, where the engine was plumbed-out and wired-up, using a Big Stuff 3 set up for E85, Precision fuel injectors, along with an MSD ignition.

Once the car was plumbed it was sent back to Hell Bent for its teardown. The body was sent over to Bona Fide Auto Collision in Patchogue, New York, where Carmine and Pat stripped the car to bare metal and massaged the body to a flawless perfection; even better than the factory did in 1967. Once the prep was completed, Pat resprayed the car with Spies Hecker waterborne paint, creating his own version of Marina Blue (he calls Big Sexy Blue) that looked fathoms deep on this Chevy ride. S&L Metals in West Babylon, New York, did all the restoration of the metalwork, making the aluminum and stainless shine like it did on day one.

Once again it was back to Hell Bent where the freshly painted body was reassembled. The Nova’s transmission is a Powerglide built by FB Performance Transmissions in Bay Shore, New York, running a bolt-together converter from Neal Chance Racing Converters. Once the powertrain was together, the ’67 was sent over to OAB where John Balinsky got the car running and did his magic on the dyno. Tuning the car on E85 at 24 psi of boost, this little Chevy made 1,400 horsepower at the rear wheels.

The interior is built with a deluxe interior with stock buckets up front. Knowing that he also wanted this to be a street friendly ride, the Nova was built with a complete backseat, custom built around the tubs, so Lou, his wife, and three young boys could enjoy a day out on the town. This Nova also features a Racepak display for all the needed gauges and has a Leash boost controller to help get those turbos tuned in just right. The transmission is controlled by a Precision Performance shifter.

Not only has this nasty Nova (now nicknamed Big Sexy by Lou) won numerous Best of Show awards at local events, this ride also has been able to rack up some impressive times at the track. But Lou’s hush on exactly how fast this car has gone over the last year. All we can say at this time is that they are pretty impressive numbers for a street car. “This is truly a badass car,” says the owner. Yeah, we get that Lou! He was also fast enough to be invited to a Street Outlaws event in Memphis this year, representing New York. It was filmed for the Discovery Channel and will air at a later date.

Thanks go out to all those who helped out in the build. A special shout-out goes to Lou’s dad and his family for their support during the build. Of course, another big thank you for all the people that gave their time and products to the process: Bona Fide Auto Collision, Heads-Up Racing Engines, Marc Poldino and Canish at Hell Bent Race Cars & Customs, and John Balinsky at OAB Racing. Thanks for making number 16, Big Sexy the sweetest one yet!