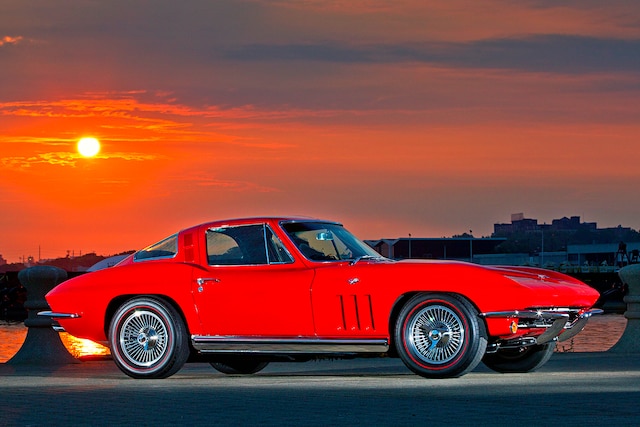 It was around 2004 when Ohioan, Larry Woods was at a car show with his big-block ’69 Corvette and overheard a comment that reversed the course of where he was headed with collecting Corvettes. In the past, Larry had owned a ’64 and a ’67 Sting Ray and had regrets about selling the two ever since. A fellow showgoer mentioned he noticed that midyear—that’s 1963-’67—Corvette Sting Rays were really starting to climb in price and it put Larry in a panic of sorts. Larry cut his ’69’s day in the sun short and made a call to his buddy Bob Dombrowski at Koolcars in Columbia Station, Ohio. Bob told Larry he had the perfect Sting Ray for him. It was a ’65 coupe project that’d been sitting idle since 1985.

It was still on the trailer; Bob had just picked the ’65 up from the previous owner that’d lost interest in completing it. The paint and bodywork had been done in Rally Red acrylic lacquer, and the chassis detailed nice enough to keep moving forward. Larry completed the coupe and drove it for 10 years, adding improvements as time passed.

For the second round of restoring the ’65 coupe, Larry wanted to add a lot of extra heat under the hood, but keep it a stock-appearing sleeper. Stock to the untrained eye, that is. Larry made subtle changes like adding a 1965 396 hood and Corvette America bolt-on replica cast-aluminum knockoff wheels. The tires are Michelin radials with redlines cut in by Diamondback. Originally, the coupe was 1 of 2,831 turned out in Milano Maroon, but Larry was happy with the previous guy’s choice of Rally Red and stuck with that.

The difference was Larry wanted an over-the-top, high-quality paintjob, so he went to the best shop he knew of. Enter Mitch Rudolph and his shop Excalibur Auto Body in Eastlake, Ohio. The ’65 was stripped down to the bare, never hit, fiberglass body and re-sprayed to a much-better-than-original finish. As a part of researching the ’65 coupe’s history, an inquiry to the NCRS running the delivery information revealed the coupe came from Greve-Daum Chevrolet in Northfield, Ohio, and was sold on March 13, 1965. Amazingly, the now defunct Chevy dealer was only 2 1/2 miles from Larry’s house.

It was around a 3 1/2-year build, but not everything happened at once. Upgrades like adding fuel injection were handled afterward and installed as weekend projects. And Larry said he didn’t do it all, “it was thanks to my buddy Jerry Bullock letting me use his shop and helping with the wrenching, and Koolcars was a big help in supplying all the parts.”

Under the hood and inside the transmission tunnel is where a lot of attention was paid to performance. Corvette Conspiracy in Cleveland went to town on a 1971 400-inch small-block. Inch wise, a mild bore took the displacement out to the Chevy friendly number of 409 with the results bringing another nostalgic number: 413 horsepower at the rear wheels. Mopar guys are stilling crying on the Internet about the lyrics to “Shut Down.”

Starting at the bottom end and working up, the rotating assembly is an Eagle crankshaft hung with Eagle steel I-beam rods and 10.2:1 Mahle pistons. The top end is a pair of port-matched Trick Flow aluminum cylinder heads topped with a Pro Products aluminum intake manifold. A Comp Xtreme Energy hydraulic roller cam opens valves wide to ensure every squirt of gasoline pumped by a Bosch electric pump to an Accel Gen 7 multi-port EFI combusts when the mixture meets an MSD spark box. Doug’s long-tube headers complete the combustion cycle. The transmission supplanting a Muncie four-speed is a TREMEC TKO 600 five-speed with a McLeod clutch. The rearend is a stock ’65 Corvette IRS with 3.70 gears and Positraction.

Inside the coupe is where Larry got to enjoy the fruits of retirement by having the time to discover he’s pretty darn good at doing interior work. Inside is a combination of Al Knoch and Corvette America upholstery and carpet products custom fit to satisfy the pickiest of critics. Driver freedom to move was increased with a Flaming River custom tilt steering column paired with a Fat Boy custom teak steering wheel by Eric Freeman. A quicker 12.7:1 steering ratio was realized with the installation of a Borgeson power steering conversion kit. The greatest overall contribution to driver and passenger comfort was installing air conditioning by Vintage Air.

Larry’s ’65 is a real sleeper in the looks department and with the suspension work done by Corvette Conspiracy that included using a Muskegon rear spring and Ridetech adjustable shock absorbers he reports, “it’s a real pleasure to drive.” And drive it he does. It’s won awards at Corvettes at Carlisle, Piston Power in Cleveland, and he intends to drive it to Corvettes at Carlisle for many years to come.