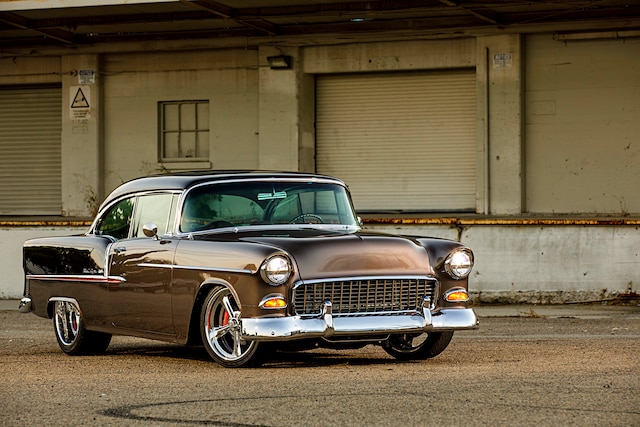 Sometimes the most interesting deals come along when you’re not really looking for them, as was the case of this impeccable Tri-Five owned by upholstery expert Mark Lopez and his wife, Leticia. Way back in 2005, Lopez found himself in a discussion with a client who offered up the car for sale. The client had purchased the car as part of a package deal to get the car he really wanted, and this one ended up going up for sale.

“I wasn’t really interested at first because I was already working on a ’35 Chevy two-door sedan project, but I couldn’t resist the curiosity to have a look at it. After assessing the car, I decided to buy it. I guess when you’re a car guy, you can never have too many projects,” says Lopez.

At the time, the car was completely original save for a respray, which had been completed sometime in the past, and Lopez’s initial plan was to yank out the tired 265 and drop in a 350ci small-block Chevy engine he already owned and use the car as a daily driver.

“It looked OK, but it had a few rust blisters coming through the paint,” he says.

You can see where this is going.

After pulling the 265, he came across some unexpected rust on the firewall, and as he tells us, “that’s when the plan changed.” We’d say so ... this rust kicked off an 8-year-long build process that culminated in the beautiful piece of machinery seen here.

Since his meticulous nature required a rust-free car—regardless of the car’s intended purpose—he decided to snatch the body off the frame and send it off to Calblast in Upland, California, to have it sodablasted to remove all of the paint and rust. When he picked the car up, it needed more work to repair the rust damage than he originally expected. Good friend and metal craftsman Mike Portolessi (Uncle Mike) offered up a bay in his shop, and Lopez jumped at the opportunity to be guided by a master during the repair process.

All of the damaged sheetmetal was cut out, and new steel from Danchuk was installed under the tutelage of Uncle Mike and Jose Gomez. Lopez turned to the chassis, where a full complement of pieces from Total Cost Involved (TCI) took up residence underneath the car. TCI’s 2-inch drop spindles and 2-inch drop springs combine with Belltech shocks to set the nose of the car 4 inches lower than its original position.

TCI’s four-link parallel-bar suspension with RideTech coilovers locate a shortened Ford 9-inch rearend housing that has been filled with 31-spline Currie axles and 3.70:1 gears spinning a Posi differential. Wilwood brakes with 12-inch rotors have been installed at all four corners, and a Wilwood master cylinder directs the pressure to the appropriate places when the whoa pedal is engaged.

Then it was time to direct his attention to mating all of the components to the car. Friend and welder Nash Moncayo helped with the process of setting up the suspension components and reinstalling the body to the chassis.

With the suspension sorted out, Lopez turned his attention to the powertrain. Not wanting to leave power production to chance, he enlisted Steve Brule and the engine wizards at Westech Performance to assemble a mean 400-cube small-block Chevy engine based around one of Dart’s engine blocks, which arrived already bored to 4.125 inches. Brule installed a 3.750-inch-stroke forged crankshaft, 10:1 hypereutectic pistons, and I-beam connecting rods to set the foundation of the powerplant.

A set of RHS Pro Action 180cc cylinder heads sit on top, with valves actuated via one of Comp’s camshafts measuring 0.502-inch intake and 0.520-inch exhaust lift, set up for serious street duty. Lopez departed from the norm with respect to induction by selecting one of Inglese’s 8-Stack fuel-injection systems, which stands proud atop the manifold and really helps to set this car apart. It’s fed by an electric in-tank pump from Aeromotive. MSD’s Street Fire ignition sets the fuel aflame and a set of ceramic-coated headers lead into a custom stainless-steel exhaust system. A four-row Be Cool radiator combines with one of Edelbrock’s water pumps to keep the engine cool while cruising.

To dress up the engine, one of Eddie Motorsports’ S-Drive engine accessory serpentine drive systems is used, and GM Performance aluminum valve covers complete the look. No cruiser is complete without climate control—especially in the warmth of SoCal where this car is used—and to that end one of Vintage Air’s HVAC units is installed. The entire car was wired by Zac Phillips of Zac’s Hot Rod Refinery.

Transmission duties are handled by an Alberto Diaz-built 700-R4, and one of The Converter Shop’s 2,000-stall fluid coupling units, running through a custom-built Inland Driveline driveshaft.

Final reassembly of the car took about a year and a half, and then it arrived at Elegance Auto Interiors—where Lopez works his magic—for upholstery. But it’s not just any upholstery; a pair of Lexus SC400 power buckets combine with a custom rear seat, custom panels with concealed audio system, and a custom console. The chrome dash accent moldings were handcrafted by Lil Louie in San Bernardino. The seats and panels were covered by Lopez and his team in Espresso and Light Mocha Italian leather with Mandarin accents, and the German Loop carpet’s Coffee color is as intended.

The sound system, installed by Carlos Rodriguez at The Art of Sound in Upland consists of an Alpine IVE-W530 head unit and an Alpine PDX-V9 five-channel amplifier. Focal 165KR 6.5-inch front and PC690 6x9-inch rear speakers combine with an Alpine Type R 10-inch subwoofer to provide just the right amount of sound.

The exterior of the car—covered in PPG Envirobase Luxury Brown up top, Sunset Bronze on the body, and with Toxic Orange accents—was possibly the most difficult part of the build to dial in.

“It took me two-plus years working on it at night, a couple hours at a time, and most Saturdays, blocking and sanding over and over again. When I was satisfied with the body, I fully assembled the car before taking it all apart again to paint and plate everything,” says Lopez.

“Javier Garcia and Louie Vasquez did all of the paintwork, which included painting the chassis and belly of the car to match. When I tell someone my car is brown, most don’t envision it like it is. But when they see it, people compliment me the most on the combination of colors. It took many spray panels to dial them in, but when I decided, there was no doubt.”

The process of building this car was long, difficult, and filled with challenges. He’s especially grateful for the guidance of Uncle Mike, who gave up the spot in his shop for five years while Lopez was turning water into wine. Once he began, it became an all-or-nothing proposition, and we see which road he took.

“It took a lot of work and dedication. There are no compromises on this one—I built it exactly how I wanted,” says Lopez.

Wondering what happened to that two-door ’35? He’s back to working on it, and if this project is any indication, that car will be just as spectacular.

Ridding your Tri-Five of Decay with Replacement Rear Quarter-Panels