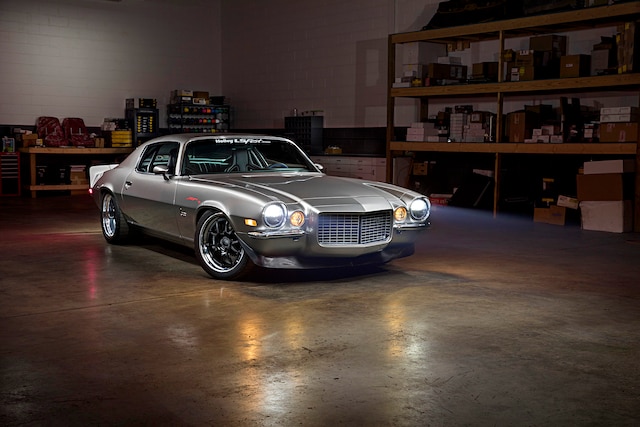 By today’s standards, a second-generation Camaro with subtle paint and a lowered stance can easily blend into traffic given its sleeper-esque vibe, allowing it move amongst the normal flow without raising an eyebrow. Being a sleeper doesn’t always have to equate to a sedan packing a built V-8 with a shot of nitrous, lack of flash, and dog dish hubcaps as it did in years past. Using today’s cutting-edge technology, a clean-looking muscle car can possess Ferrari-hunting skills ready to take on the competition in a moment’s notice. Imagine the complete surprise of a supercar owner getting dusted by a car that in their opinion doesn’t have the proper look or lineage … priceless!

For Tom Tomlinson, of Bowling Green, Kentucky, the challenge was to create a multilayered muscle car embracing the classic lines of a revered factory design with amazing capabilities once you peel back its skin to reveal the ultimate in modern suspension dynamics and engine development. The fusion would create a car with unparalleled performance and dependability, able to cruise local streets as well as take on the autocross and road courses during track days.

As President and CEO of Holley Performance Products, Tom’s automotive background dates back to growing up in the early ’60s when the advent of muscle cars was taking over the streets. Reading an endless stream of magazines like Hot Rod, Car Craft, Super Chevy, and Rod & Custom for the tech articles and features fueled his automotive skills and knowledge of the performance aftermarket.

While many memorable cars and projects have passed through his garage over the years, there are a few that left a long-lasting impression, especially the jet-black ’69 Chevy Caprice he discovered on a used car lot right after graduating from high school. The car sported hideaway headlights, Corvette Rally wheels, and 427ci badges on the fenders and immediately garnering his attention. Lifting the hood revealed the big-block was still in place, making it a true sleeper, packing the ultimate surprise.

As the years passed, he would religiously follow all of the legendary first-gen Camaro builds by Mark Stielow, cataloging all the information he could in hopes that the knowledge would eventually work its way into the future build of a second-gen Camaro for himself. Finally ready, he started his quest and eventually located a suitable base to start with on eBay. The car was a relatively clean, stock ’73 Camaro LT/RS that had lived most of its life in California, featuring a 350ci V-8 linked to a four-speed.

A deal was made and the car changed hands, along with some interesting history discovered after its arrival. It seems Phil Schilling, then Managing Editor of Cycle magazine, originally owned the Camaro. With help from then Tech Editor Patrick Bedard at Car & Driver magazine, the car was ordered as an LT/RS knowing it would be one of the last small-bumper Camaros to roll off the assembly line. The car was later featured on the cover of Classic Auto Restorer magazine, highlighting Phil’s 19 years of ownership and the potential future value as a collector car; now that’s pretty cool. With the title of the car now in hand, Tom embarked on a 5-year journey to inject the Stielow formula into it while working with many of the industry’s top performance leaders. The plan was to create a modern-day sleeper, the proverbial wolf in sheep’s clothing with substantial tires on the pavement, big brakes, memorable handling, and over 700 hp on tap.

Being totally hands-on throughout the project, Tom—assisted by his son Chad—began with the disassembly of the car. They cataloged all of the parts throughout the process in preparation for it being delivered to Kyle Tucker and his team at Detroit Speed (DSE) to take on the suspension dynamics. Starting out back to deliver the power to the street, DSE first prepared the car for a massive rubber infusion by installing their 18-gauge mini-tubs. They followed up to achieve elite handling by preparing it for an upgrade to DSE’s QUADRALink rear suspension. The system features their exclusive four-link geometry design with Swivel-Link, high durometer rubber bushings, DSE/JRi double-adjustable coilover reservoir shocks, 1 1/4-inch antisway bar, Panhard bar, and subframe connectors. A DSE 9-inch Ford housing features a Strange Engineering aluminum centersection with Truetrac spinning 3.73:1 gears built to Tom’s width specs. It packs a Stielow punch, incorporating axle ends using Corvette C6 hubs and custom axles that function as a full-floater utilizing Corvette C6 calipers and e-brake components.

With a car designed to handle plenty of ferocity, you’d better be able to control its stopping power. Tom incorporated a Corvette ZR1 power master flawlessly matched to a Bosch Motorsports ABS system pushing fluid through stainless lines to Brembo/C6 Corvette six-piston front and four-piston rear calipers with matching slotted rotors anchored at each corner. A DSE “Detroit-Tuned” power rack-and-pinion links it all to the street with a set of breathtaking Forgeline GA3 three-piece forged aluminum wheels in satin black centers with polished lips sized 18x10 front and 18x12 rear. For plenty of performance to deliver the goods, BFGoodrich g-Force Rival S rubber sized 275/35R18 front and 335/30R18 rear gets the job done.

If you’re going to make a statement, you’d better do your homework when it comes time to upping the ante in the engine bay. Tom contacted Brian Thomson of Brighton, Michigan, to work his magic on a 7.0L LS7, bringing it to a whole new level. First, he massaged the 427ci displacement to 442 ci, increasing the stroke from 4.000 to 4.125, via a Callies DragonSlayer crank linked to Oliver forged I-beam rods wearing Teflon-skirted Diamond forged pistons to up the compression to 12:1. A set of ported LSX-LS7 aluminum heads make plenty of power and a Comp Cams hydraulic roller stick adds just the right bump. Up top, a factory LS7 intake and throttle body combined with LS9 fuel injection gets fed from a pair of Cadillac CTS-V fuel pumps to complete the package to generate a rock-solid 706 hp on the dyno.

More notable components include a C&R Racing Denso 48mm core aluminum radiator with integrated cooling for the engine oil and power steering, Holley tall cast-aluminum valve covers, and custom air cleaner housing by Sled Alley. It all sparks to life through Chevrolet Performance coils and sensors driven by a Holley Dominator ECU. Spent gasses dump through a set of custom-designed and fabricated 304 stainless steel Hooker BlackHeart headers and 3-inch exhaust with X-pipe by Doug Marino, Senior Exhaust Engineer at Holley (these headers and exhaust are now available from Holley). The goods push rearward through a TREMEC T-56 Magnum six-speed trans assembled by D&D packing a Centerforce DYAD clutch disc. It’s supported by a custom-designed and fabricated trans crossmember by Tom, who also engineered the hydraulic clutch pedal geometry and pedal in CAD, with the final link to a driveshaft by Dynotech.

From DSE, the car was then brought to Matt Gurjack at Sled Alley Hot Rods in Detroit to have the team get busy adding endless details to the build, starting with the flawless execution of the engine bay. Working with Tom, they reworked the original radiator top plate to accommodate the C&R radiator, retained the factory RS diagonal bracing, stripped and replated all the hardware in a factory zinc coating, and completed all the plumbing. Tom, having seen plenty of Pro Touring second-gens that had worn through their inner fenders due to extreme use decided to avoid that situation by crafting his own custom bucks to form new ones. To take on the job, he first removed the front springs to compress the suspension, allowing adequate clearance for its full articulation and lock-to-lock steering range. The panel forming was then handed over to his son Blake who built hammer forms and shapes to craft the new inner fenders from steel, making them look factory perfect.

The Sled Alley team then stripped the car clean and began the restoration process by metal finishing the body and setting all the gaps to perfection. Per Matt, the second-gen body was the “cleanest and most original factory sheetmetal he had ever worked with” requiring no damage repairs, only the deletion of a few of the factory insignias (four of the original nine) to get the desired look. In deciding on a color, Tom wanted to achieve a subtle look with a hint of elegance, so he decided on a coating of late-model Porsche Platinum Silver Metallic. To lay down the vibe he enlisted the skills of Paul and Joe VanNus and team at Dutchboys Hot Rods of Kalamazoo, Michigan, to complete the bodywork, make everything razor sharp, and spray the PPG Envirobase basecoat and Glamour clearcoat, bringing it all to life.

Inside the car is all business, starting with the factory dash updated with a custom gauge panel by Holley Design Engineer Greg Whittle and meticulously painted by Holley Engineering Technician Luke Embry to cradle a bevy of Holley EFI gauges to monitor the vitals. A MOMO steering wheel keeps it all on course while Vintage Air cools the cabin and shifts move through a Hurst stick. Sled Alley continued on by adding Recaro racing seats and Schroth Racing harnesses, updated door panels, carpet, and fully custom wiring that was completely hand strung. Cool bits include a custom radio delete panel and custom-fitted panels by Sled Alley and wrapped interior panels by SPC Interiors along with a DSE rollcage and custom trans hump by Blake.

This is truly a car that will stand the test of time with its tradition intact combined with cutting-edge performance in a package that embraces the best union of looks, handling, acceleration, and braking. We know that Tom will exercise it on both the street and track, and to us that’s the best of both worlds!