The Tires That Bind: A lifetime of stories were built around this 1966 Chevelle 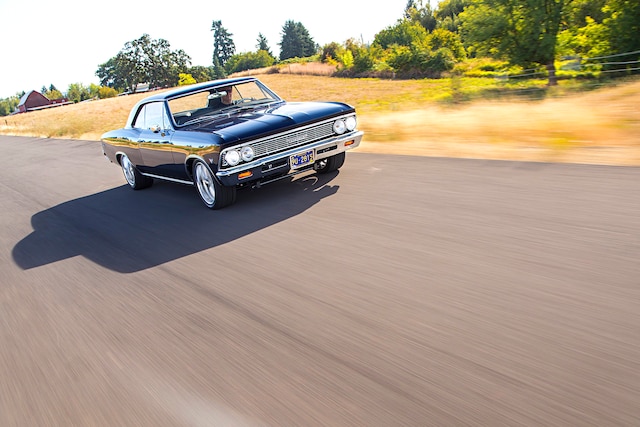 As someone who sacrificed to do so, I always figured that keeping your first car is the ultimate measure of an enthusiast’s resolve. I mean, yeah, there are a handful of us who can brag of keeping their first car that they bought new. But I always felt like it couldn’t get much better than that.

Then I met Doug Vanderschuere. Whatever bragging rights I felt I had suddenly felt pretty weak; more than his first, this car has been in his family since new. And his parents didn’t just buy it new; they ordered it. But not even that compares to this next part: a month after they took delivery of it, they took delivery of their son, Doug. Yeah, this Doug. I mean, the thing could be a clapped-out Celebrity sedan and I’d still get warm and fuzzy about it just for that story. (I’m sentimental that way.)

As luck would have it, Mr. and Mrs. Vanderschuere bought the right car. And it was the perfect car for a newly minted gearhead in the early ’80s. “I drove friends around town and on road trips for years,” he recalls, relating a story about how he, one of those friends, and the friend’s father rebuilt the engine over the summer after high school. “I continued to drive it occasionally after I was married and even brought our first born home from the hospital with this Chevelle.” The arrival of a second kid kind of put the Malibu on the back burner, specifically his dad’s machine shed. “I knew someday I would restore it.”

But unlike most who aspire to restore, Doug actually followed through. “When we started the project the car had been covered in a shed for about 14 years,” he reveals. “We noticed the rust spots had gotten worse, the interior was ruined by rodents, and a few new dents and scrapes were on the body.” Rather than get it running again, Doug and his dad, Dick, began disassembling the car and labeling the pieces.

Doug had a good idea of how the car would go back together. “Over the years, I followed trends in car magazines and went to an occasional car show, but when I first saw Pro Touring cars I knew that was the direction I wanted to go,” he says. “The idea of re-engineering some of the systems while keeping the car clean, simple, and elegant captivated me.”

Naturally, the path wasn’t quite as straightforward as Doug anticipated. “The most challenging part of this project was adapting to the expanding scope and level of detail that we ended up with,” he admits. “I initially thought it would take three years to complete, but once I decided to do the LS swap and raise the level of finish I wanted, I had to reset the timeline several times.”

Doug relinquished the advanced tasks to the pros at A&M Deluxe Customs. “They were a very big part in bringing this car from concept to its final state,” he insists. The A&M crew did all the metal restoration; a lot of fabrication, including the dash, firewall, and air intake; and even much of the closeout work like plumbing, assembly, and fit-and-finish. So pleased is Doug that he said he’d change only one thing: he’d install electric cutouts in the exhaust system to make two modes, “one for nice enjoyable cruising and another loud enough for my father.”

It’s safe to say that Doug Vanderschuere has a lifetime of stories. Even the reconstruction part is woven into the family lore. “Over the six years of the re-engineering project, I truly enjoyed spending evenings and weekends with my father in his shop wrenching on it and just talking about things,” he says. Which really gets to the heart of what actually matters: the people. The cars merely bring us together.

And for a car to actually bring a family together, well that’s probably more romantic than any of that other stuff about owning a car for a long time.