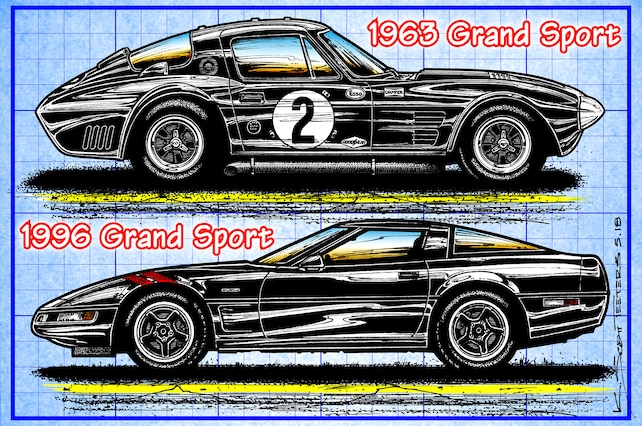 First was his RPO Z06 suspension option that debuted at the 1962 L.A. Times Grand Prix race. Four Z06 Sting Rays were released to Mickey Thompson, Bob Bondurant, Jerry Grant and Dave MacDonald. Also making its debut was Carroll Shelby’s 289 Cobra. The Cobra should have won the race but broke an axle, allowing Thompson’s Z06 to take the win. Corvettes didn’t get the upper hand again until the arrival of the L88s in 1967.

Duntov’s second project was called “The Lightweight.” To understand The Lightweight we have to go back to the summer of 1961 to Dave MacDonald’s family garage. MacDonald was one of a handful of young Californian drivers that were making names for themselves, and Duntov and Shelby were watching MacDonald’s career. Shelby advised MacDonald and his racing partner Jim Simpson that they should get a Max Balchowsky purpose-build race car. Max and Ida Balchowsky were the go-to team in the late ’50s and early ’60s for purpose-built road racing cars. MacDonald and Simpson bought a Balchowsky running chassis and custom-built a 7/8ths-size fiberglass ’61 Corvette body. When Duntov learned what the guys were doing, he visited MacDonald’s home garage. Purpose-built race cars were not new; however, this might have been the seed of Duntov’s Lightweight ’63 Sting Ray.

Semon “Bunkie” Knudsen was the general manager at Chevrolet in 1961 and was an avid supporter of racing. Knudsen OK’d Duntov outlaw project, as Chevrolet was still under the 1957 AMA Racing Ban. The Lightweight was a 7/8ths scale Sting Ray with a tube frame, lightweight suspension components and no amenities. Only five cars were built, but Duntov planned to make 125 to homologate the cars for competition as “production” Corvettes.

By the time The Lightweight made its testing debut at Sebring in December 1962, it was renamed “Grand Sport.” But the Grand Sport was dead-on-arrival thanks to the automotive press questioning GM President John F. Gordon about the Mystery 427 Impala recently seen at the Daytona 500. Embarrassed, Gordon abruptly said, “GM does not race!” Knudsen was called on the carpet for a serious dressing down and nearly lost his annual bonus!

Duntov was ordered to stop all Grand Sport efforts and scrap his plans for a Le Mans invasion. Duntov lent three of the five Grand Sports to some of his favorite privateer racers, but since the cars were undeveloped, they were not successful. Around September 1963, Duntov called in the cars for some major upgrades, including experimental all-aluminum 377-cid Weber-carbed engines, big fender flares to cover the oversized wheels and tires and a big hoodscoop. The Grand Sports looked mean and stomped the Cobras at the Nassau Trophy races in late November/early December. In March 1964, three Grand Sports raced at the 12 Hours of Sebring with the Roger Penske taking a class win with his #005 Grand Sport.

That was essentially the end for the Grand Sports. Without factory development, they were soon obsolete. All five Grand Sports escaped the crusher and were quietly sold to privateers. The cars were raced and resold many times and, amazingly, all five still exist. But by the mid-’70s, the Grand Sports were mostly forgotten. By the ’80s, the cars started to resurface at Corvette shows. A few kit car companies offered replicas but had the wrath of GM come down upon them. Today, Superformance offers official GM-licensed Grand Sport street cars and Duntov Motors sells licensed Grand Sport race cars. Then came 1996.

The ’96 Grand Sport was Corvette Assistant Chief Engineer John Heinricy’s baby. Special edition Corvettes are hard to produce from a production standpoint, but the easiest pathway is to use existing parts to minimize costs. The styling department pitched a design by John Cafaro that mimicked the 1963 Grand Sports of Penske and Foyt. The theme featured a blue car with a wide white stripe, red fender hash marks, blue door handles and black wheels and brake calipers.

To provide more grunt, they simply used a few racer tricks; let a little more air in, added a little more fuel, new roller rockers and revved it higher. The end result was the LT4 engine. To make the modified engine cost effective, the LT4 was an open option for all ’96 Corvettes. A total of 6,359 LT4-optioned Corvettes were sold in 1996. To handle the extra power, painted-black ZR-1 wheels shod with 275/40ZR17 on the front and 315/35ZR17 on the rear were part of the package. To cover the wider rear tires, fender flares were added. Convertible Grand Sports had smaller 255/45ZR17 tires on the front and 285/40ZR17 tires on the rear, and no rear fender flares. Interior choices were black or a black/red combo.

In 2009, heads exploded upon the release of the 638-horsepower, 205-mph ZR1. So, in 2010, no one was expecting another separate model Corvette. But the Corvette world fell in love with the Grand Sport, which instantly became the most popular of all of the C6 Corvettes. The mix was amazingly simple and brilliant.

Thanks to the Internet, the C7 was the most anticipated Corvette ever. No sooner had the ’14 Stingray made its debut when Corvette fans were asking where the Z06 and the Grand Sport were The Z06 arrived in 2015, but Grand Sport fans had to wait until 2017. Corvette product planners used the C6 formula: Z06 widebody configuration and aero packages, suspension and brake upgrades, with the standard 460-horsepower, 465 lb-ft of torque LT1 engine. And like all C7 Corvettes, the Grand Sport is available as a coupe or convertible, and with a seven-speed manual or eight-speed automatic transmission. With a staggering array of options, customers can totally trick out their Grand Sport.

The reviews are unanimous; with the Z06-size wheels and tires and suspension upgrades, the Grand Sport is better able to utilize the base engine’s horsepower and torque for spirited street driving. The 650-horsepower Z06 is a wonder, but is more suited for the track than the street. The Grand Sport is a high-performance “street” Corvette, more akin to a ’67 427/435 L71, but with nearly triple the gas mileage. So, when the mid-engine C8 Corvette comes out, will there be a Grand Sport version? I sure hope so.

Illustrations and Graphics by the Author